Serious conversations about the nation’s fiscal position should accurately reflect the underlying economics of the nation’s debt, but changes in how the federal government handles student loans have made this task more difficult. The new direct lending regime for student loans has resulted in almost $1 trillion being added to the federal debt held by the public, yet it was scored by Congress Budget Office as lowering the nation’s annual deficits when it was enacted. In reality, the changes in student lending have no impact on Uncle Sam’s actual economic liabilities. What it has meant is an increase in debt held by the public that does not reflect any worsening of the government’s actual fiscal position, and a need for deficit followers to be more careful in how they use facts to try to make their point.

So while a lower deficit and rising debt seem like a contradictory statement, it is accurate as a result of how the student loan program works. In 2010, Congress changed the federal student loan program: all new loans would be made directly by the government, as opposed to the prior regime when most loans were guaranteed by the federal government but were made by private banks.[1] The basic economics — liability for defaults – still lies with the federal government but how this liability flows through to the public debt is completely different. Here is where the numbers and reality diverge.

The move to direct lending changed all that: the federal government now has to provide the actual loan funds that go to the higher education institution, which requires the federal government to actively borrow by issuing more Treasury debt, which in turn increases the debt held by the public. This change has had an impact on Uncle Sam’s books — before the switch in 2010, direct loans were around $150 million. Today they approach $900 million (out of more than $1.2 trillion in total student loans — a figure that continues to rise rapidly). 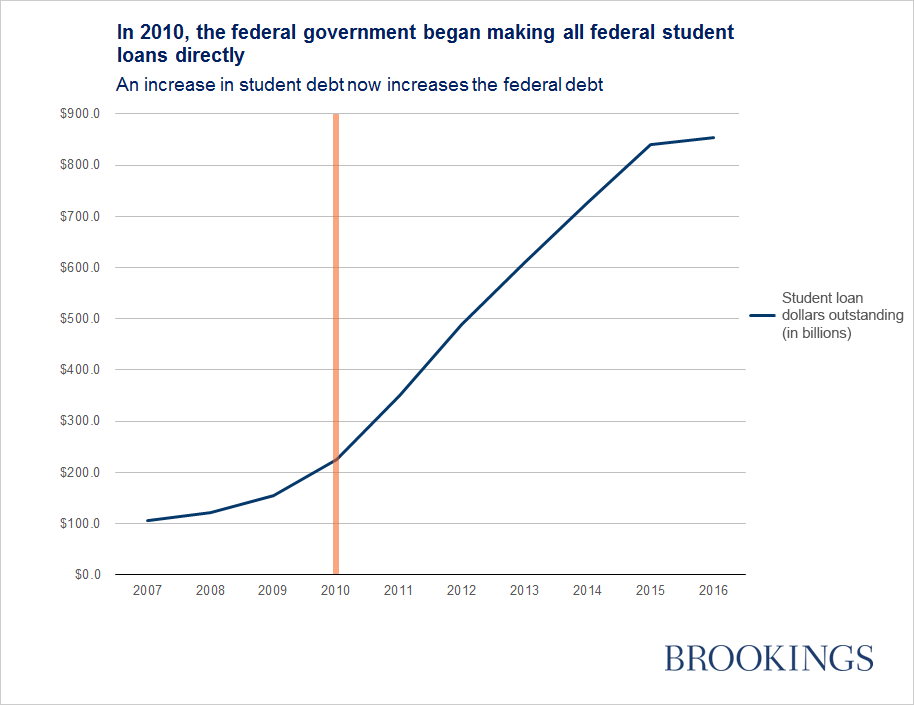 Debt held by the public has risen about $4.5 trillion since the end of 2010. Approximately 1 out of every 7 dollars of that increase is due to the move to direct lending for student loans. That figure will continue to rise as new student loans are made to next year’s incoming class, while existing loan holders continue to pay off their old, bank-issued student loans. As college tuition continues to rise and the overall federal budget deficit shrinks from where it was in 2010, the impact of direct lending will be even larger on the discrepancy between the rise in debt held by the public and the improving position of the federal deficit in the near term.

Deficit hawks who continue to be concerned about the nation’s long-run fiscal sustainability can and should still use debt held by the public to make their case. Simply pointing to the change in the amount of debt held by the public can be as misleading and confusing as the government’s own accounting. A proper analysis must correct for the change in student lending which has not impacted the federal government’s economic liabilities.

[1]
Technically the government would guarantee on the order of 98% of the loan, but this analysis does not consider the 2% of private skin in the game or changes in loan servicing compensation system.

[2] There are loan servicers who may be banks or bank affiliates who handle the repayment. This is similar to the mortgage lending space where the government may own or guarantee a loan but relies on private servicers.

[3] Graph source is the Department of Education. Note that 2016 student loans will go up in the fall when the next academic year begins, so one should expect that the curve is still rising: