Great teachers have the ability to transform and enrich the lives and living standards of Americans. According to recent research, a student’s kindergarten teacher has long-lasting influence on important lifetime outcomes, such as future earnings. These effects are so important that the difference between having an above-average kindergarten teacher and a below-average kindergarten teacher could translate into a difference of more than $300,000 in future earnings for a classroom of 20 students (Chetty et al. 2010). Therefore, continuing to attract and retain the most effective teachers is a necessary step in raising the achievement of American students. But attracting highly-effective teachers is an increasing challenge as today’s teachers are asked to do more than ever before and because the most salient form of teacher pay—salaries—has been in relative decline.

The State of U.S. Education

A strong educational system and the role of teachers have never been more important for America’s workforce.  Less-skilled workers are disproportionately unemployed and have experienced declining wages, and the return to a college degree has never been higher.1  Unfortunately, the United States is in a period of stagnating educational achievement. Despite a doubling of per-pupil expenditures and decades of education reform in the United States, student achievement has only inched forward. Test scores, as measured by the National Assessment of Educational Progress (NAEP), have barely budged in 35 years, and the United States ranks low relative to other developed countries on measures of achievement. For example, on the Program for International Student Assessment (PISA), which compares students across 34 countries, American 15 year-olds ranked a disappointing 25th in math, 17th in science, and 14th in reading.2  These challenges contribute to low high school and college completion rates for American students. Since the 1970s, college completion rates for many groups have increased slowly or not at all and, if those with GED qualifications are excluded, the proportion of the population finishing high school has actually fallen. At the same time, the value of education in the labor market is at an all time high. Relative to someone with a high school diploma, for example, those with a college degree earn twice as much each year—equivalent to about $570,000 more over a worker’s lifetime.

The Importance of Effective Teaching

Almost everyone, from policymakers to parents to teachers, agrees that reforms in the K-12 educational system are necessary to developing a more educated workforce and a stronger economy. In the last 15 years, advances in data availability and computing power have unleashed an explosion of research that begins to identify what works and what doesn’t in education policy—all of which can help guide policymakers achieve better bang for the buck with education spending. For example, strong evidence supports the effectiveness of a subset of charter schools and expanding access to early childhood education. While there are certainly a variety of factors that affect student outcomes, including home environment and socioeconomic factors, this evidence suggests that there are many avenues to improving achievement through changes in the classroom.

In terms of delivering large potential gains, effective teaching is among the most important influences on student achievement. Research finds that teachers vary substantially in their effectiveness, even within the same school. These differences arise not just in the effect of teachers on test scores, but also in terms of their impact on the lives of children long after they leave the classroom—including impacts on their future employment prospects and earnings.

A primary challenge to improving teaching quality is continuing to recruit and retain the best and the brightest in our workforce to become teachers. While no one pursues a teaching career solely for the financial rewards, compensation does matter for attracting and keeping teachers with outside options and who must support their own families. Continuing to attract a broad pool of applicants has become harder over time in part because teaching salaries—the most visible form of compensation for new teachers—have declined relative to salaries in other professions.

The Relative Decline in Teacher Wages

The graph below shows that full-time teaching salaries have remained flat over time while the wages of comparable workers have increased substantially. After taking account of the experience, education, and other characteristics of workers, the pay gap between teachers and non-teachers has expanded. In the 1970s teachers made about 7 percent less than non-teachers, after controlling for education and other characteristics or about $3,800 per year. Over the last decade, that gap has increased so that teachers earn about 19 percent less than non-teachers—a difference of almost $11,000 a year. 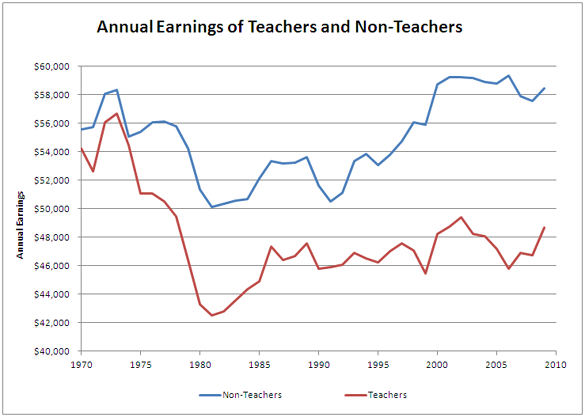 Furthermore, compared to other countries, the relative salaries of American teacher appear low. In a recently released report, the OECD calculated the ratio of the average salaries of teachers with 15 years’ experience to the average earnings of full-time workers with a college degree and found the United States ranked 22nd out of 27 countries.

Of course, in addition to salaries, public school teachers generally receive more favorable health and retirement benefits than many private-sector workers, though detailed data are hard to come by. Even though non-wage benefits have historically been more generous for teachers, it is not clear that these benefits have increased by enough to offset the relative decline in wages demonstrated above.

But the relevant question is whether the combination of relatively low salaries and relatively high deferred benefits is the right formula to attract and retain talented young people with many alternative career opportunities other than teaching. Given the evidence that great teachers have profound effects on the life-time outcomes of their students, it is important that compensation policies are designed to attract high-quality applicants and retain many of the outstanding teachers currently in the profession.

Over the last 30 years, educational attainment and achievement have stagnated and, in the face of an increasingly competitive global economy, have contributed to a decline in the earnings of many Americans. The question is not whether additional reforms to our educational system are needed, but which reforms provide the most cost-effective ways of improving student achievement.

In a forthcoming Hamilton Project strategy paper (for release on September 27th), we provide a dual-track approach to improving student performance:

2.The second approach focuses on smaller, cost-effective reforms that could be implemented without dramatically re-thinking how schools operate, such as student incentives, early childhood education, and managerial and organizational changes at the school and district levels.

The Great Recession has highlighted the importance of a strong education and yet many of our children are not graduating with the skills necessary to successfully compete in today’s global marketplace.  To help address these issues, The Hamilton Project will release three new policy proposals and host a forum, “Promoting K-12 Education to Advance Student Achievement,” on September 27th in Washington, DC.  In addition to broader discussions on the educational system, the event will highlight new proposals on the use of incentives in education; a new approach to accountability for teachers and students; and opportunities for organizational changes to improve student performance.

Education has traditionally been a key component of the American Dream­­­­—that each generation can do better than the last.  A hallmark of that success has been the ability of any American family to give their child a high-quality education in public schools.  In order to maintain this foundation, new policies and new ways of thinking will be necessary to ensure that America’s educational system is prepared for the demands, now and in the future, of an increasingly competitive world economy.

Student loan forgiveness is regressive whether measured by income, education, or wealth