The labor market news this month has been impressive, with above-expected job creation numbers, a continued dip in the unemployment rate, and falling jobless claims all giving reason for optimism about the state of the economic recovery. However, the encouraging top-line figures mask persistent fragility in the labor market. Notably, long-term unemployment remains stubbornly high, particularly for young workers. Early jobs are critical for establishing future earnings and employment trajectories, thus the health of the labor market for younger workers may serve as a harbinger for the economy’s longer-term vibrancy. Young jobseekers continue to face historically poor employment prospects, and the employment picture for these workers has not improved at the same pace as other age groups.  While the conversation in Washington has focused on budget politics, policymakers who lose sight of the challenges facing young workers do so at great risk to the future health of the American economy. In addition to safeguarding basic protections for the long-term unemployed, Congress can help jobless younger workers by protecting and expanding AmeriCorps.

Long-term unemployment for young workers during the Great Recession spiked to historic levels, and remains at record-high rates even during today’s increasingly robust recovery.[i]  Typically, long-term unemployment (defined as workers looking for a job for between six months and one year), has returned to pre-recession levels by this point in an economic recovery. Yet in February, 44 months into the current recovery, persistent unemployment amongst 20 to 24 year old jobseekers was 237% of historic rates. 646,000 young workers were out of work for six months or more. 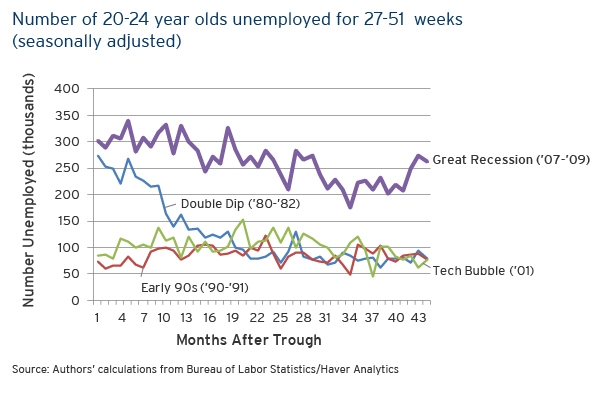 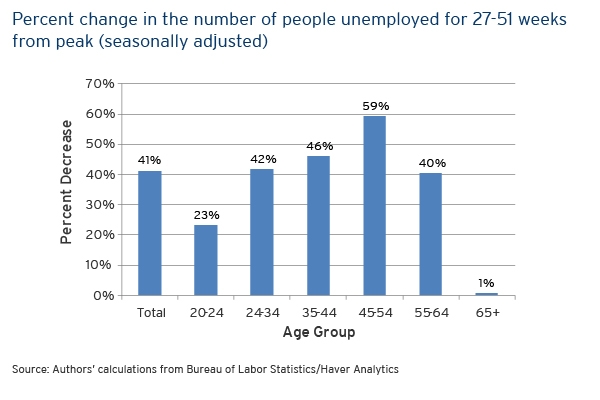 Senior fellow - Center on Labor, Human Services, and Population at the Urban Institute

Long-term unemployment for young job seekers has long-lasting impacts.  Unemployment today predicts unemployment tomorrow, in addition to enduring impacts on earnings, particularly for those with long durations of joblessness.[iii] Recent research finds that unemployed young workers experience persistent effects on employment prospects for at least a decade, and highlights the long-term negative impact on earnings and employment prospects for college students who graduate during a recession.[iv] Long durations of unemployment for youth are likely to exacerbate these negative effects. For instance, workers in the early stages of their careers develop social networks that allow for upward career mobility, via internal promotion or external transition to a better position. Young workers also learn more about the labor market while on the job, discovering their strengths and weaknesses, as well as their personal preferences regarding industry and occupation. As a result, workers’ early jobs may be particularly important for establishing “job fit.” Prolonged joblessness at the beginning of a worker’s career may be particularly deleterious due to its negative impact on this iterative process. Effective and efficient matching of workers to jobs is a key element for a productive workforce for the future, thus prolonged joblessness for youth should be of particular concern to those worried about the country’s long-term economic growth.

Protecting basic unemployment benefits, including the federal long-term unemployment benefits program, is a key first step that will not only benefit young jobseekers, but also the many older workers who continue to face challenges in the labor market. However, youth unemployment can be tackled through other avenues as well. Policymakers should address long-term unemployment among young people through an expansion of the AmeriCorps program – or, at a bare minimum, by protecting this program from cuts.  AmeriCorps hires recent college graduates and others to address the critical needs in American communities. Corps members receive valuable labor skills.  A study from the University of Texas found that participants in AmeriCorps were more likely to report they had basic work skills than their peers.[v]  Furthermore, the program provides much needed support to communities still recovering from the Great Recession. For example, AmericCorps-funded CityYear corps members serve as tutors, mentors, and after-school programming staff for elementary school students in cash-strapped public schools in Detroit, where public funding has been slashed due to the deep impacts of the recession and slow recovery.

The budget sequester is slated to cut several thousand positions from AmeriCorps in the coming months.[vi]  Prior to the sequester, AmeriCorps’ budget had already been trimmed by eight percent in the wake of the recession.[vii] Recent Republican budget proposals have zeroed out funding for the volunteer program.  AmeriCorps is a relatively inexpensive federal program, costing about one billion dollars a year (compared to, for instance, $718 billion in annual defense spending), and yielding meaningful impacts for both its participants and the communities that it serves.  Instead of slashing the program, Congress should signal a renewed commitment to America’s young workers and economically-devastated communities through a renewed and reinvigorated investment in AmeriCorps.

[i] Unless otherwise noted, long-term unemployment is defined as jobseekers who have been looking for work for 6 to 12 months. Young worker are defined as those ages 20-24.

[ii] It is worth noting that the decline in long-term unemployment for youth out of work for a year or more has been relatively commensurate with the drop in this rate for other age groups. This may be because young workers are dropping out of the labor market after a year of joblessness, or because younger workers are likely to take dead-end jobs rather than continuing to search for a job well-suited to their skill set. In either case, the more impressive decline in rates of long-term unemployment for 20-24 year olds out of work for a year or more is not necessarily a positive story about the labor market for these young workers. Another possible reason is the wording of the BLS survey.  It is possible that young people who had fulltime unpaid internships would answer the questions as if they were not seeking gainful employment.

[vii] Ibid. A portion of this budget cut was due to the expiration of stimulus funding.

Eli Byerly-Duke and Alan Berube
Thursday, May 13, 2021
Get daily updates from Brookings