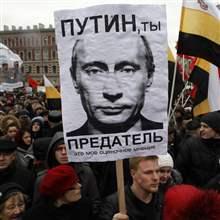 In this new podcast, Clifford Gaddy from the Center on the United States and Europe, and Carol Graham, author of The Pursuit of Happiness: An Economy of Wellbeing, discuss how expanding economies in emerging democracies such as Turkey and Russia create more prosperity, but could still create conditions ripe for protest.

A previous podcast featured Fiona Hill and Kemal Kirisci from the Center on the United States and Europe explore similarities and differences between protests in Russia and Turkey and the emerging role of new media.

In a broad discussion that inspired these podcasts, several Brookings scholars examine the similarities and differences between the protests in Russia and Turkey and the ways that their respective leaders have reacted to them. Read excerpts from the discussion and get the transcript.

Clifford Gaddy explores the Russian middle class and its aspirations.

Carol Graham explains the characteristics of protestors in Russia, Turkey and other emerging democracies.

cgbrookings
Get daily updates from Brookings