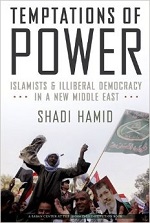 After a dizzying rise to power in Egypt’s parliament and presidency in 2012, the Muslim Brotherhood faced mass discontent, was ousted by the military, declared a terrorist organization and its followers were arrested and hounded into exile. Egypt is the most extreme case – but from Morocco to Jordan, and nearly everywhere in between, once-ascendant Islamists find themselves facing unprecedented challenges.

In his new book, Temptations of Power: Islamists & Illiberal Democracy in a New Middle East (Oxford University Press), Brookings Institution Fellow Shadi Hamid steps back from the headlines to examine how and why Islamist movements change over time, what animates their worldview and what are their ultimate objectives for society. Hamid conducted hundreds of interviews with Islamist leaders and activists across the region to develop a bold thesis: that repression compelled Islamists to moderate their politics, work in coalitions, and de-emphasize Islamic law. Ironically, then, democratic openings have tended to push Islamists toward their original conservatism, oftentimes leading them to overreach and confrontation.

On April 9, the Project on U.S. Relations with the Islamic World launched Hamid’s new book with a discussion of the past and future of political Islam. CBS News Correspondent Margaret Brennan moderated the discussion, after which Hamid took audience questions.