On November 14, 2012, the Brookings Doha Center (BDC) hosted a policy discussion on the drafting of the new Egyptian constitution. Speakers discussed the challenges facing Egypt’s Constituent Assembly and the possibility of producing a new constitution before the current deadline of December 12, 2012. The panel featured Amr Darrag, Secretary-General of the Egyptian Constituent Assembly and head of the Freedom and Justice Party’s Foreign Relations Committee, Ambassador Hesham Youssef, Assistant Secretary-General of the Arab League and formerly head of Amr Moussa’s 2012 presidential campaign, and Hossam Bahgat, executive director of the Egyptian Initiative for Personal Rights. The discussion was moderated by BDC Director Salman Shaikh and attended by members of Qatar’s diplomatic, academic, business, and media communities. 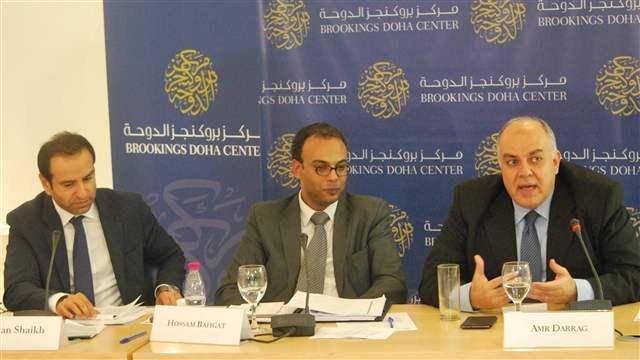 Amr Darrag began by joking that he had been hoping for a break from speaking about Egypt’s constitution after six months of discussing it with the Constituent Assembly, on television, and even with his family. Acquiescing to what he called his “fate,” though, he chose to focus on the positives of the constitutional drafting process. Public tensions aside, Darrag said that the constitution was the “fruit of [Egypt’s] revolution” and that for the first time Egyptians felt they had a role in shaping their country. He said that he made a point of sending thanks to anyone who submitted an idea or suggestion to the process and shared the story of a man who, when he was thanked, burst into tears – he said that it was the first time in his life that he had submitted something to an Egyptian government body and felt that it was taken seriously.


Darrag acknowledged that the process of issuing new and amended drafts of the constitution could sometimes be confusing, but said that this was “natural” when trying to maintain an open, transparent process. He minimized the issue of the Assembly’s makeup, saying that it was something that they had “gotten past.” Darrag personally objected to the classification of the body’s members as “Islamist” or “civil,” saying that, like most Egyptians, he considered himself liberal and sympathetic to social justice, not just “Islamist.” He also objected to the same sort of lens being applied to the constitution itself. He questioned why Islam was reduced to the constitution’s Article 2 and a few other articles – as if Islam had nothing to say about human rights and anti-corruption.


Darrag said that there was a diversity of opinion within the Assembly, but that it did not represent fundamental divisions over content. Instead, he said, public disputes among Assembly members essentially amounted to political and electoral gamesmanship. Members (Islamist and non-Islamist alike) would agree on a given article inside the Assembly, then go to the media claiming that the same article will be a “disaster” or that it will “bring Egypt back to the Dark Ages.” He emphasized that, in the end, Assembly members were public servants – they were volunteers who had taken on their responsibility for the sake of their country. Although there were disagreements on “details,” difference on the “pillars” of the constitution was minimal. Listing key areas of consensus, Darrag said that all Egyptians (again, Islamist and non-Islamist) agree on the principles of sharia as a basis for legislation; they agree on guaranteeing individual freedoms to the maximum extent possible, even if they might disagree on some details; and they agree on a division of powers between the branches of government.


Darrag set out his goal as arriving at the best constitution possible and the maximum amount of consensus, even if nobody would be 100 percent satisfied with the result. The Assembly had put in place a mechanism to amend the constitution at a later date, and possible five- or ten-year restrictions on amendments had been struck. For the sake of political and economic stability, he said, Egypt must move forward. 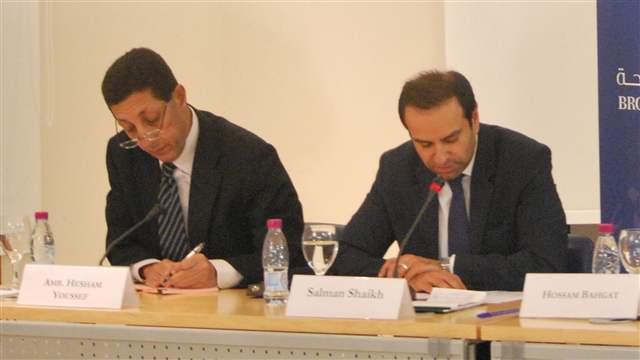 For his part, Ambassador Hesham Youssef lamented the atmosphere of “deep polarization” surrounding the drafting process. He emphasized that the approach to writing the constitution should have been different from the start: it should have been one of reconciliation, not confrontation; inclusion, not the exclusion of a dissenting minority; and consensus, instead of what now seems close to an imposition. Without naming specific factions, Youssef complained of groups who were intent on passing the constitution “by hook or by crook,” believing that their majority allowed them to move in their preferred direction. Outlining the key issues that he felt the constitution must address – including defining a national identity, laying out the people’s rights and freedoms, and establishing a division of powers that included checks and balances – Youssef contended that this constitution had fallen short on all of these points.


Youssef complained of a few damaging perceptions of the drafting process, many of which he endorsed. First, that the constitution has been written in the context of a sort of battle between those who support sharia and those who oppose it; this perception, Youssef said, was “not true.” Second, that time will not be enough. Youssef said that the constitution is not a law that can be changed by parliament; rather, it requires a lengthy and complicated process characterized by precision, clarity, and consistency. He said that there will not be enough time to discuss the document in the Constituent Assembly himself, much less have a society-wide debate, and that even some close to the Muslim Brotherhood believe the constitution will be “half-baked.” Third, that a sense of confusion has prevailed throughout the process. While he agreed with Darrag on the transparency of the process, he said that the poor flow of information had led to a situation in which Egyptians heatedly debated certain articles, only to discover that they were already struck from a later draft. Perhaps most damagingly, Youssef said that many are of the opinion that the constitution in its current form does not reflect the spirit of the revolution. He would have preferred a constitution of which Egyptians could have been proud all over the world, not the bare minimum of what can be achieved today.


Youssef also resisted Darrag’s contention that real disagreements were minor, pointing to fundamental differences on the role of sharia, freedom to worship, the rights of women, and questions related to the balance of powers. He also pointed to serious objections from parties including Egypt’s judges, women’s groups, military, liberals, and even the country’s Writers’ Syndicate. He said that a novel oversight role for the religious scholars of al-Azhar University and a role for the military that barely differed from the November 2011 “Selmi Document” were among issues that aroused concern and had to be changed.


Hossam Bahgat sharply objected to Darrag’s description of the constitution and the approach of treating the constitution as a “bitter pill” to be swallowed in the name of stability. He emphasized that constitution is, in fact, a crucial step in Egypt’s democratic transition and that the drafting process will define the legacy of President Muhammad Morsi. As such, Bahgat said, the process should be given as much time as it requires. Though he expressed disappointment that the drafting had not been an opportunity for national debate and healing, he said that he is pleased to see the FJP and President Morsi at least recognize that the constitutional deadlock represents an escalating crisis. Those who had met with Morsi, however, had all left saying that the president’s priority was stability, and Bahgat said that the meetings had not yet produced a way out of the crisis.


Bahgat decried the drafting process as “severely mismanaged.” He described the Constituent Assembly itself as a “bundle of birth defects.” He traced the process of forming the Assembly first through the Egyptian parliament’s failure to establish objective criteria for participants in the body’s first iteration, then through the “sad turning point” of the Supreme Council of the Armed Forces-brokered 50-50 split between Islamists and non-Islamists. That moment, Bahgat said, was when the process “broke beyond repair,” as the FJP and the Nour Party took 50 seats and left the remaining 50 to be divided among al-Azhar, the Coptic Church, representatives of state institutions, and others. Bahgat complained that the resulting body was neither an expert body nor a nationally representative one. Moreover, it was similarly stacked with parliamentarians, and thus vulnerable to the same challenges to its legality. After its formation, the second Assembly then used its first meetings to establish undemocratic rules of procedure, choosing a 57 percent threshold for agreement only because the majority knew it had 57 ready votes. Bahgat relayed the complaints of Assembly members about a lack of transparency even within the Assembly itself (including drafts that would change inexplicably after leaving committees), as well as his own disappointing experience submitting his organization’s suggestions.


Bahgat summed up his take on the constitution’s latest draft by saying that if deposed President Hosni Mubarak had agreed to reform the Egyptian system slightly, this is the sort of system he would have produced. The draft has improved on the 1971 constitution in some respects, but in others it goes backwards and is “pre-revolutionary.” Bahgat painted several different scenarios (all negative) for how the drafting process might go forward, but said that, in sum, he does not think this constitution can result in long-term stability. Noting the procedural hurdles that make it almost impossible to amend the constitution, Bahgat ended on a deeply pessimistic note.


Following presentations from each of the panelists the floor was opened to questions. Youssef, when asked about the specific articles to which he objected, provided several examples from what he said were 15 to 20 problematic articles. He emphasized that while 100 percent agreement would be impossible, the real goal of the process was the “maximum amount of consensus.” He said that the most recent draft was “not a disaster,” but pointed to the need for more work towards agreement.


When Bahgat was asked about his objection to parliamentarians’ participation in the Assembly; he said that he had no objection to that per se, but rather to the failure to set any objective criteria for nomination to the body. He went on to discuss how the Assembly’s formation opened it to legal challenge and how the process had been “hijacked” by senior legal experts and judges, preventing Egypt from benefiting from more modern constitutional thinking. Darrag, in turn, responded to criticisms of the Assembly’s makeup, saying that the nomination process was judged to be better than more democratic elections – after all, elections would likely have produced a body just as Islamist-heavy as the country’s new parliament.