The authors—Will Dobbie and Crystal Yang of Harvard University—note that more than 10 million people are arrested each year in the United States and that, at any point in time, roughly half a million are in pre-trial detention. They cite “the all-too-common stories of arrested individuals who, despite being first-time offenders accused of low-level crimes, spent months in pretrial detention and faced subsequent long-term damage in the form of family separation, work interruption, and loss of housing, or even death.”

“Many of these harms can result even when the period of incarceration is brief and even if individuals are not ultimately convicted of any crime,” they write in The economic costs of pretrial detention.

To assess the effects of pre-trial detention on individuals, particularly younger people, Dobbie and Yang looked at employment and income of people arrested in Miami and Philadelphia from 2007 to 2014. Reviewing evidence in previous research, they note that pretrial detention decreases the probability of employment three to four years after the bail hearing by 9.4 percentage points. And, under a series of assumptions, they estimate that defendants detained pre-trial lost $29,001 in income on average over a lifetime compared with defendants who weren’t detained pre-trial. 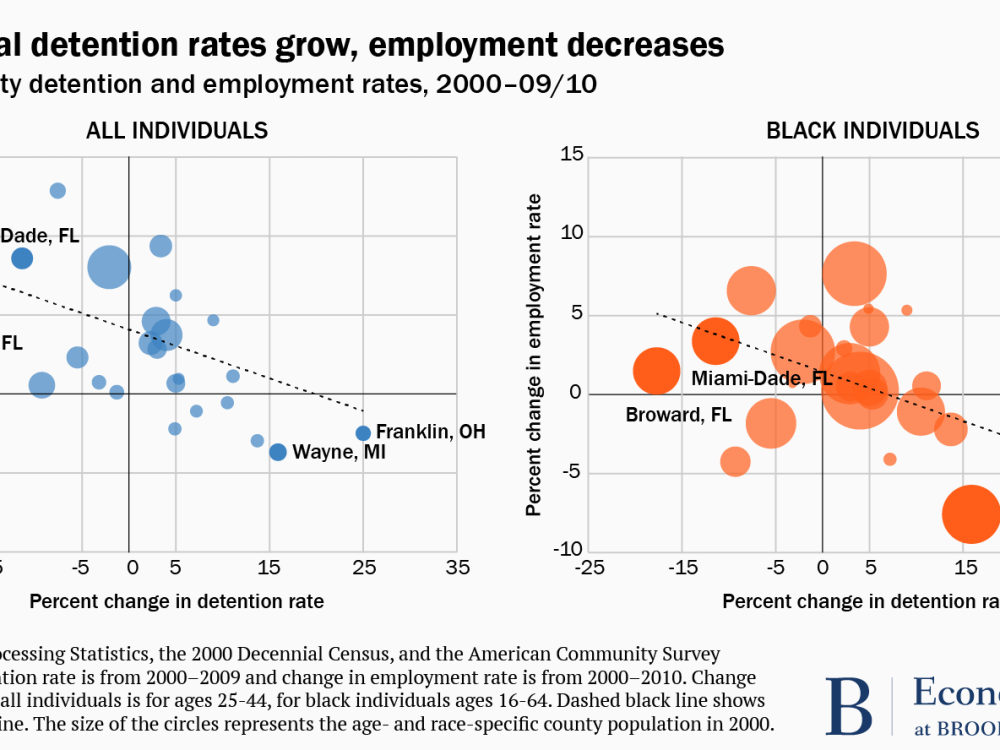 Reducing pre-trial detention from 38 percent (the figure for felony defendants in 2009) to 10 percent—through reforms such as the elimination of cash bail—would produce substantial economic benefits, they argue. If money bail were eliminated, they estimate that up to 2.8 million fewer people would be detained per year. (Some defendants would continue to be detained on the grounds that they are dangerous.) And, they estimate that eliminating money bail could increase aggregate U.S. income by up to $80.9 billion per year.

“If you want to improve economic outcomes … you don’t want to just look at changing labor-market policies, you also want to think about reforms to criminal-justice policies,” Yang said in an interview with Brookings. “We think focusing on the pre-trial system is a good place to start.”

The views expressed by the authors, discussants and conference participants in BPEA are strictly those of the authors, discussants and conference participants, and not of the Brookings Institution. As an independent think tank, the Brookings Institution does not take institutional positions on any issue. Please contact Haowen Chen (hnchen@brookings.edu) if you have any questions.

Advanced cognitive skill deserts in the United States: Their likely causes and implications

Supporting workers and families in the pandemic recession: Results in 2020 and suggestions for 2021