Since 2003, the President’s Emergency Plan for AIDS Relief (PEPFAR) has provided billions of US tax dollars to expand HIV treatment, care, and prevention programs, mostly in sub-Saharan Africa. According to the Institute of Medicine, PEPFAR’s $54 billion authorization from 2003-2013 constitutes the “largest global health initiative focused on a single disease ever undertaken.” PEPFAR has generated significant health gains, sharply reducing HIV-related and all-cause mortality.

Even though PEPFAR’s dramatic health benefits are well documented, much less is known about its economic impact. Filling this evidence gap is important for US policymakers because 1) when Congress reauthorized PEPFAR it required the program to transition away from emergency assistance and strengthen the capacity of partner nations to provide treatment themselves, 2) Africa represents a small, but growing US export market, and, 3) amid US budget austerity, understanding the overall impact of PEPFAR allows efficient allocation of scarce aid resources.

The potential impact of HIV treatment on economic outcomes is in fact ambiguous. On one hand, treating HIV-positive individuals could increase productivity and reduce care-giving burdens. In addition, formerly sick patients could return to work, leading to better futures for their children. Moreover, HIV treatment substantially reduces the likelihood of disease transmission. Finally, greater life expectancy raises incentives for education and savings, since individuals live long enough to reap their benefits. On the other hand, by allowing formerly sick HIV patients to work, PEPFAR could lead to flooded labor markets, driving down wages, and increasing unemployment. Moreover, if HIV treatment saves lives, but some former patients cannot go back to work, PEPFAR could increase the dependency ratio, while mechanically decreasing per capita GDP.

To investigate the economic impact of PEPFAR, we compare employment trends between ten countries that received a large amount of PEPFAR funding (focus countries) against trends in eleven countries that received little or no funding (control countries), all in sub-Saharan Africa. We found that PEPFAR was associated with a 13 percent increase in employment among males in focus nations compared to non-focus ones (Figure 1).  In contrast, no change in employment was observed among females. In addition, we found that increasing PEPFAR per capita funding by $100 was associated with a 9.1-percentage-point average increase in employment among males. 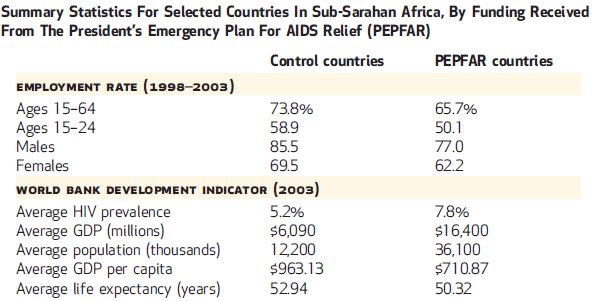 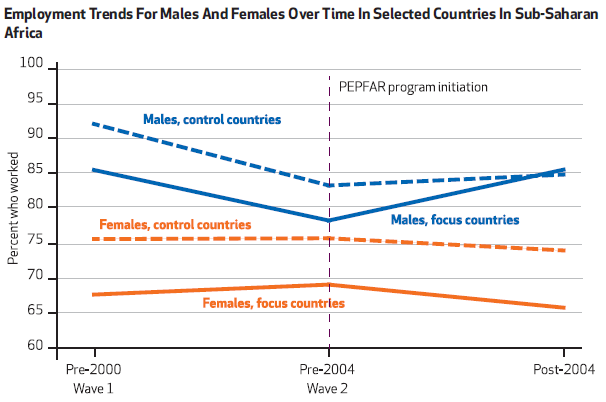 Finally, we investigate whether our results can be explained by changes in employment solely among the HIV-positive population or whether they imply spillovers to the HIV-negative as well. Given HIV prevalence and other studies on the likelihood of returning to work after treatment, we suggest the employment increase found was partly driven by economic stimulus that benefits the HIV negative too.

This paper fits into an emerging literature on the economic impact of HIV treatment. Other studies show that treating the HIV positive led to nearly full employment recovery in South Africa, reduced acute and chronic malnutrition among Zambian children with an infected adult in the household, and expanded population-level employment for males also in South Africa. These findings imply that focusing exclusively on health effects underestimates the overall benefit of these programs and that economic impact should be incorporated into our development aid decisions. Indeed, health improvements constituted 24% of “full income” growth1 between 2000 and 2011 in low- and middle-income nations. Given that international support for health is stagnant amid budget austerity, these findings show that efforts initially conceived as humanitarian can also bolster our policy arsenal to fight global poverty.