The latest data from the National Science Foundation’s Survey of Earned Doctorates for the 1216 PhDs in economics awarded in 2020 find that men outnumbered women by nearly 2-to-1, 60% of the doctorates went to foreigners with temporary visas, and 24 of the 493 recipients (about 5%) who were U.S. citizens or permanent residents were Black.

A few gleanings from the data:

Data on the race/ethnicity of PhDs are available only for those who are U.S. citizens or permanent residents. Here’s the breakdown for 2020 and 2019: 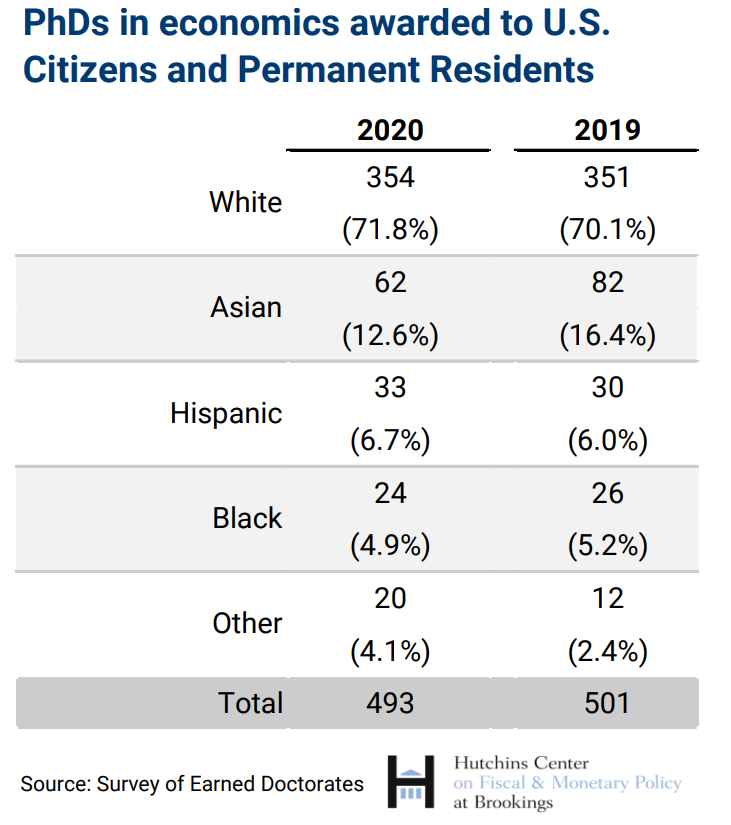 The number of PhDs awarded to Black U.S. citizens or permanent residents has risen slightly in the past few years, from an average of 16 in 2013 through 2017 to an average of 25 in the following three years.

To read the Hutchins Center report on gender and racial diversity among PhD economists employed by the federal government in 2020, visit this page.

The data in this post are from the Restricted-Use Data Analysis System of the Survey of Earned Doctorates, a survey of 55,000 individuals who earned doctorates in the prior year. The Hutchins Center report uses data from the American Economic Association’s Committee on the Status of Minority Groups in the Economics Profession, which are drawn from the Integrated Postsecondary Education Data System, and differ slightly from the data in the Survey of Earned Doctorates.

Why information alone is not enough to improve higher education outcomes