In 2021, The Hamilton Project conducted original research and commissioned policy proposals from leading economic thinkers as part of its core mission of promoting opportunity, prosperity, and inclusive economic growth. Given the urgency around responding to the COVID-19 recession and the need to understand in real-time how conditions are changing, The Hamilton Project focused on providing evidence and proposals to support the economic recovery. In this review, we highlight some of the key figures The Hamilton Project produced over the past year. These figures and the linked related work tell the story of an irregular, uneven economic recovery and policy proposals aimed at a strong, equitable recovery.

January: Without a fiscal package, real GDP would remain below pre-pandemic level for the next several years.

The Hamilton Project, in partnership with The Hutchins Center for Fiscal and Monetary Policy, began the year as policymakers did: assessing the potential impacts of what would become the American Rescue Plan. This blog provides analysis of the Biden Administration’s proposed $1.9 trillion fiscal package and estimated that the proposed package would lead to sharply rising real GDP. 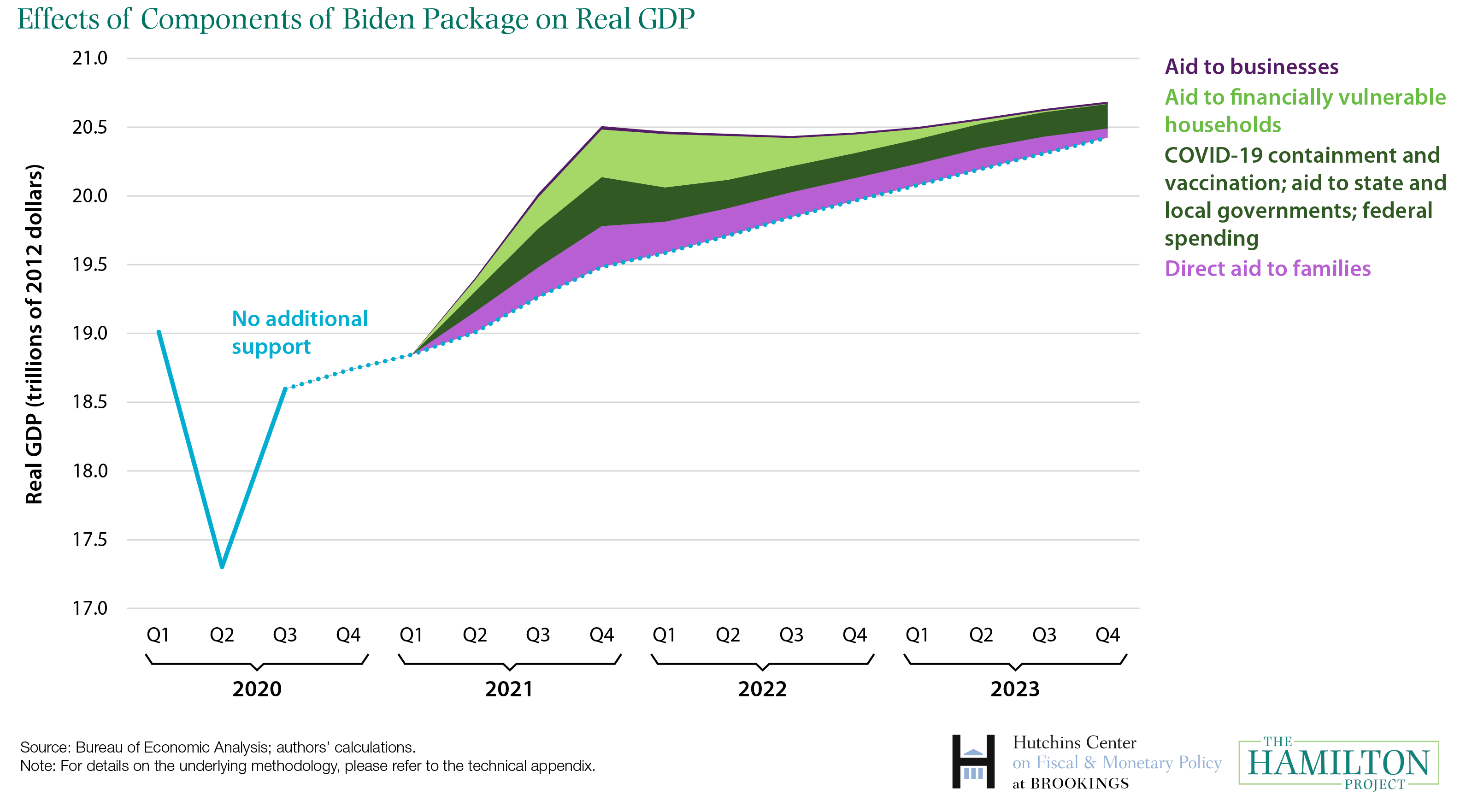 February: Declines in the leisure and hospitality industry have hit women and people of color hard.

In a February 2021 blog, The Hamilton Project, in partnership with the Markle Foundation, examines the labor market implications of the pandemic, focusing on how the pandemic caused workers to switch industries to find jobs. The disproportionate effects on certain demographic groups are largely owed to those groups being disproportionately employed in particularly hard-hit industries; notably, the leisure and hospitality industry experienced significant job loss with nearly 4 million fewer jobs in December compared to February. Workers initially in that industry switched into other industries at particularly high rates. 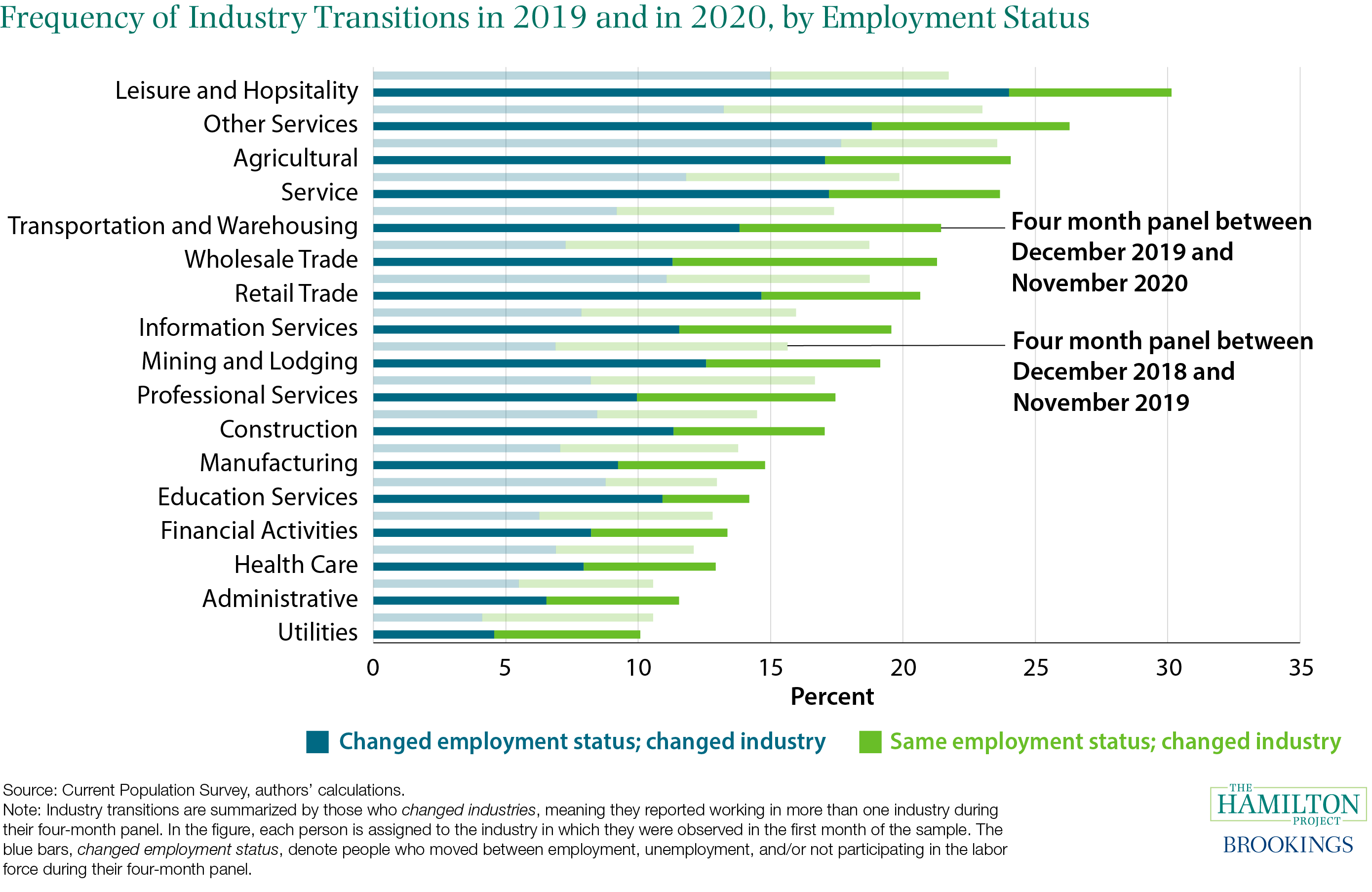 In addition to this blog post, The Hamilton Project released the related policy proposal “After COVID-19: Building a More Coherent and Effective Workforce Development System in the United States” by Harry Holzer. Several other blogs looking at labor market recovery were published at various points in the year; including “Examining the uneven and hard-to-predict labor market recovery” authored by Lauren Bauer, Arindrajit Dube, Wendy Edelberg, and Aaron Sojourner and “A hot labor market won’t eliminate racial and ethnic unemployment gaps” by Stephanie Aaronson, Mitchell Barnes, and Wendy Edelberg.

March: More than one in ten mothers of young children left their jobs due to child-care responsibilities at some point in 2020.

During the COVID-19 pandemic, mothers were shouldered with increased caregiving responsibilities and faced competing demands for their time. The figure below from a Hamilton Project economic facts piece, shows that surveyed mothers reported their households making substantial changes to accommodate their families’ needs. More than sixteen percent of mothers with young children reported a household member leaving their job at some point in 2020 due to childcare responsibilities; within this group, 70 percent were the mothers themselves. 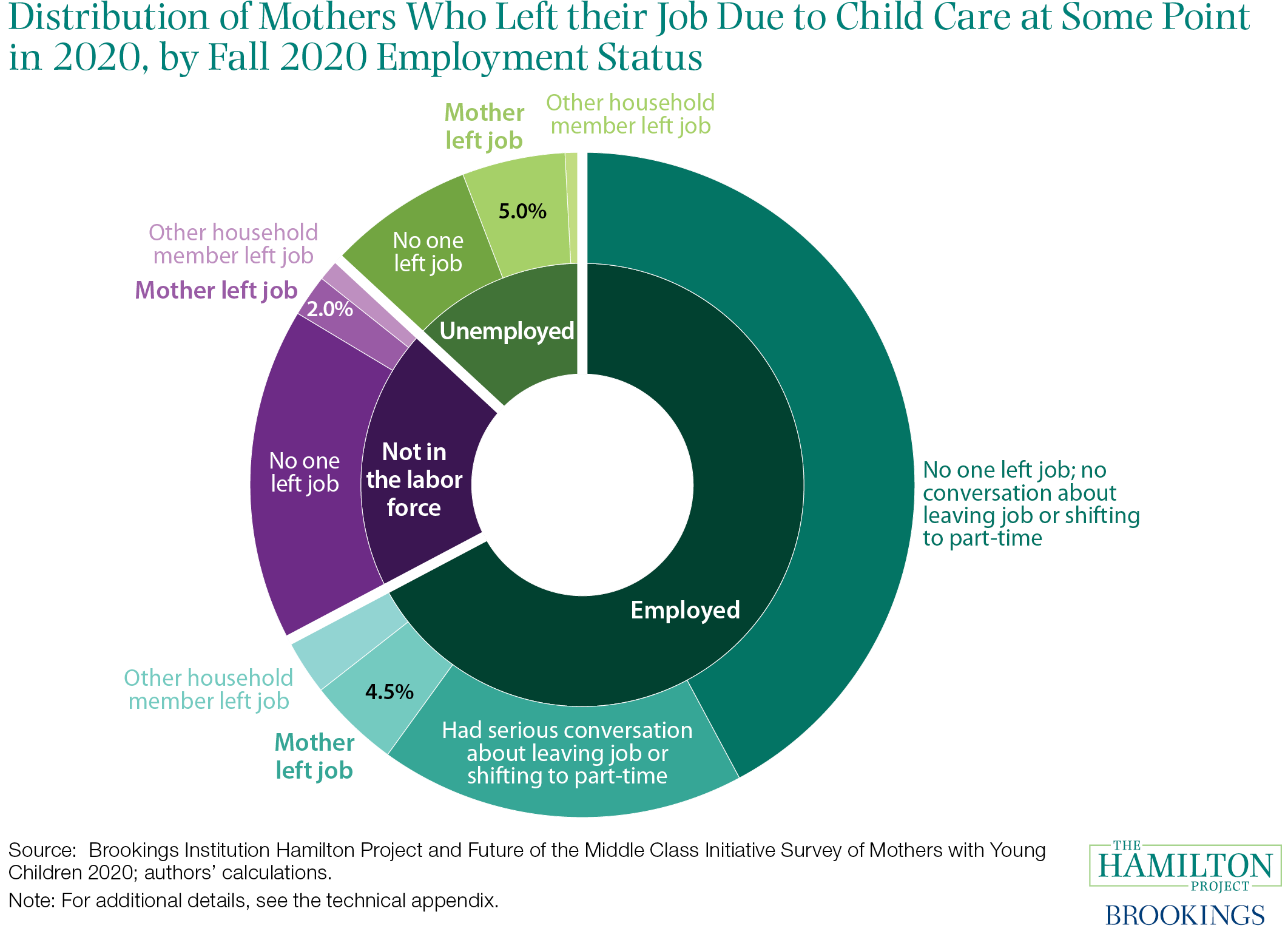 In addition to this Facts piece, “Mothers are Being Left Behind in the Economic Recovery from COVID-19” by Lauren Bauer and “Time Waited for No Mom in 2020” by Lauren Bauer, Sara Estep, and Winnie Yee are other pieces The Hamilton Project has published on how mothers have been affected by the COVID-19 pandemic.

In its April 2021 economic analysis, The Hamilton Project provides an overview on the state of housing trends and policies from decades prior to the present. Households in the lowest income quartile have seen a consistent rise in rent as a share of household expenditures while homeowners across income groups have been experiencing declines in the percentage of their household income spent on mortgage interest. 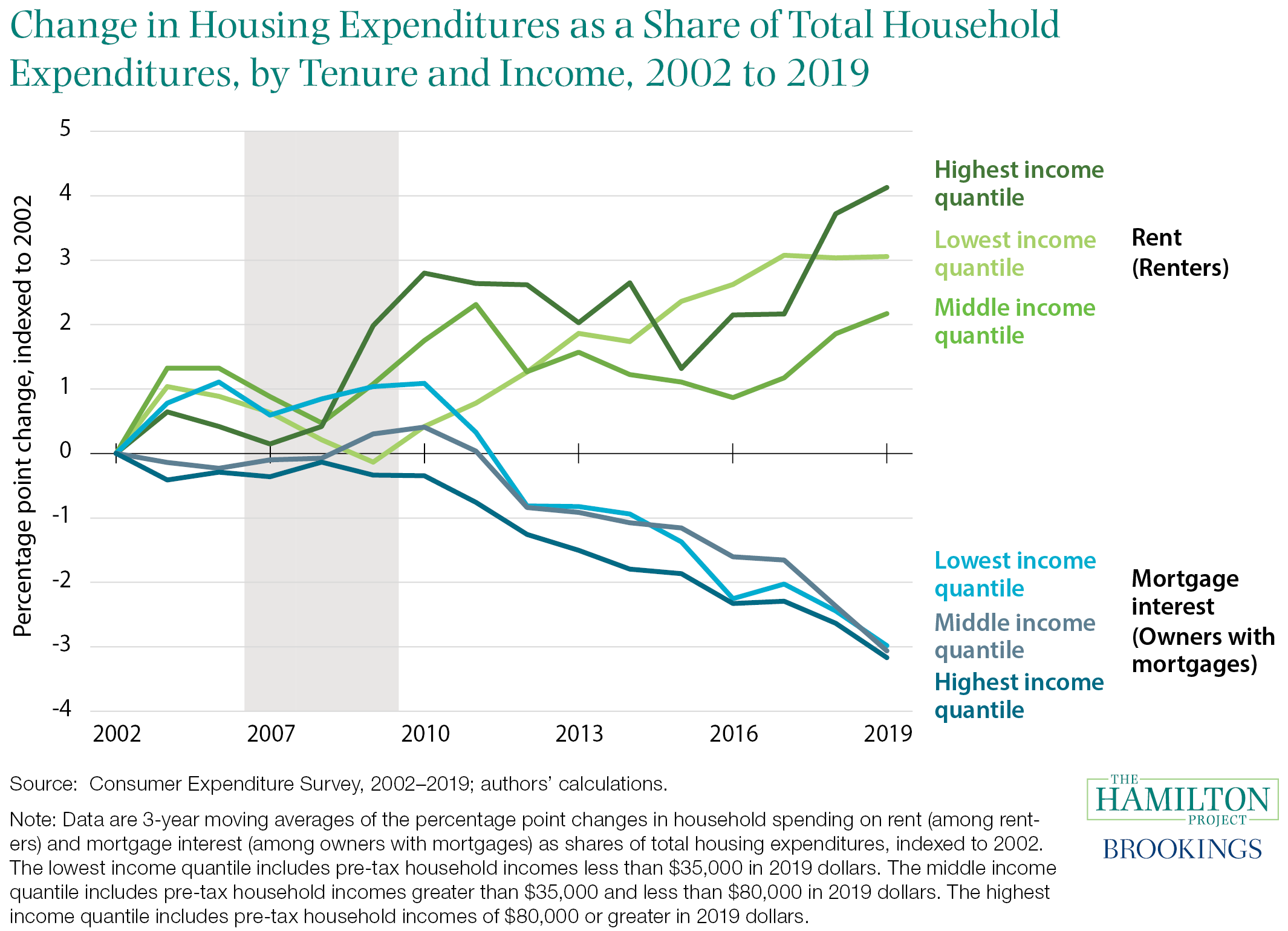 May: Low-wage workers and those in smaller firms have the least access to paid leave from work.

Policies for protection and wage replacement have long existed, but the questions of who and how one can be eligible for such protections highly varies: only 20 percent of workers at private firms have access to benefits specifically designated as paid family leave. For The Hamilton Project, Tanya Byker and Elena Patel published a proposal for a federal paid parental and medical leave program designed to reach more Americans. 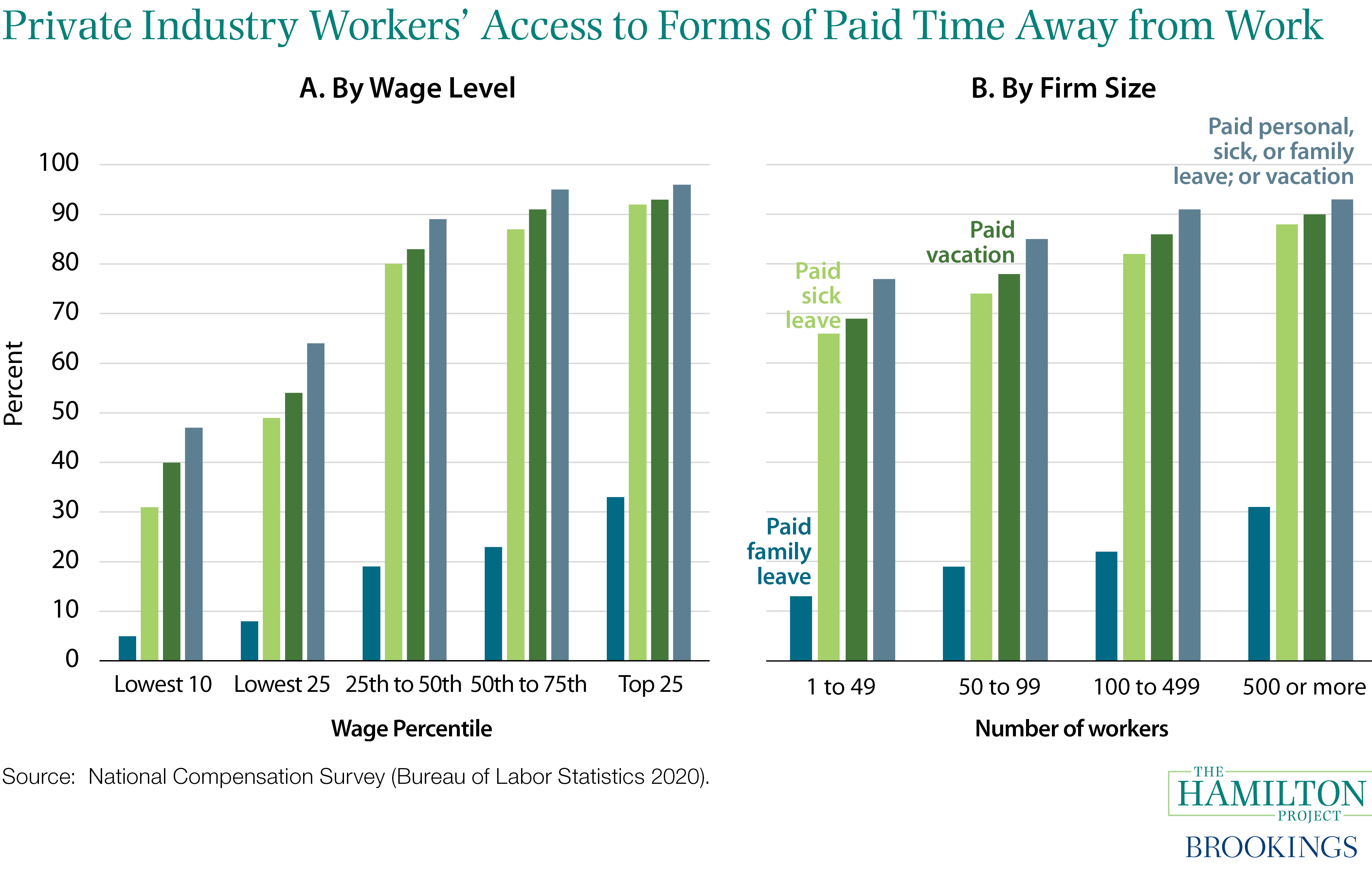 June: In FY2019, the federal government spent about 13 percent of GDP on social insurance programs. 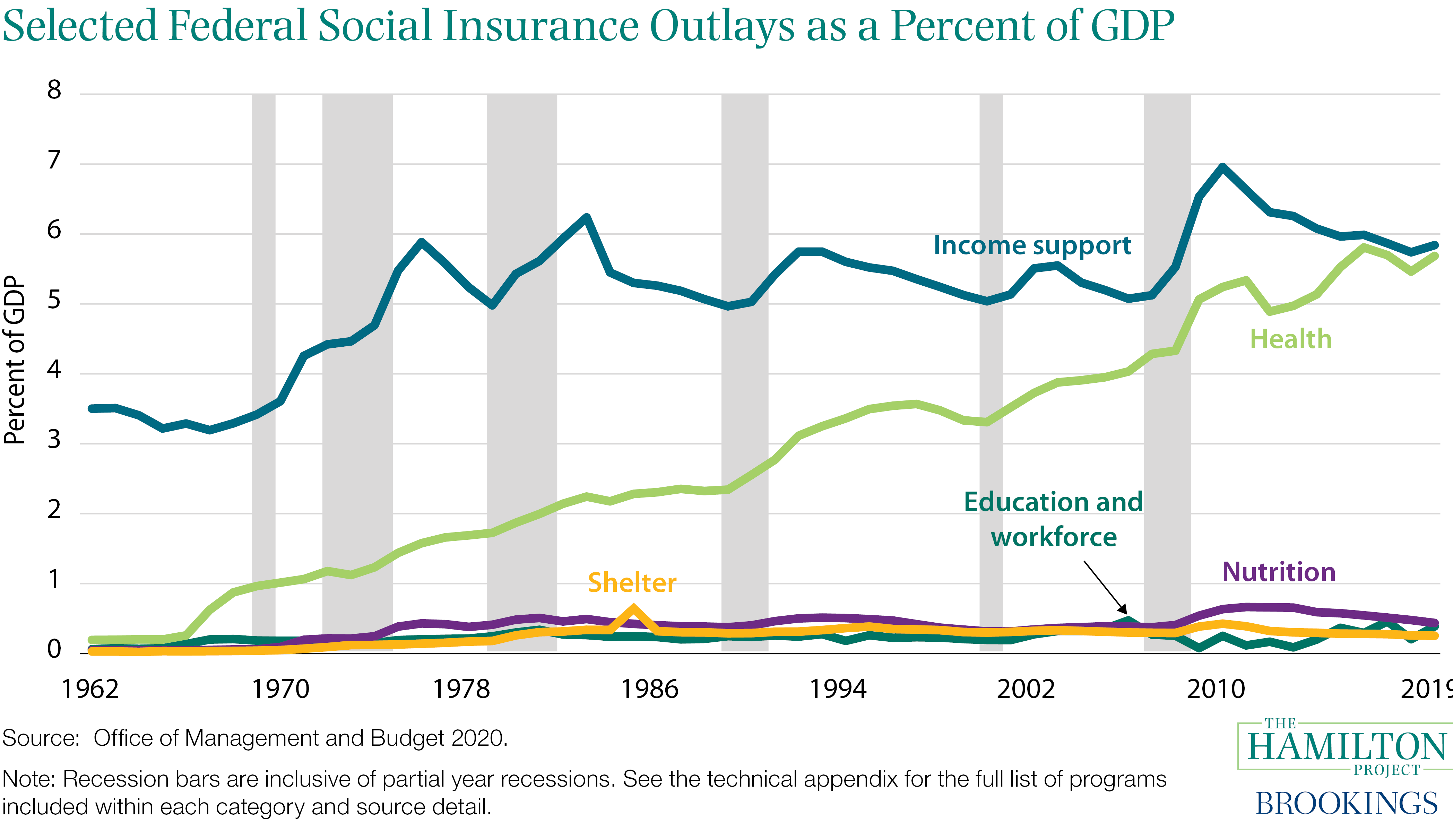 Related work includes: “A Plan to Reform the Unemployment Insurance System in the United States” by Arindrajit Dube; “Increasing Federal Investment in Children’s Early Care and Education to Raise Quality, Access, and Affordability” by Elizabeth E. Davis and Aaron Sojourner; “The Critical Role of Social Insurance in the US and Policies for Reform” by Elizabeth Lee, Sophia Mariam, Este Griffith, and Robert Greenstein.

To accompany Wendy Edelberg’s testimony before the House Committee on Transportation and Infrastructure, The Hamilton Project released a Facts Document to chronicle various aspects of the economic recovery through the first half of 2021. As shown in the figure, wages for workers in the bottom quartile of the wage distribution were up 7.0 percent from pre-pandemic level and real wages for this group rose 2.4 percent, with an acceleration of growth in summer 2021. 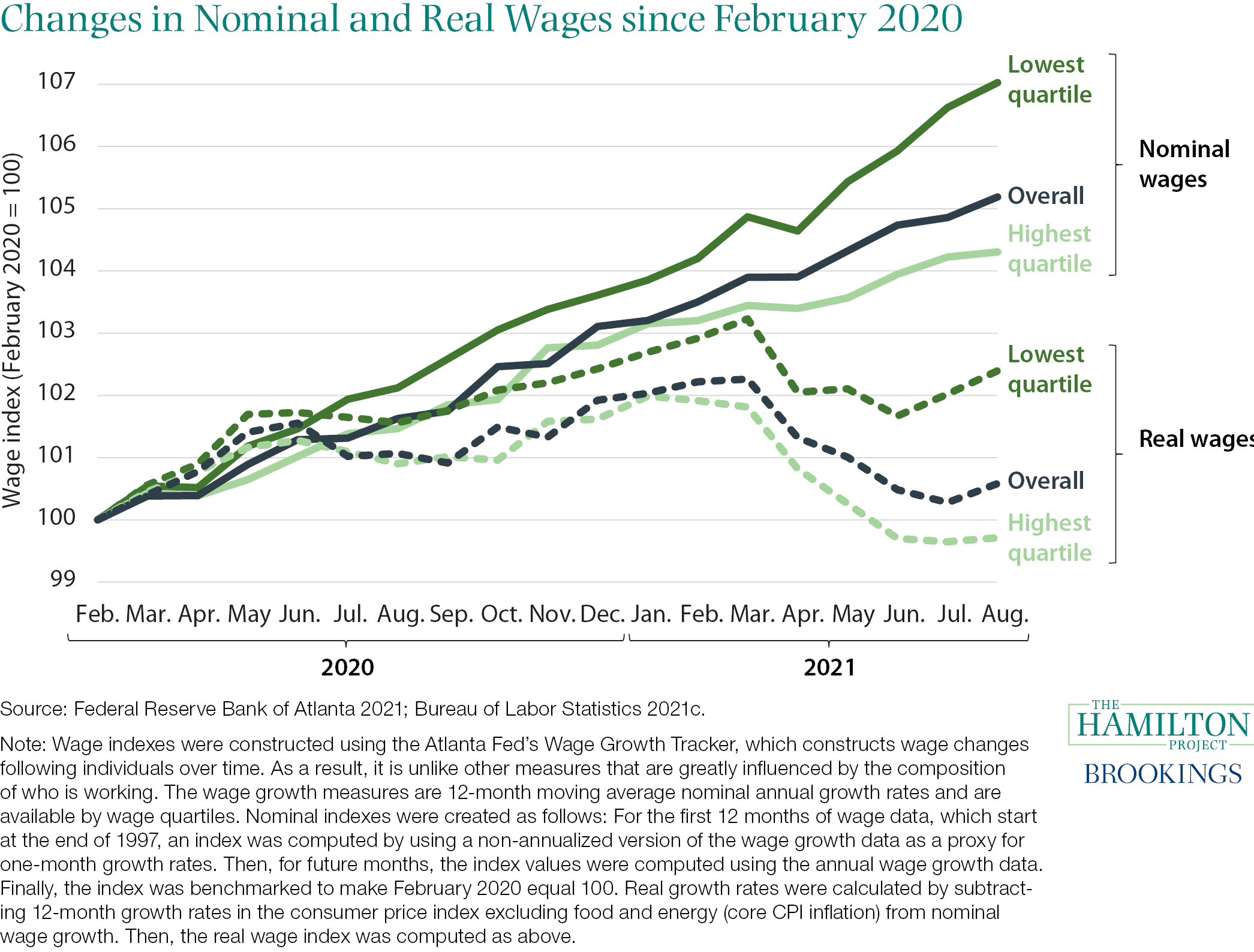 Following the U.S. Department of Agriculture release of its updated Thrifty Food Plan, a Hamilton Project blog describes how the new plan resulted in a 21 percent increase in the maximum SNAP benefit. Looking at changes to nutrition standards, dietary guidance, food prices, consumption patterns and the restraint of cost-neutrality, the piece walks through the Thrifty recalculation in historical and COVID-19 policy context. 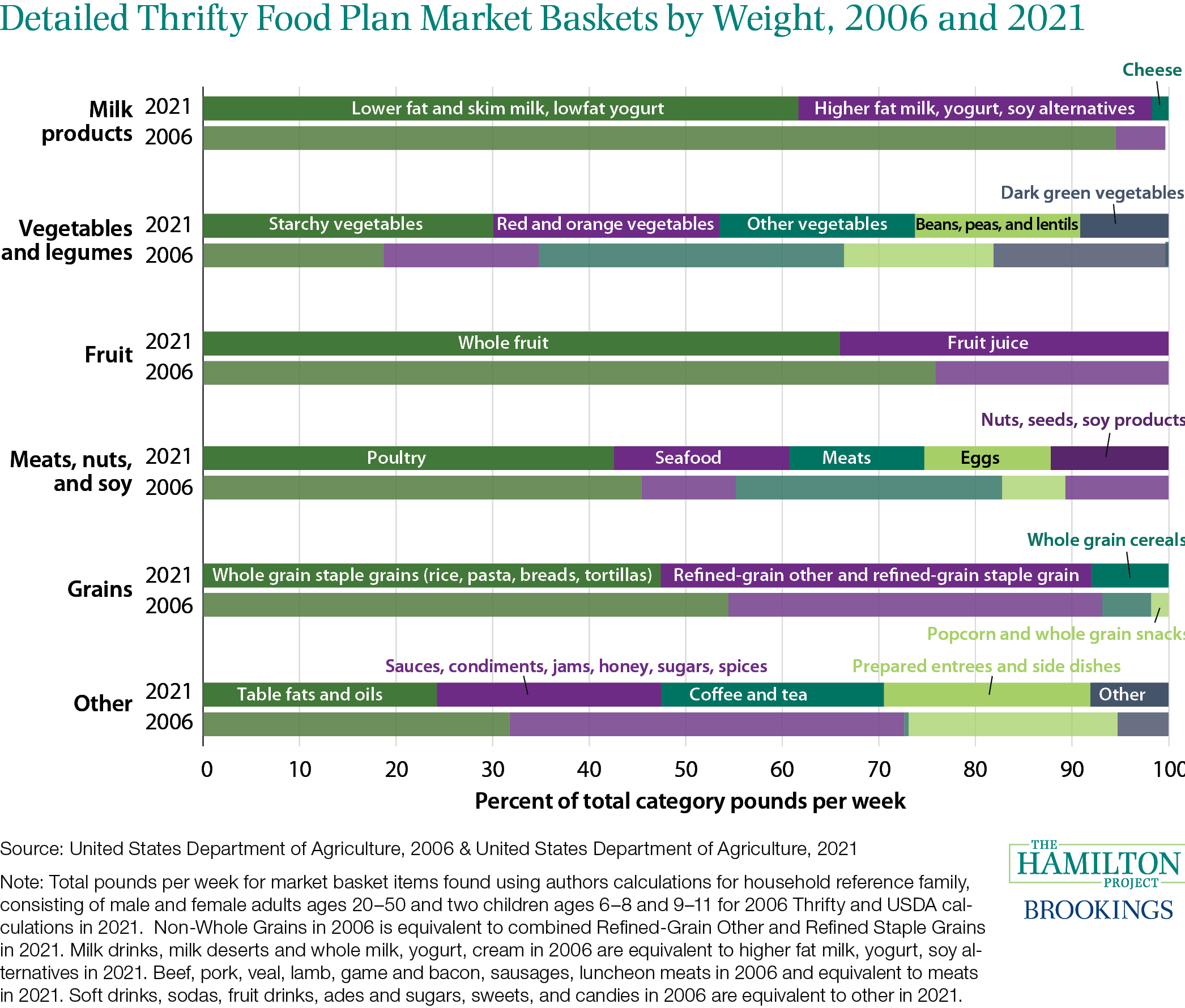 Related Hamilton Projects pieces include “An Update on the Effect of Pandemic EBT on Measure of Food Hardships” by Lauren Bauer, Krista Ruffini, and Diana Whitmore Schanzenbach.

September: In 2019, social insurance programs cut the poverty rate in half - as measured under the anchored Supplemental Poverty Measure (SPM).

By the Official Poverty Measure, poverty increased from 10.5 percent to 11.4 percent from 2019 to 2020. After taking into account the enormous fiscal support provided to households in 2020, the percentage of the US population in poverty, as measured by the Supplemental Poverty Measure (SPM), fell from 12.0 percent to 9.1 percent. The two policies that had the most significant effects relative to earlier years, because they were the most changed from prior policy, were the expansion of unemployment compensation and checks to households. If Congress had not enacted relief for families, SPM poverty would have risen to 12.7 percent rather than falling to 9.1 percent. A recent Hamilton Project economic fact paper describes the policies that aided the economic recovery from the COVID-19 pandemic. 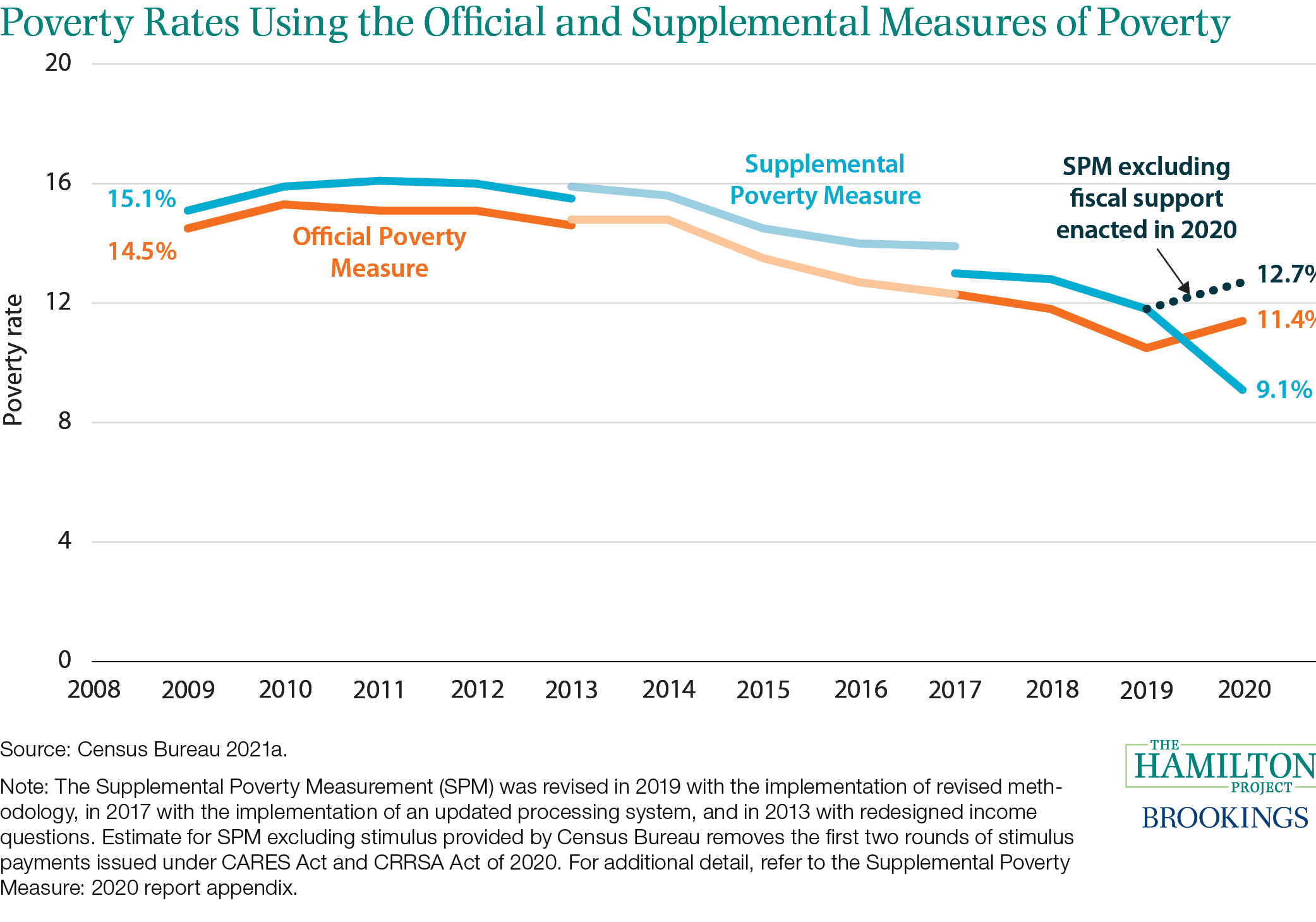 In 2021, The Hamilton Project published a framing paper as a capstone to a series of policy proposals on strengthening the social insurance system: “The Social Insurance System in the U.S.: Policies to Protect Workers and Families.”

October: COVID-19 has disrupted the post-secondary pipeline for young adults.

In an analysis of the disruptions to the postsecondary pipeline seen since the onset of the COVID-19 crisis and subsequent recession, The Hamilton Project found that the share of young adults who were enrolled in postsecondary education has declined by 1.0 percentage point during the 2020-2021 academic year. As students found the costs of attending college greater than the benefits during the COVID-19 pandemic, more young adults with a high school diploma did not enroll in postsecondary education; instead, they entered the labor force at much higher rates and with larger-than-usual wage gains. 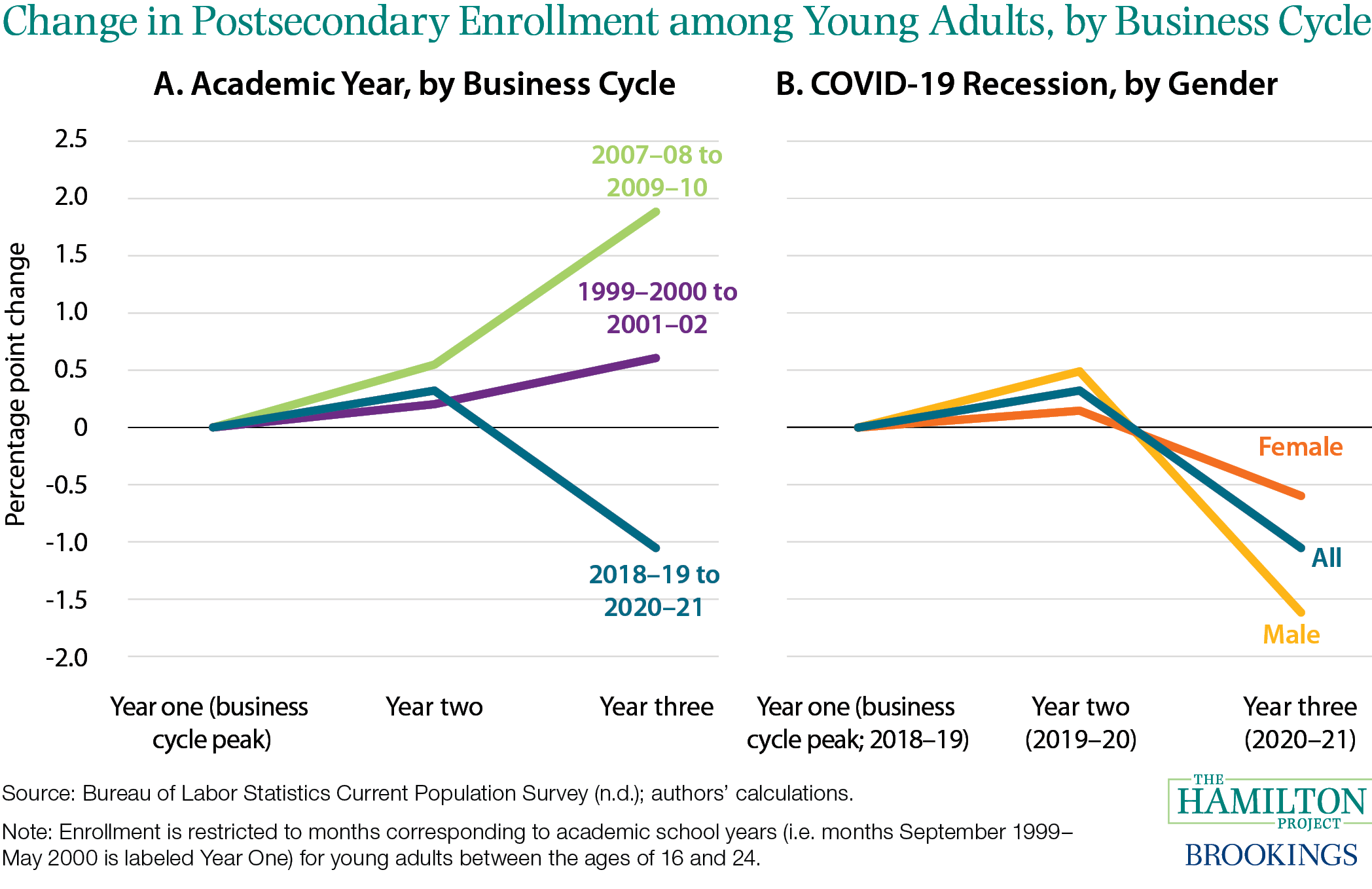 In addition to examining young people, The Hamilton Project commissioned analyses on how various segments of the population are faring in the recovery. This included analysis of Black Americans in “The Way Back: Assessing Economic Recovery Among Black Americans During COVID-19" Bradley Hardy and Trevon Logan and “Women, Work, and Families: Recovering from the Pandemic-Induced Recession" by Betsey Stevenson.

The 2021 spike in inflation was primarily driven by the inflation of core goods, The Hamilton Project found in a piece assessing inflationary pressures during the COVID-19 recovery. Three factors suggest that the late 2021 trends for rising inflation of core goods will not be long-lasting so long as the pandemic recedes: supply chain disruptions will resolve, consumers will begin to rebalance spending towards services, and support that financed the surge in goods spending will wane. 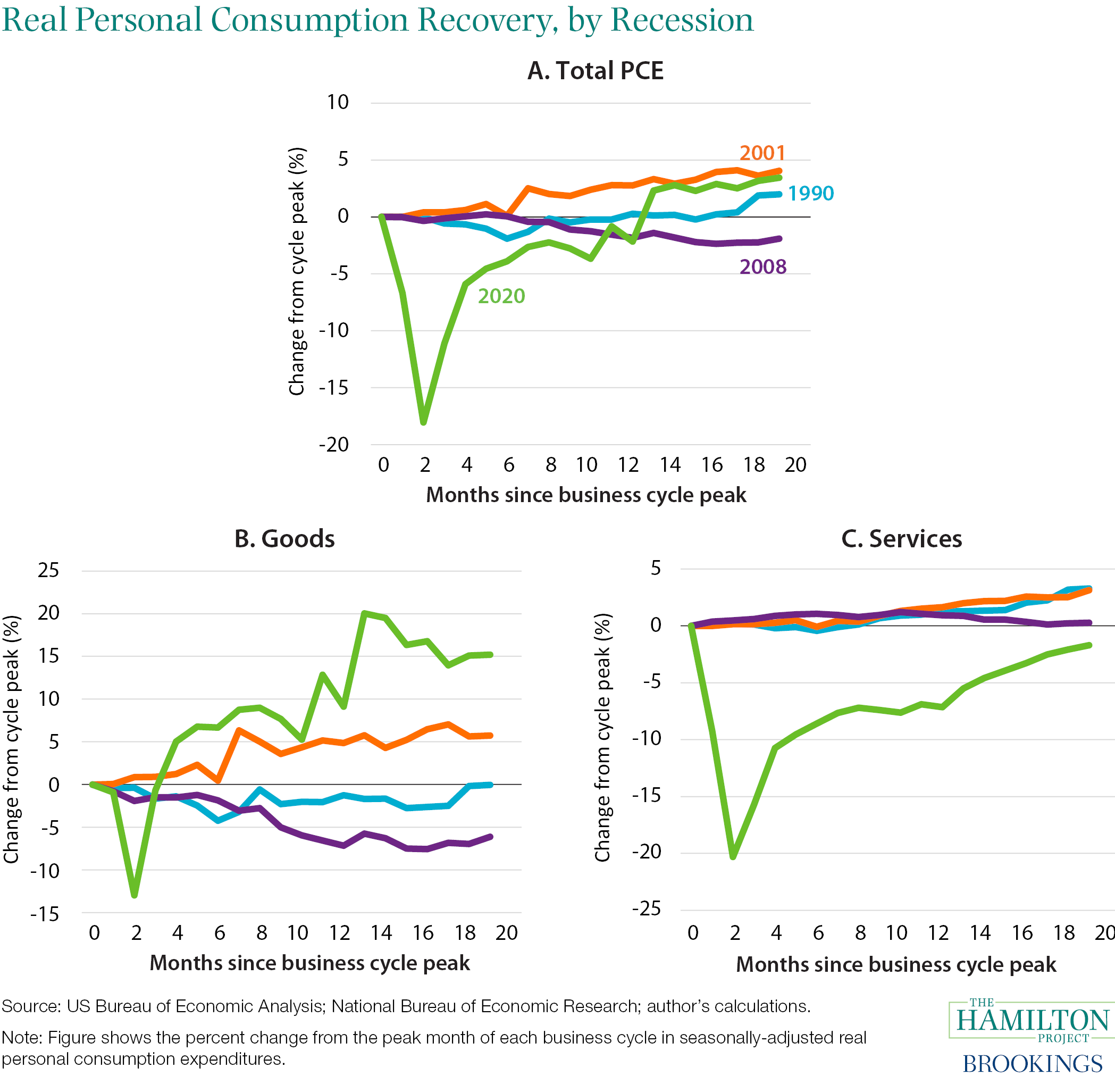 The Hamilton Project ended the year with a consideration of the current state of the labor market. From February 2020 to November 2021, population aging contributed -0.45 percentage points and changing participation contributed -0.87 percentage points to the total decline in the aggregate labor force participation rate. Half of the participation-related decline in LFPR over the past year-and-a-half is due to the declining propensity of those over the age of 55 to be working or looking for work. 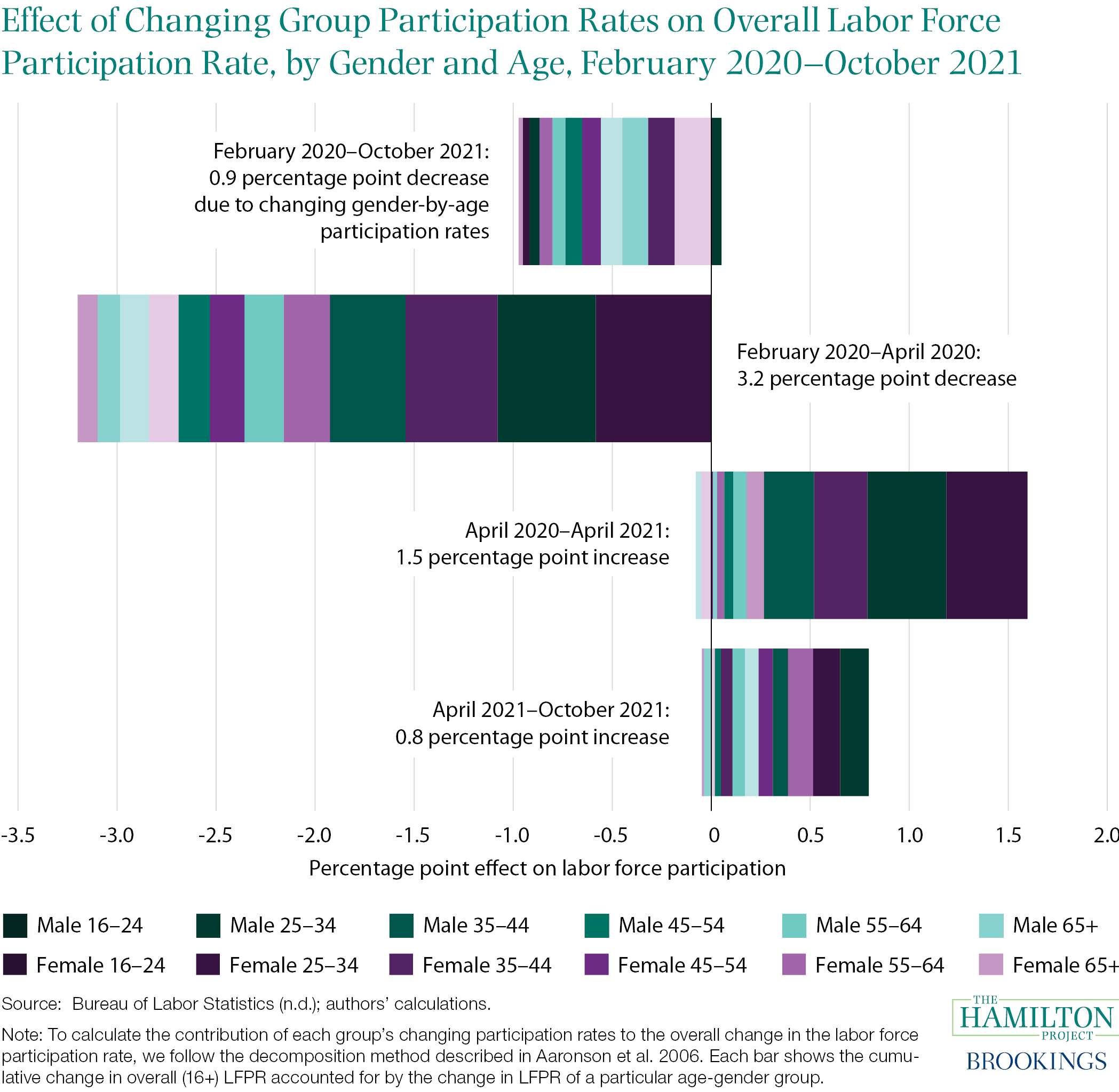 At the turn of 2022, The Hamilton Project will continue to track the economic recovery with special attention to the labor market.

Is the US ready for the next recession?

How did COVID-19 demonstrate the value of nontraditional data?