Since 2006, The Hamilton Project has produced original economic analyses, blog posts, and policy proposals with the goal of advancing inclusive economic growth that benefits all Americans.

In 2020, The Hamilton Project’s work spanned a wide range of policy topics, including tax policy reform, examining the racial wealth gap, lowering health-care costs, restoring productivity growth and innovation, and – beginning in the spring – the economic policy response to the COVID-19 recession.

In this blog post we highlight twelve figures—from Hamilton Project policy proposals, essays, and analyses – each representing a month during the year 2020.

January: Tax enforcement is at its lowest level in the last four decades.

A January 2020 Hamilton Project proposal, "Tax Reform for Progressivity: A Pragmatic Approach," by Natasha Sarin, Lawrence H. Summers, and Joe Kupferberg details several reforms to the tax system to combat illegal evasion and decrease opportunities for legal tax avoidance. Tax enforcement efforts today are at their lowest level of the last four decades, due to a lack of investment in monitoring tax compliance, with particularly large declines in audits of corporations. 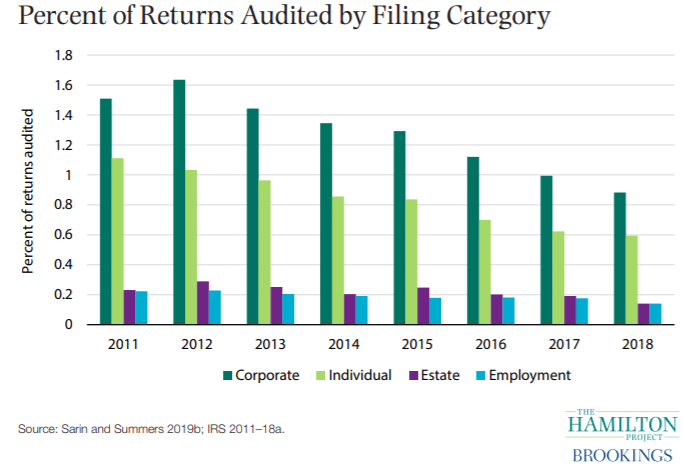 This policy proposal was published as a chapter in the Hamilton Project book, “Tackling the Tax Code: Efficient and Equitable Ways to Raise Revenue,” which includes seven policy proposals to increase federal revenue in ways that are both efficient and equitable. Other popular chapters from the book include, “Leveling the Playing Field between Inherited Income and Income from Work through an Inheritance Tax,” by Lily Batchelder and “Taxing Wealth,” by Greg Leiserson.

February: Over the last thirty years, median net worth for white households has far exceeded that of Black households.

In a February 2020 blog post examining wealth in the U.S., The Hamilton Project showed evidence of staggering racial disparities. The blog post reports that Black Americans have faced a long history of discriminatory housing practices, attacks on their communities, and deliberate barriers to accessing funds and policies meant to benefit all Americans. This history is passed down through large inequities in inheritances, which account for a great deal of current wealth in the U.S. The Black-white wealth gap reflects a society that historically has not and currently does not afford equality of opportunity to all its citizens.

In addition to this blog post, The Hamilton Project released “The COVID-19 Public Health and Economic Crises Leave Vulnerable Populations Exposed;” and updated this analysis in “The Black-White Wealth Gap Left Black Households More Vulnerable;” as well as an economic analysis, “Racial Economic Inequality Amid the COVID-19 Crisis.”

March: The United States has dramatically higher healthcare prices than other advanced economies.

The United States has dramatically higher health-care prices than other advanced economies. This is the case for surgical procedures, diagnostic tests, prescription drugs, and almost any other type of health-care service. As illustrated in a March 2020 set of Hamilton Project economic facts, "A Dozen Facts about the Economics of the U.S. Health-Care System," disparity in healthcare costs happen, in part, because the U.S. pays much of the fixed costs of drug research and development. This provides implicit subsidies to other countries, many of which impose price controls on prescription drugs. In addition, excess administrative costs and generally higher wages for highly educated health-care workers in the United States contribute to relatively high U.S. prices. 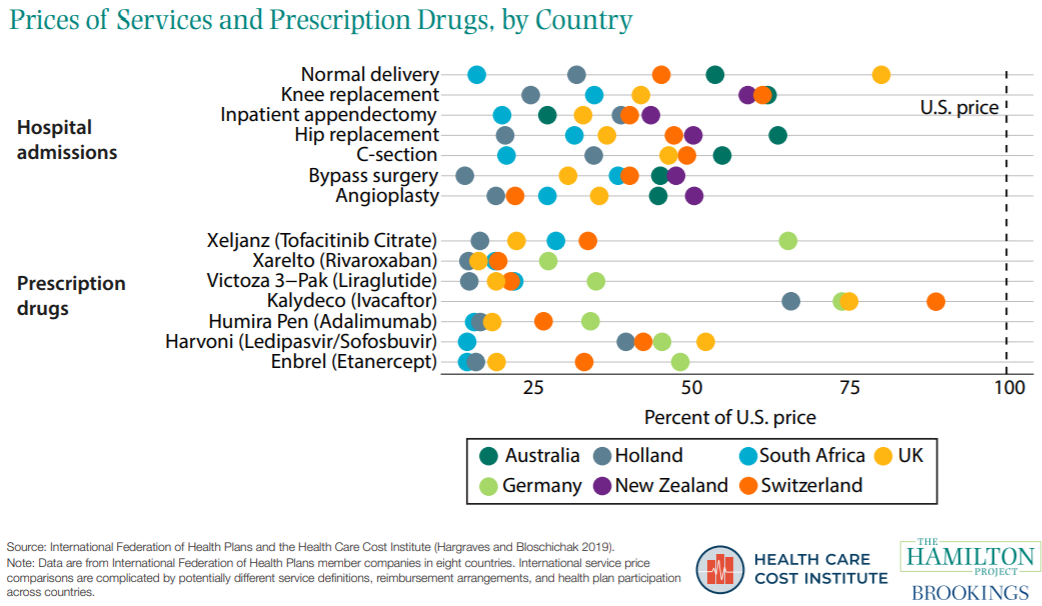 April: Had the final SNAP work requirement rule taken effect, more than a million Americans would have lost access to nutrition assistance. 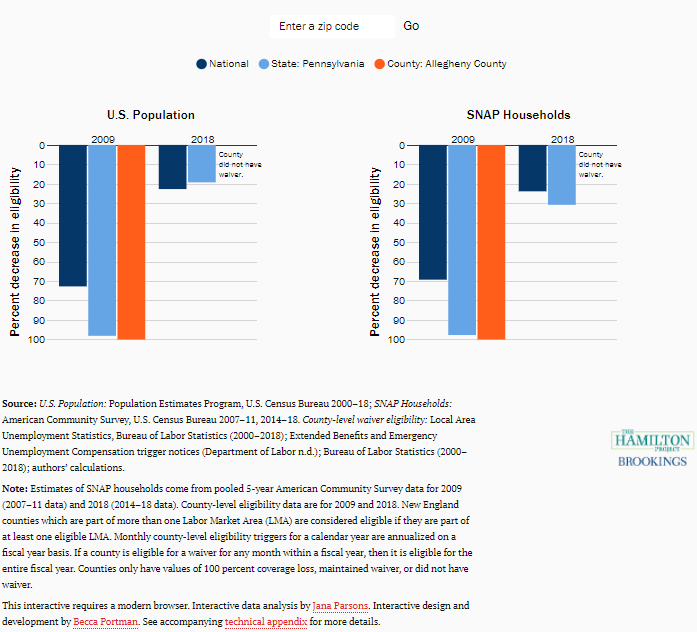 This interactive was accompanied by an economic analysis, “Who Stands to Lose if the Final SNAP Work Requirement Rule takes Effect?” by Lauren Bauer, Jana Parsons, and Jay Shambaugh.

May: The onset of food insecurity at the start of the COVID-19 recession was speedy and severe.

A May 2020 Hamilton Project blog post examined the record high proportion of children going hungry during the COVID-19 pandemic. Lauren Bauer compared current and historical trends through the last two decades to illustrate this unprecedented rise in food insecurity. Overall, food insecurity in children increased 130 percent between 2018 and April 2020; and in households with children age 12 and under, almost 20 percent of the children of these households experienced food insecurity.

Related Hamilton Project pieces include “Why Extend Pandemic EBT? When Schools are Closed, Many Fewer Eligible Children Receive Meals" by Lauren Bauer and Jana Parsons, as well as Lauren Bauer’s further updates on food insecurity among children: “About 14 Million Children in the US Are Not Getting Enough to Eat” from July and “Hungry at Thanksgiving: A Fall 2020 Update on Food Insecurity in the U.S” from November.

Economic growth requires productivity growth, which has generally slowed over the past half century. All major advanced economies, including the U.S., have experienced this slowdown. A June 2020 Hamilton Project framing paper discusses policies that could help restore labor productivity growth, which would also raise stagnant living standards. The authors offer multiple policy solutions in their framing paper, such as greater investments in human capital and reforms to the intellectual property system. 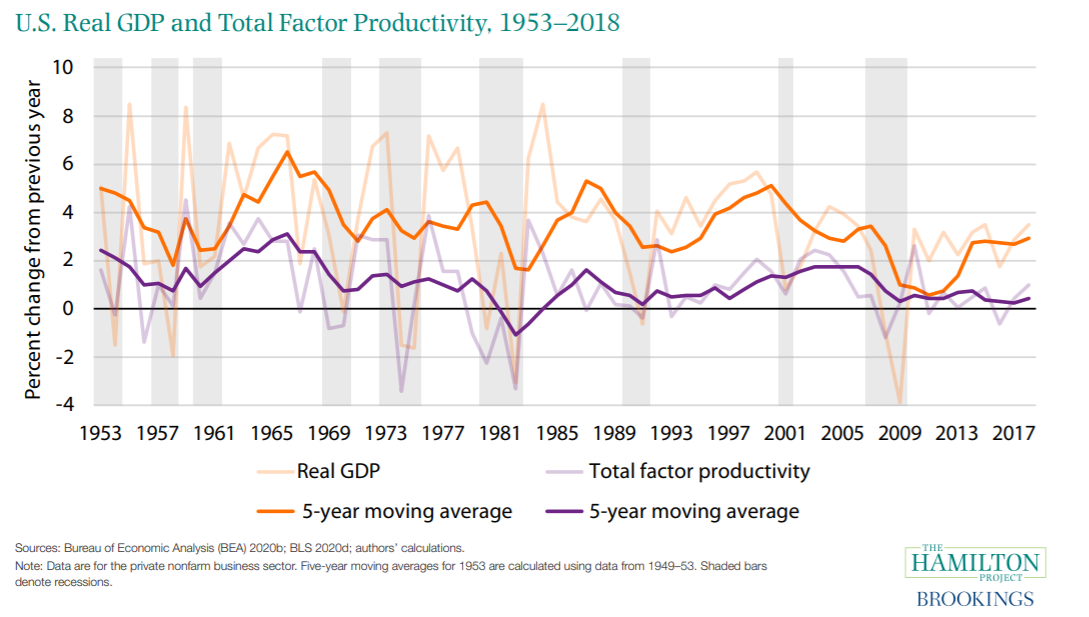 This framing paper was part of a larger event, “How Innovation Can Power Economic Growth.” The Hamilton Project released three other papers centered around innovation for this event: “Reforming the Patent System" by Lisa Larrimore Ouellette and Heidi Williams; “Policies to Broaden Participation in the Innovation Process" by Lisa Cook; and “Innovation Policies to Boost Productivity" by John Van Reenen.

July: The COVID-19 pandemic is stimulating permanent changes to the economy.

The COVID-19 pandemic has produced the quickest and most severe economic downturn in U.S. history. This recession has instigated or accelerated changes to the economy, including increasing concentration among businesses, hastening automation, and large decreases in labor force participation rates of certain demographics. A July 2020 Hamilton Project framing paper showed the speed and severity of U.S. recessions as measured by months from a business cycle peak and the percent change in employment since the peak, respectively. 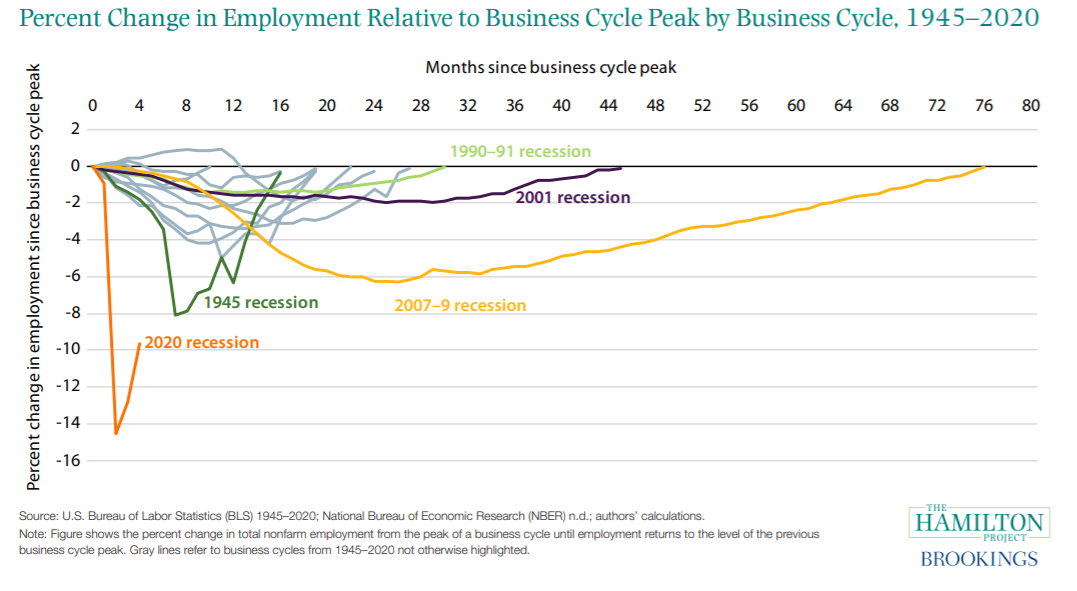 This framing paper was part of a larger event, “How COVID-19 is Reshaping the Future of Business and Work.” For this event, The Hamilton Project released three other papers about the COVID-19 pandemic’s structural effects: “The Nature of Work after the COVID Crisis: Too Few Low-Wage Jobs” by David Autor and Elisabeth Reynolds; “COVID-19 and Attachment to the Labor Market” by Betsey Stevenson; and “Will Competition Be Another COVID-19 Casualty?” by Nancy Rose.

In an August 2020 Hamilton Project blog, Jevay Grooms, Alberto Ortega, and Joaquin Alfredo-Angel Rubalcaba find that, among other challenges, between March and July 2020 Black and Hispanic individuals were more likely to be unemployed and uninsured—both of which increase household welfare risks during the COVID-19 pandemic. They document significant income disparities by both employment status and race and ethnicity.

This piece was part of a larger event, “Black Households & COVID-19: Impediments to Economic Security.”  Bradley Hardy and Trevon Logan authored “Racial Economic Inequality Amid the COVID-19 Crisis,” an essay that focuses on the COVID-19 pandemic’s disproportionate impact on Black Americans.

September: The COVID-19 pandemic has led to significant declines in small business revenue.

In a September 2020 set of economic facts on COVID-19 and the U.S. economy, The Hamilton Project showed that the COVID-19 pandemic has been particularly damaging for small businesses, which represent the majority of businesses in the United States. In particular, sectors that have seen severe declines in revenue include the leisure and hospitality sectors, as well as the education and health services sectors. 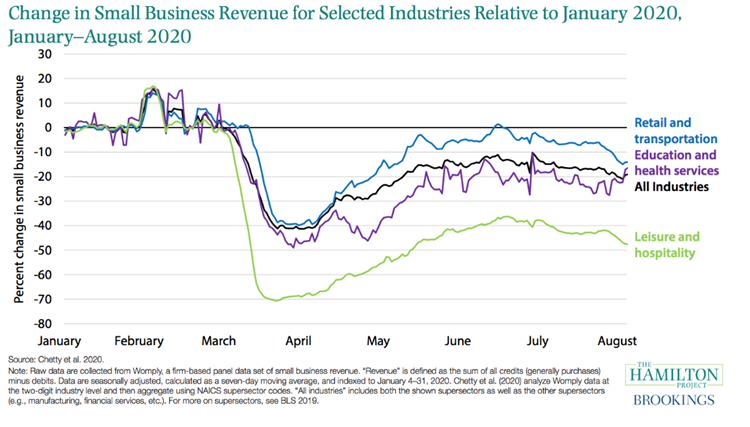 In addition to the set of economic facts by The Hamilton Project, we released a paper titled “From Survival to Revival: How to Help Small Businesses through the COVID-19 Crisis” by Steven Hamilton and hosted a webcast event on “Small Businesses and COVID-19: Supporting Firms at Risk of Failure”.

October: Additional fiscal support can return the economy to its pre-pandemic path by mid-2021.

In partnership with The Hutchins Center on Fiscal and Monetary Policy, The Hamilton Project released an analysis by Wendy Edelberg and Louise Sheiner that projects the effect of five illustrative fiscal policies on the economy for the next three years: rebate checks of up to $1,700 per adult and a $700 child tax credit, $300 per week in additional unemployment insurance payments, $400 billion in aid to state and local governments, $400 billion in small business grants, and $400 billion for other policies such as COVID-19 testing and contact tracing, higher education, and aid to airlines. The analysis finds that if all five policies were enacted, for a package totaling $2 trillion dollars, economic activity would be back to its pre-pandemic level by the middle of 2021, years ahead of predictions under current law. However, even under this scenario, cumulative GDP growth through 2023 would still be far below its pre-pandemic projections.

More Hamilton Project analyses on how timely, well-targeted fiscal policy can help combat recessions and their effects on workers and families include “We Are Already in a Recession: Can We Make It a Short One?” and “We Need to Let Economic Data Guide Further Policy Responses to COVID-19” by Jay Shambaugh, as well as a 2019 policy book titled “Recession Ready: Fiscal Policies to Stabilize the American Economy”.

November: As the COVID-19 pandemic continues, many temporary layoffs have become permanent.

Early in the pandemic, most workers who lost jobs were laid off temporarily, as businesses expected to reopen and recall their workers. However, in the Hamilton Project analysis, “Tracking the mounting challenges among those who have lost their jobs,” Wendy Edelberg and Stephanie Aaronson find that an increasing share of unemployed workers have gone on permanent layoff with no expectation of being recalled. The rise in permanent layoff is problematic because workers whose previous jobs are permanently gone find employment more slowly and are less likely to be connected to the workforce than those on temporary layoff. Additionally, the analysis finds that each month a larger fraction of those on permanent layoff leave the labor force altogether. 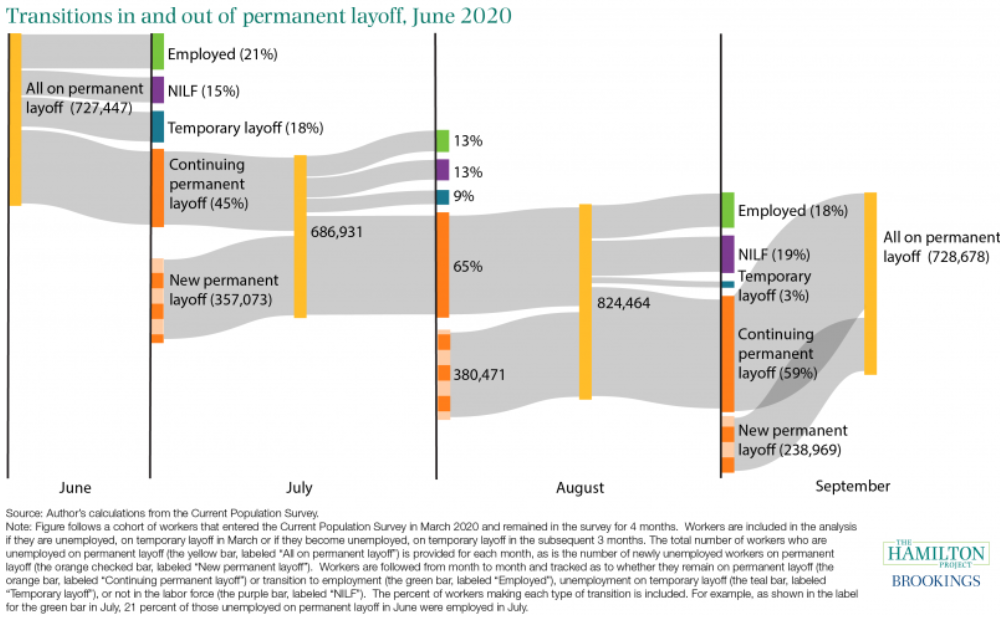 Earlier in the year, The Hamilton Project released an analysis titled “How Long Can We Expect Temporary Layoffs to Remain Temporary” by Ryan Nunn and Jana Parsons, as unemployment insurance (UI) claims spiked in mid-March. In her THP commissioned paper, “The Initial Impact of COVID-19 on Labor Market Outcomes Across Groups and the Potential for Permanent Scarring”, author Betsey Stevenson also discusses ways in which COVID-19 has dealt permanent damage to employment relationships and labor force attachment.

December: Without action, more than 13 million Americans will lose unemployment compensation in the coming weeks.

While Congress extended and expanded access to unemployment insurance (UI) earlier in the year, these measures are set to expire on December 26, 2020. Compounding challenges for displaced workers are the potential expiration, commonly referred to as “triggering off”, of Extended Benefits (EB), which prolong the number of weeks of UI benefits are available when certain economic conditions are met. Approximately 10 million workers will immediately lose unemployment compensation on December 26 and about 4 million additional workers will be in danger of losing their benefits within weeks.

A December 2020 Hamilton Project interactive and accompanying report shows the insured unemployment rate (share of people collecting UI benefits, also known as IUR) in each state from 2007-2020. In addition, users can find out whether EB has been triggered off as of November 29 for each state. 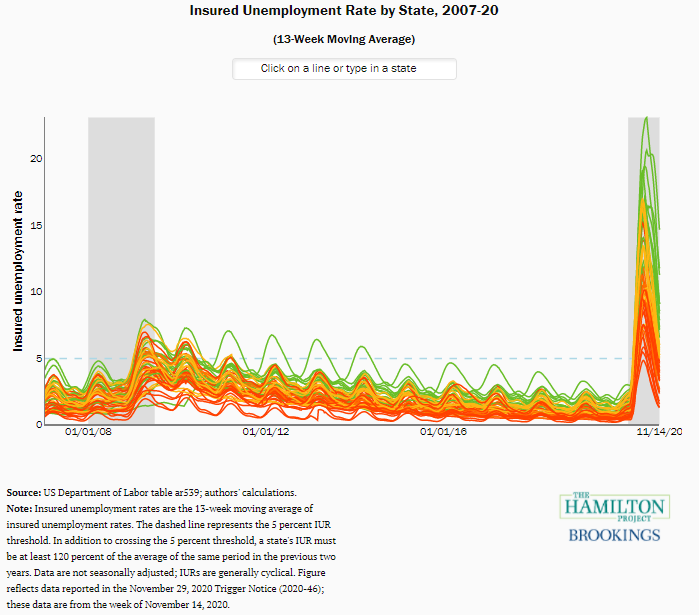 This interactive was accompanied by an analysis titled, “There are too many ways to lose unemployment insurance” by Lauren Bauer, Wendy Edelberg, and Stephanie Lu. Additional Hamilton Project work on Extended Benefits (EB) include an August 2020 analysis titled “Unemployment Insurance Extended Benefits will lapse too soon without policy changes” by Lauren Bauer, Wendy Edelberg, and Jana Parsons as well as a 2019 policy proposal, “Unemployment Insurance and Macroeconomic Stabilization,” by Gabriel Chodorow-Reich and John Coglianese.