Want to be the first to hear about new research published in the Brookings Papers on Economic Activity (BPEA), the academic journal published twice a year by the Economic Studies program at Brookings? Subscribe here to hear about research, events, and other opportunities, including a new paper in early September by Dr. Ben Bernanke on the 2008 financial crisis.

In 2014, eBay started using a specialized in-house machine-learning tool in place of Bing Translator to translate English search queries and product listings into Spanish, resulting in a moderate increase in translation quality. Using administrative data from eBay, Erik Brynjolfsson of MIT and Meng Liu and Xiang Hui of Washington University in St. Louis find that eBay’s introduction of this system increased the quantity of exports on the platform from the United States to Spanish-speaking Latin American countries by 17.5 percent. The effect was more pronounced for differentiated products, products with more words in the title, and less experienced buyers, which suggests that the machine-learning tool reduced translation-related consumer search costs, the authors say. Their results indicate that language barriers hinder trade and that artificial intelligence can improve efficiency by providing fast, accurate translations.

Before 2012, U.S. airlines did not have to disclose taxes and mandatory fees when they advertised fares so it was difficult and time-consuming for passengers to compare tax-inclusive prices. In 2012, the government began requiring airlines to incorporate the taxes and fees in their advertised fares.   Sebastian Bradley of Drexel University and Naomi Feldman of the Federal Reserve Board find that this rule change lowered the ability of airlines to pass taxes on to consumers in the form of higher prices: the pass-through rate was nearly 100 percent before the rule change, but only 25 percent after it. Despite the decline in the pass-through rate, consumers perceived higher prices after the rule change and reduced their demand for tickets, particularly along high tax routes.

Chart of the week: Germany’s current account surplus as a share of GDP is much larger than China’s 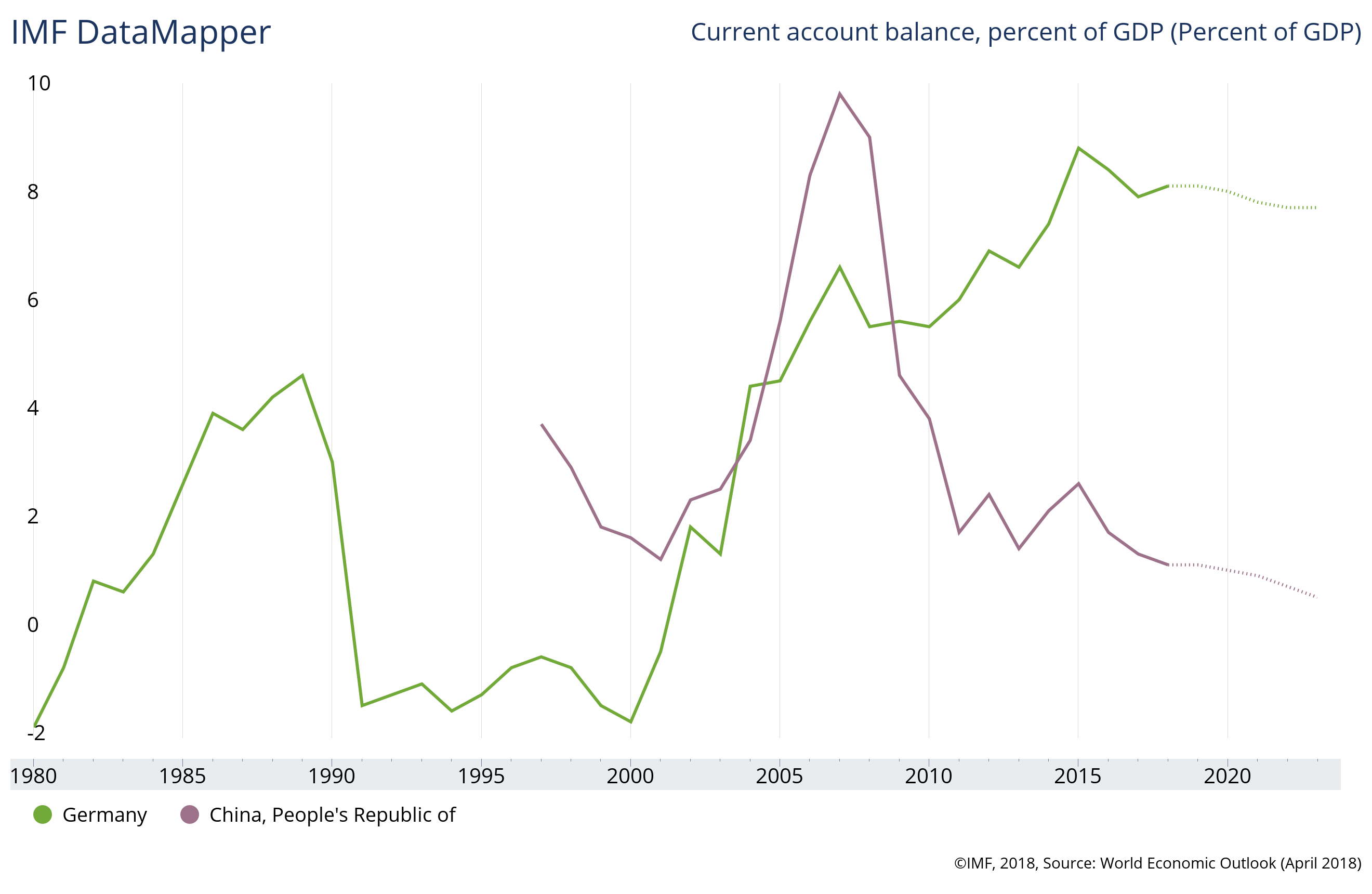 “When it comes to monetary policy and financial stability, there is now a substantial body of evidence which suggests that monetary policy affects economic agents’ willingness to take on risk. By lowering risk-free interest rates, monetary policymakers raise the attractiveness of riskier financial assets. With investors searching for yield or simply rebalancing their portfolios, prices of risky assets then also increase. …To some extent, the impact of monetary policy on risk taking is not a mere side effect. In their efforts to stimulate the economy, central bankers are also pinning their hopes on the portfolio-rebalancing channel. But monetary policy also affects the propensity of banks to assume risks in another, unintended way: the more protection is provided against potential risks, and the clearer the prospect of easy funding if push comes to shove, the less wary banks might be of taking on excessive risk,” says Jens Weidmann, president of the Deutsche Bundesbank.

“Taking on financial stability as an additional objective for monetary policy would likely do more harm than good.  … But given the uncertainty about the effectiveness of macroprudential tools, should monetary policy remain completely passive if financial imbalances were to build up? In my view, this would be a mistake. As we have witnessed, financial crises have a considerable impact on macroeconomic outcomes and, ultimately, central banks’ ability to guarantee price stability. … In the long term, price stability and financial stability can complement each other. Thus, taking a longer-term perspective on inflation, central banks might be compelled to act on the build-up of financial imbalances despite having a single objective.”