For at least four decades, economists have analyzed the relationship between per student spending and learning outcomes across the United States and, more recently, across countries around the world. In 1996, as a result of a Brookings conference, the influential book “Does Money Matter?: The Effect of School Resources on Student Achievement and Adult Success” was published, edited by economist Gary Burtless and with contributions from several well-known economists. The book focuses on the puzzle between research evidence from the U.S. that found that more resources did not necessarily result in improved student achievement and evidence showing that students who attend well-resourced schools end up having better outcomes later in life than students who attend poorly-endowed schools.

Indeed, a simple correlation analysis using cross-country data suggests that there is at best a weak relationship between student achievement and education spending. In other words, when comparing per pupil spending and average learning outcomes per country, we find that countries with similar levels of spending per student also show enormous differences in how much their students learn. Figure 1 shows the simple correlation between mean scores in math in the Organization for Economic Co-operation and Development’s (OECD) Program for International Student Assessment, or PISA, and per pupil spending in secondary education for each of the countries that participated in PISA 2012. It is easy to see that students in countries like Qatar and Singapore, which spend similar amounts of dollars per student, achieve vastly different PISA math scores.

Figure 1: Per pupil spending and mean math scores in PISA 2012, by country 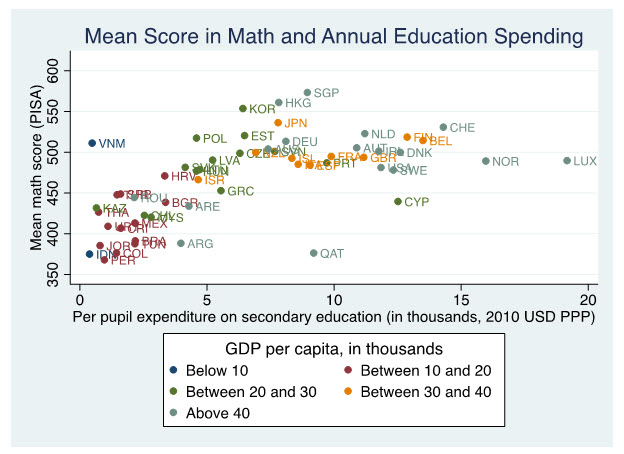 Working in developing countries throughout my career, I was always struck by the weak relationship between spending and outcomes. While, it was clear that differences in student learning between countries with similar spending levels, such as Qatar and Singapore, support the leading argument that how money is spent in education is more important than how much, I wondered whether this was only  the case for countries that spend above a minimum level—a level that guarantees a minimum standard of basic inputs to ensure adequate learning opportunities for all.

With my colleague Chelsea Coffin, I set out to explore the relationship between per pupil spending and learning, particularly in developing countries that spend much lower levels in education than do OECD countries. To do this, we separated countries that have participated in PISA into two groups based on their level of per pupil expenditure: a low-spending group, comprised of countries that spend less than a certain threshold per student; and a high-spending group, which included the countries that spend more than that threshold. Then, we designed separate regressions to estimate the relationship between spending and student learning (as measured by PISA) within these two groups of countries. We wanted to see if, among the low-spending group, more spending is associated with higher outcomes. Additionally, we wanted to estimate the per pupil spending level at which more money no longer can be associated with higher learning outcomes.

Put simply, our underlying hypothesis was that if Haiti only spends $100 per student, common sense suggests that it cannot reach the average learning levels of OECD countries that spend much more per student. However, does the country need to increase spending to the U.S. level ($11,732) or Finland’s level ($9,353) in order for their students to be able to learn the basic skills necessary compete in today’s global economy?

Our findings, reported in the Comparative Education Review suggest that, when education systems spend above $8,000, the association between student learning and per student spending is no longer statistically significant. Therefore, we find a threshold effect after this level of resources is met, indicating a declining relationship between resources and achievement at high levels of expenditure (consistent with other recent literature). This can be seen in Figure 2, where there is a positive relationship between student learning and per pupil expenditure among the low-spending countries (below $8,000 per student), but a flat relationship among high-spending countries. 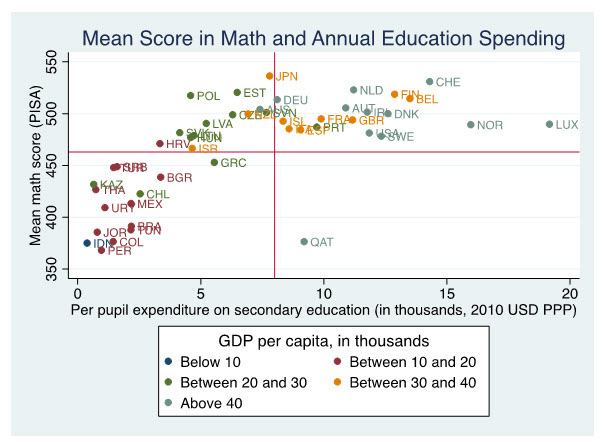 One interpretation of our analysis, consistent with prior studies, is that efficient spending is more important among systems that already provide the basic inputs necessary for a quality education (as measured by their average spending per pupil). High spenders might also spend more on programs that compensate for students with disadvantaged backgrounds, helping mitigate inconsistent gains in test scores or proficiency. But when low spenders increase expenditure, it may be used to establish basic conditions or increase quality to a minimum standard, although efficient use of these resources may also be a constraint to achieve high levels of learning for all.

Our findings are also important in light of another strand of the economics literature. Research on the factors that explain differences in student learning has empirically demonstrated that, from the school side, high quality teachers (as measured by teachers’ capacity to generate learning in their students, or teacher value-added) are the most important determinant of student learning (See Hanushek 2011, Hanushek and Kain 2012, and Chetty et al 2014a and 2014b). Influenced by this evidence, international organizations have prioritized attracting, motivating, and retaining talented teachers as a means to improving learning outcomes. And, like in any other profession, compensation matters. Unfortunately, only in a few countries is teaching a truly competitive career for talented professionals.

In short, improving education outcomes in Latin America and the Caribbean requires more and better investment. These countries still need to increase overall spending for education in order to provide the basic learning inputs to students. More importantly, in too few if any countries in Latin America is teaching a valued profession that attracts the most talented individuals. While some countries have introduced bold reforms to improve teaching conditions, attract better professionals, and set up teacher evaluation systems to guide teaching practices, much more remains to be done to ensure that all Latin American students have access to effective teachers.