Budgeting rules of thumb will tell you to follow the 50-30-20 guideline. Once you have calculated your after-tax income, you should allocate 50 percent to necessities, such as transportation and housing, 30 percent to “wants,” which include anything from phone bills to vacations, and 20 percent to savings for the future and repaying any debts. But the unfortunate truth is that for many Americans these guidelines simply aren’t realistic. Housing prices have risen, and while innovations may have made food and clothing more affordable, they’ve also contributed to the ever-rising cost of health care. As a result, low-income households are under increasing pressure to make ends meet, not to mention invest in their future economic security. 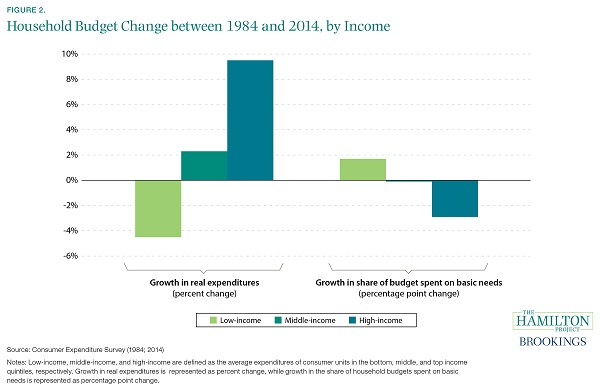 In some instances, increased spending on basic needs has been associated with rising prices that are outside the control of individual consumers. Health care is one example, with both low- and middle-income households increasing their shares of spending on health care as prices rise much more quickly than for other goods and services. Expenditures on health care have increased dramatically from relatively low levels in 1984, though food, transportation, and housing remain more important in household budgets.

Because most of the low-income household budget is devoted to basic needs, households can face serious dilemmas about how to best spend their money. Often, the pressures of a basic needs budget force households to make tradeoffs with serious consequences for their health and well-being:

With limited savings and a large share of their budgets devoted to basic needs, low-income households are less able to sustain increased spending on any one category (e.g., unexpected health expenses) while maintaining expenditures on other basic needs. 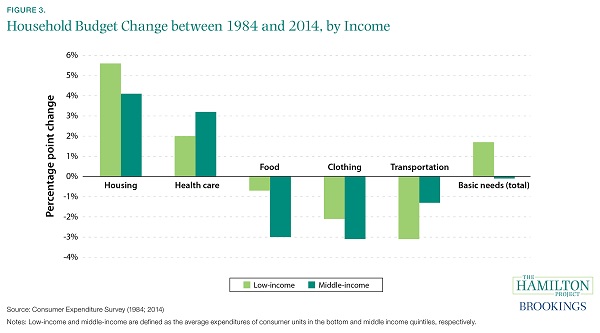 Social safety net programs, such as the Supplemental Nutrition Assistance Program (SNAP), help households afford basic needs during times of economic hardship must themselves keep pace with changing consumption norms and budget pressures. In the case of SNAP, the largest federal nutrition assistance program, benefits are calculated based on food consumption patterns that no longer hold in the modern economy; the Hamilton Project recently released a proposal to modernize this aspect of the program. As the economic environment changes, policy should continue to support broad-based economic progress and security.

Mapping gun violence: A closer look at the intersection between place and gun homicides in four cities

John Fitzgerald and Robert A. Moffitt
Wednesday, March 23, 2022
Get daily updates from Brookings