Studies in this week’s Hutchins Roundup find that spending on defense produces the expected fiscal effect only after a significant lag, the Fed’s maturity extension program benefitted some firms but increased the risks for others, and more.

Defense spending does not help in recessions

Using a new panel dataset of annual federal defense contracts at the state level, Bill Dupor of the Federal Reserve Bank of St. Louis finds that aggregate and local multipliers differ dramatically because of spillovers across states, indicating that local multipliers alone do not provide useful information about the aggregate effects of policy. He finds that it takes four years for changes in defense spending to affect national income or employment, suggesting that defense spending is not an effective countercyclical policy.

Nathan Foley-Fisher of the Federal Reserve Board, Rodney Ramcharan of the University of Southern California, and Edison Yu of the Federal Reserve Bank of Philadelphia find that the Fed’s maturity extension program of 2011 – the selling of hundreds of billions of shorter‐term Treasury securities and use of the proceeds to buy longer‐term Treasury securities – helped relax financial constraints for firms that rely on longer-term debt. They also find evidence that some institutional investors “reached for yield” by increasing their holdings of riskier corporate debt in response to low long-term Treasury rates.

Using a novel dataset covering a 140-year history of elections in 20 advanced economies, Manuel Funke of the Free University of Berlin, Moritz Schularick of the University of Bonn, and Christoph Trebesch of the University of Munich find that financial crises increase the vote share of far-right parties by 30% on average. The authors suggest that, after financial crises, voters may be more attracted to the rhetoric that attributes blame to minorities or foreigners. They do not find similar effects in normal recessions.

Chart of the week: The number of employed part-time for economic reasons has been falling 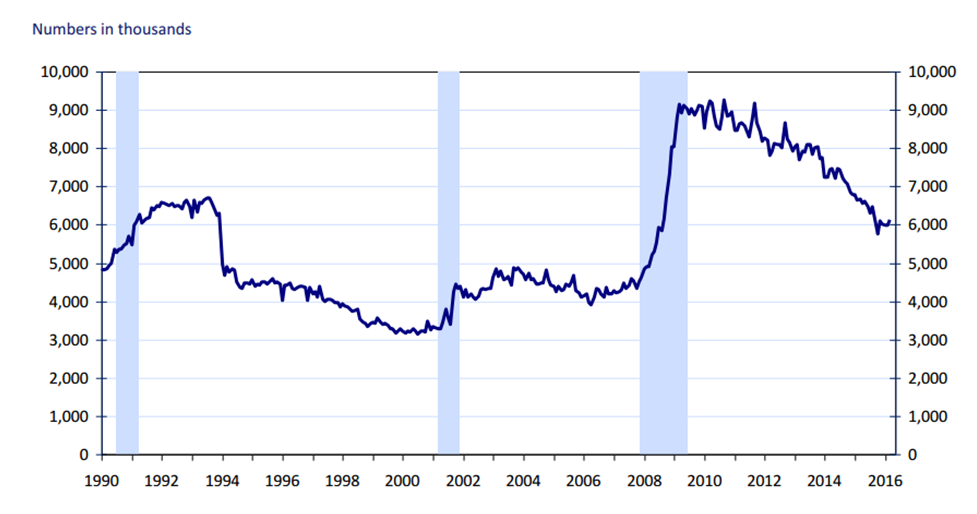 Quote of the week: “Why has it been so hard to get traditional, fundamental tax reform enacted with the classic broader base and lower rates?” asks Council of Economic Advisors Chair Jason Furman

“The classic explanation is grounded in the logic of collective action: Tax reform imposes concentrated costs while offering only diffuse benefits. The gains for the winners are not large enough to inspire a sustained fight for changes to the code, while the losers are acutely aware of their potential losses and mobilize to stop them. Moreover, in the case of tax reform, even the winners might not pursue reform. Some can focus on losing a salient deduction without factoring in the overall rate reduction removing that deduction funds.”

— Jason Furman, Chairman of the Council of Economic Advisers