Studies in this week’s Hutchins Roundup find that increased bank supervision does not reduce banks’ earnings or growth, privatization of bus service is associated with substantial savings, and more.

Beverly Hirtle, Anna Kovner and Matthew Plosser of the New York Fed find that the five largest bank holding companies in a Fed district receive more hours of supervisory attention than neighboring smaller institutions and appear to take fewer risks. Even after controlling for size and other characteristics, the bigger holding companies display less volatile earnings and market returns, hold less risky loan portfolios, and engage in more conservative loan loss reserving practices than otherwise similar firms. However, those intensely supervised holding companies do not experience slower asset growth. The authors interpret these findings as suggesting risk reduction produced by supervision is not coming at the expense of financial intermediation.

Rhiannon Jerch and Shanjun Li of Cornell University and Matthew Kahn of the University of Southern California find that the private sector provides bus transit service at a lower cost than the public sector, and that the savings are bigger in larger transit systems. Specifically, they find that fully privatizing bus service could lower operating expenses, from about $6.63 per mile to $4.16 per mile, which translates into aggregate cost savings of approximately $5.7 billion per year, or 30 percent of total U.S. bus transit operating costs. Under efficient privatized operations, aggregate ridership would increase from 5.2 billion to approximately 6.2 billion passenger trips a year.

Chart of the week: Core inflation has started to turn higher 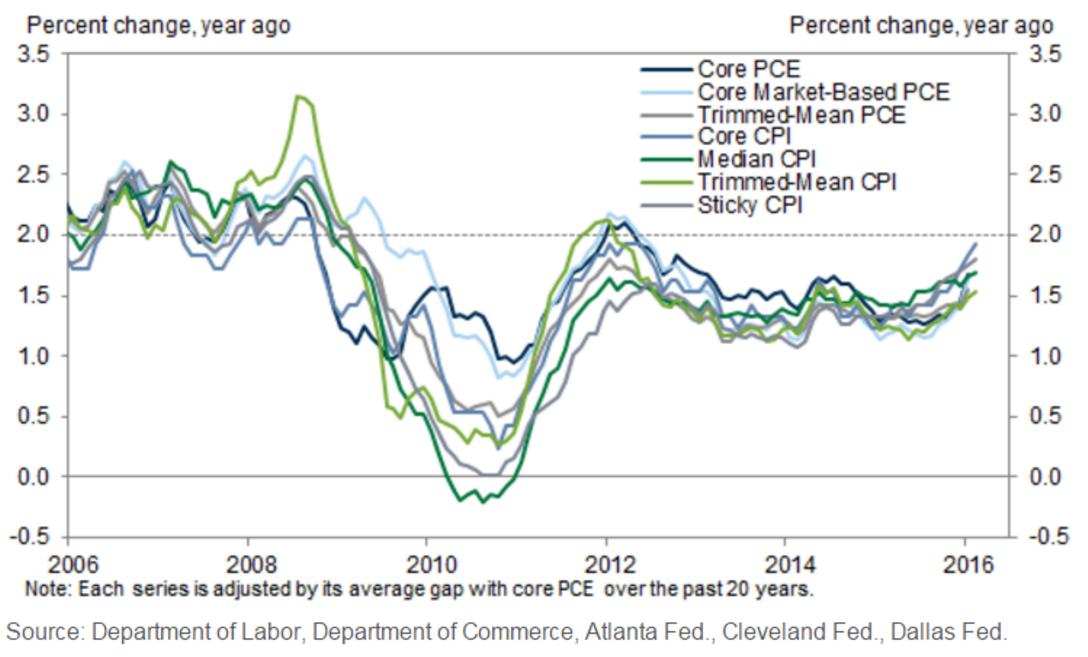 Quote of the week: “Central banks’ action is now called into question: how effective is monetary policy and how effective can it be in the future? Aren’t central banks running out of ammo?” speculates France Central Bank official François Villeroy de Galhau

“Some argue that these challenges [ – deflationary pressures and the risk of an unanchoring of expectations – ] mean that the Eurosystem can no longer achieve its price stability mandate. I don’t think so. Current challenges do not call into question our mandate, but they change the way in which we fulfil it. Some argue that the Eurosystem should rather change its objective. I don’t think so either. For the credibility of monetary policy, this objective must be maintained: this 2% target is a medium-term “anchor”, at a time when there is so much volatility and short-termism affecting the economy. Most central banks in advanced economies share this medium-term 2% objective, including the United States and Japan. This has been the ECB’s objective since 2003, when it was proposed by the German former chief economist, Otmar Issing.”

— François Villeroy de Galhau, Governor of the Bank of France

If you missed our event this week – Are we ready for the next recession? – you can access the slides and video here.