Studies in this week’s Hutchins Roundup find that gradual changes in the policy rate might prove unsuccessful in the long term, shocks to the supply of letters of credit reduce exports, and more.

U.S. would be better off if the Fed cared less about the bond market

Jeremy Stein and Adi Sunderam of Harvard University examine optimal monetary policy in a model in which a central bank cares about bond market volatility and has private information about its own long-run interest-rate target. In such a setting, the central bank adjusts the policy interest rate gradually to avoid spooking the bond market. However, this effort is unsuccessful in equilibrium because investors in long-term bonds rationally react more to moves in short-term rates when the central bank acts slowly. The authors advise the Fed to build a reputation for not caring too much about bond market volatility.

Shocks to the supply of trade finance can constrain exports

Using 15 years of data on bank financing of trade, Friederike Niepmann and Tim Schmidt-Eisenlohr of the Federal Reserve Board show that when exporters can’t obtain letters of credit (financial instruments that reduce the risk that an exporter won’t get paid), a nation exports much less. The impact is especially pronounced in exports to poorer, smaller countries and during times of crisis. A large negative shock to a big U.S. trade-finance bank reduces aggregate exports by 1.4 percentage points.

Chart of the week: China’s private debt has soared 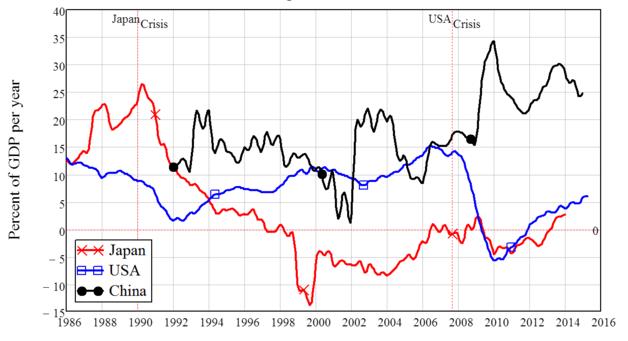 Quote of the week: “Altogether, the banking system is much more resilient today than it was in 2008,” says European Central Bank official Sabine Lautenschläger

“When you listen to some observers, you might get the impression that 2008 is not far away these days. Personally, I would rather argue that it is reasonably far away. In terms of capital ratios as a measure of the resilience of banks, it is actually a couple of percentage points away – since 2008, [banks in the euro area have increased their Tier 1 capital ratios from 8.4% to 13.7%]. After all, it is not just a matter of the amount of capital held by the banks. It is also a question of capital quality. And that, too, improved dramatically as a result of regulatory reforms in 2010 … In addition, the euro area addressed risks in banks’ balance sheets with an unprecedented project in 2014 – the comprehensive assessment. Not only did that exercise lead to a common definition of non-performing loans for the first time, it also led to a significant increase in provisioning.”

— Sabine Lautenschläger, Member of the Executive Board of the ECB and Vice-Chair of the ECB’s Supervisory Board