Few issues are more likely to provoke interest about China—though often of a sensational and ill-informed variety—than its coal use and national statistics. The former evokes images of smog-oppressed cities, vividly highlighting the dangers of heedless industrial growth. The latter prompts cynicism about the reliability of official Chinese accounting, reinforcing preconceptions about a less-than-transparent system of governance. Indeed, both call into the question China’s transparency: one literal, the other metaphorical.

A report by The New York Times on November 3, 2015, which was picked up and elaborated upon by other major outlets, has brought these provocative issues together. It announced that China has been underreporting its coal consumption since 2004 by an average of 17 percent and therefore lowballing its carbon emissions data. The “immense” correction in data, the New York Times concludes, will present heretofore underappreciated challenges to China’s emissions reduction efforts. Add in this year’s Paris climate conference, and we have seen a predictable explosion of controversy and media attention. The Wall Street Journal argued that China “cuts corners on carbon,” while Mother Jones magazine says, “China is spewing out more carbon than we ever imagined.” In the Beltway, the Republican senate leader Mitch McConnell has accused China of “pursuing its own economic self-interest,” all while the United States is forced to make sacrifices in jobs and income.

But for several important but overlooked reasons these anxieties over Beijing’s intentions regarding its statistics may be misplaced. First of all, revisions of initially reported national statistics—dealing with everything from local finance and expenditure to energy use—are common practice in China, as in many other countries. The good news is that China is making serious efforts to correct those statistics as additional information becomes available—and to publish those corrections.

Accounting for coal use and emissions in China

Accounting for coal use and emissions face a particular difficulty in China because of the large number of smaller enterprises. Small-scale operations (i.e., those with annual revenues less than 5 million yuan [roughly $785,000] in 2007 and 20 million yuan [about $3.2 million] in 2011) are often left out of the current accounting system. They have also been negligible producers of carbon emissions—until the past decade, as their numbers have grown and industrialization has picked up speed in previously underdeveloped areas. A similar phenomenon has occurred for rural areas where biomass was a key source of energy, but where coal has since become a major fuel.

Aggregating the quantitative details of a wide range of social activities, many of which are interrelated and interactive, for a country of 1.35 billion people—parceled out first into 31 provinces, municipalities, and autonomous regions, then into two thousands of county-level subdivisions, and then further complicated by other organizational reporting units such as state-owned enterprises—is perforce not an exact science. It is fraught with complexity, and must address myriad fudges and reporting issues.

The above is not to excuse the problems with China’s official statistics; it is merely to point out the fact that national accounting is a challenging endeavor and the current system needs improvement. Beijing recognizes this problem, and China’s recent revisions on coal consumption are an indication that relevant authorities are making an earnest effort to do so—and to update their statistics as better information becomes available. They are certainly not, as has been suggested explicitly or by innuendo in some criticisms, consciously underreporting as a tactic in diplomatic gamesmanship. 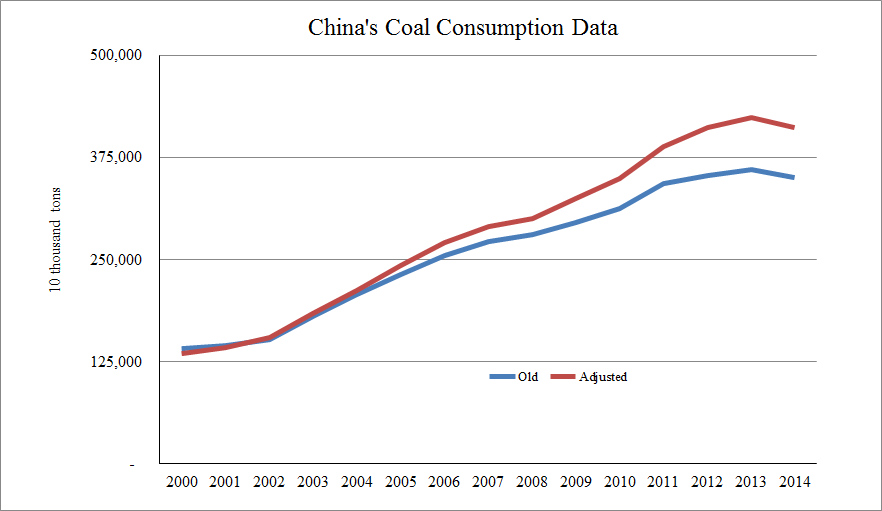 The recent headlines about China’s revised coal consumption figures are also wide of the mark in that they suggest that China’s climate change commitments have not taken the revised figures into account. But in fact these revisions became available at the beginning of 2015, and the updated statistics have been in use by researchers and policymakers, and have already been incorporated in China’s Intended Nationally Determined Contribution (INDC), to be discussed at the Paris climate talks. Therefore, the revisions will not alter China’s policy targets of reaching peak emissions around 2030, while it may make it harder to achieve the target of 20 percent non-fossil fuel in primary energy consumption. The revision of the coal data is not expected to influence either China’s negotiating position at the Paris conference or its commitment to international collaborations on climate change—most notably with the United States.

China’s coal use may have already peaked and even begun to fall. Coal consumption declined by 2.9 percent in 2014, and has continued to contract this year. This is likely the beginning of a long-term trend. China’s economic growth has not only slowed but also changed in structure—the so-called “New Normal” phase of development. Energy use by heavy industries such as iron and steel and cement has already peaked. China’s economy is transitioning into services-led growth, while the energy-intensive exports and construction-driven growth of the previous three decades has lost momentum.

Adding further downward pressure on coal use, the Chinese government has begun to enact major coal use and emissions reduction policies. There are already caps on coal use for 10 provinces, which will serve as the basis of a national limit in the coming years. Addressing climate change is one reason for these new policies; another important motivation is improving air quality, which has become a major source of public discontent and international scrutiny. Beijing’s infamous “airpocalypse” of 2013 drew widespread and—at least from the government’s point of view—unwanted attention. The capital consumed over 26 million tons of coal in 2010, but by 2020 consumption will be reduced to 10 million tons. There are signs that the policies are already paying off. Recent studies show that Beijing’s air quality, while not without its very hazy interludes, has improved significantly since 2013.

Reducing China’s dependency on coal, and accurately accounting for and reporting that reduction, is an important task for the country’s policymakers and researchers. Problems certainly exist in China’s statistics, including on coal consumption—and coal consumption, while declining, will remain a major energy source for the coming decades. But these challenges must be seen in proportion to the improvements that have already been made and in the context of current initiatives and trends. The failure to do so leads to conclusions—whether whispered among negotiators or sensationalized by media outlets—that are neither informative nor instructive for policy purposes.