On October 29, the Center for 21st Century Security and Intelligence welcomed Blue Star Families to Brookings to discuss their 2015 Annual Military Family Lifestyle Survey, an important tool for understanding the issues facing service-members, veterans, and military family members. Joining Michael O’Hanlon onstage was his colleague Elaine Kamarck, founding director of the Center for Effective Public Management, as well as Cristin Orr Shiffer of Blue Star Families, Nicholas Armstrong from the Institute for Veterans and Military Families, and Brad Carson, the acting undersecretary of defense for personnel and readiness.

By taking a comprehensive look at the needs and priorities of military families and service-members, the survey helps point to policies that can sustain and improve the all-volunteer force and their families, all of whom make tremendous sacrifices in service to their nation. Military families are assets to their communities and national defense writ large, but they are frequently overlooked.

Military members and their families are most concerned about pay and benefits. Shiffer noted that, “Under 50 percent of people believe that they would actually be getting their post-retirement benefit.” This is on top of trends showing anxiety over the military lifestyle: not only do the economics sometimes fail to add up, but the way of life can be expensive and frustrating.

Transition from military to civilian life continues to be a particularly difficult process, but things are improving slightly. More than 40 percent of those transitioning or recently transitioned felt stress about the process, highlighting the need to make service-members more aware of the tools and resources available to them, like counselors, transition assistance, and additional education. Armstrong, however, highlighted that of those service-members transitioning, “close to 60 percent noted that they felt prepared for civilian employment … a positive sign that our transition programs are working.”

Civilian employment post-military was also at the top respondents’ concerns. Although a majority of respondents indicated that they felt prepared for civilian employment and 80 percent said they were ready to take on leadership opportunities in their communities, roughly half of veterans indicated that they are not in their desired career field or finding meaning in their involvement, showing the need to better leverage veterans’ skills in the civilian workplace.

In addition, spousal employment is hindered by a variety of military lifestyle factors, including moves across the country and sometimes around the globe. While 45 percent of military spouses have a full or part-time job, 58 percent of those who are not working would like to be employed outside the home. 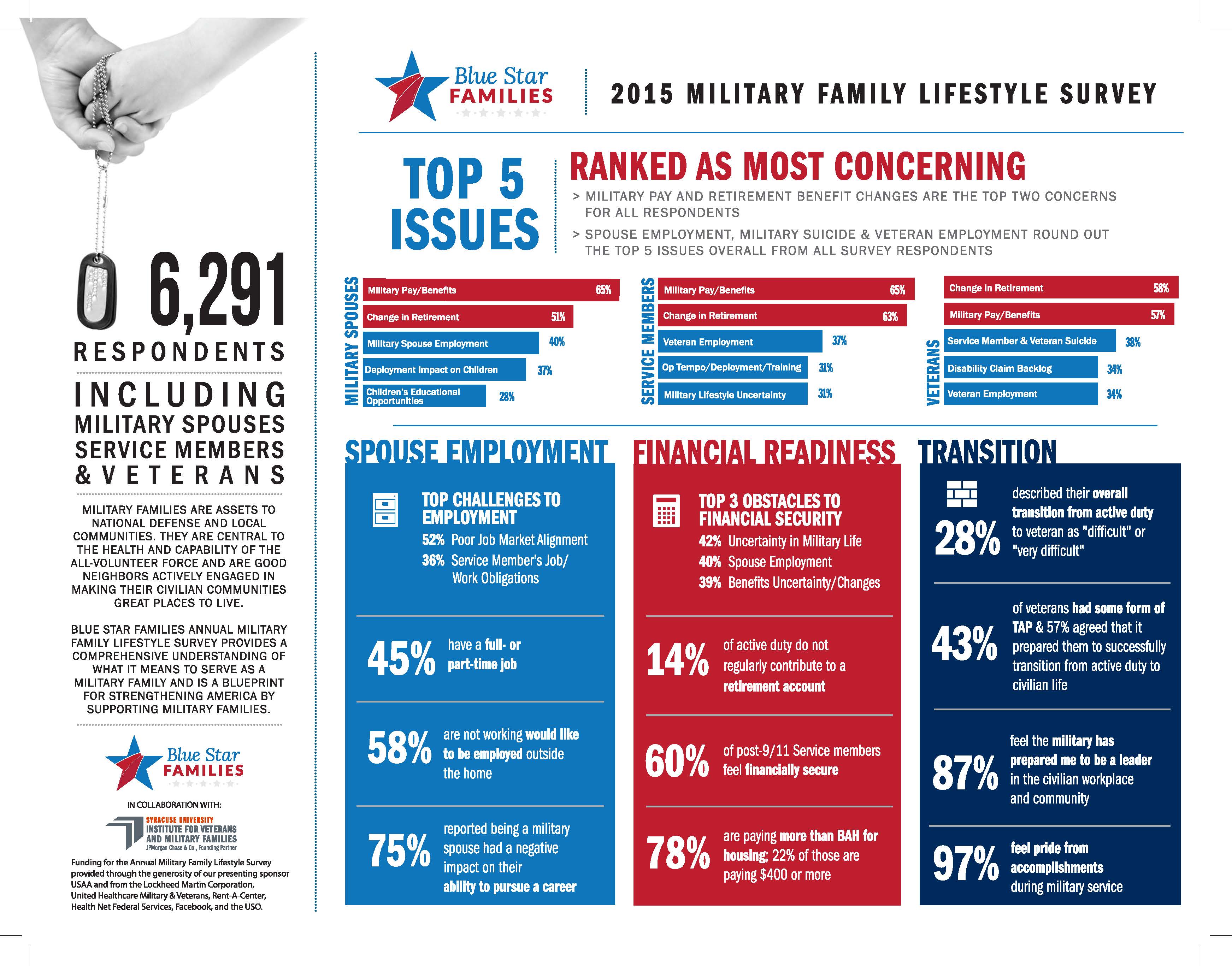 Better communicating with service-members and veterans

The Department of Defense is persistently working to recognize where its programs are wanting, even if it doesn’t have all the solutions. By understanding how the military is changing, it can better anticipate the expectations that military families have.

Carson addressed this need, explaining “It’s very sobering to me about the need to talk better and talk more about what we are trying to do, and learn more from service-members and their families, from retirees, from veterans, about what we can do better to educate them about the many programs that we are working very diligently to executive.” Communicating to the force, even about national budget issues affecting everything from acquisition and readiness to compensation, can assuage the nervousness that promised benefits will not materialize farther down the line.

Learning among the services

The individual services should examine their own best practices and share those with the other branches. Even though each service operates under unique circumstances, each has undertaken experiments and initiatives, such as base consolidation, that could have implications across the military spectrum, particularly for spousal employment and civilian integration.

All veterans, most notably post-9/11 veterans, face general financial volatility and challenging job prospects, but there are major concerns over their mental health care. Many might benefit from changes to the Choice Act, which Michael O’Hanlon said could “tackle waiting lists for veteran’s care … even more aggressively rather than asking people to wait a certain period of time before they the option of going to a private provider.”