Last month, the Hutchins Center on Fiscal and Monetary Policy convened a roundtable at which academic and think tank experts joined past and present Congressional Budget Office and Office of Management Budget staffers to examine CBO’s approach to two particularly contentious scoring issues: Projecting the cost or savings of health reform proposals and putting official price tags on federal credit programs. Budget experts at CBO and OMB disagree about how best to score credit programs such as student loans or mortgage guarantees.

Why is it harder to score credit programs?

For most types of legislation, the budget score is simply the expected changes in annual spending or revenues arising from that legislation over a budget window of 10 years—called traditional cash flow accounting. But when policies have very different effects within the budget window than outside the budget window, this approach may not provide a very useful measure of the real costs or savings associated with a particular policy.

For example, under traditional cash flow accounting, a direct student loan with a 20-year maturity would show a big expense in year 1 when the loan is disbursed that would be only partially offset by interest receipts in years 2 – 10 of the budget window. However, when the loan is paid off, in year 20, much of the initial cost would be recouped. Thus, the cash flows in the 10-year budget window overstate the cost of the loan. On the other hand, an economically equivalent loan guarantee that lets students borrow in the private market would appear to be much less costly during the budget window, as only the costs of the guarantee itself would count, and there would be no big first-year outlays.

So, in cash flow accounting, loans look more expensive than guarantees, even if they’re more or less equivalent in the long run?

Right. So to prevent lawmakers from choosing guarantees over economically-equivalent loans purely for budget scoring purposes, Congress passed the Federal Credit Reform Act of 1990 (FCRA). FCRA requires CBO to score credit programs using the net present value of the expected lifetime costs to the government. Under FCRA, CBO counts all the costs and revenues up front in year one, rather than when the cash is disbursed. FCRA requires that the CBO discount expected future cash flows using the rates on U.S. Treasury securities with similar terms to maturity as the credit programs being discounted.

Why does CBO prefer a different approach?

The CBO argues that FCRA mismeasures the costs of credit programs, because it discounts risky future cash flows by the Treasury rate, which is a risk free rate that is only appropriate for cash flows that are known with certainty. CBO prefers a third method for scoring credit: the Fair Value model.

What is the Fair Value approach?

The Fair Value method places a higher premium on risk than FCRA. Fair Value uses market-based rates for discounting instead of Treasury rates, where the market-based rate depends on the characteristics of the program and the borrower. That is, the fair-value approach uses the interest rate that a borrower would receive in the private market to discount the cash flows. Because market-based rates are typically significantly higher than Treasury rates, this makes credit programs appear more expensive for the government.

So is Fair Value better than FCRA?

Budget experts disagree. Fair Value proponents believe that the best way to measure market risk is to use the interest rates available to borrowers in the private market, but others argue that the private rate overstates the cost of risk because government is better able to smooth consumption losses over time and over future generations than private markets. Another argument is that the budget isn’t the place to account for risk, and budget scores should reflect only the federal government’s actual spending.

This is pretty technical. Why does it matter?

The different methods can produce very different cost estimates, and those cost estimates are an important part of the cost-benefit analysis lawmakers consider when allocating resources. Some programs that appear to make money for taxpayers when FCRA is used can show a net cost to taxpayers under Fair Value. For example, CBO reports that, under FCRA, the government would be reported as saving $135 billion dollars on the student loans made between 2015 and 2024, but would be reported as losing $88 billion under Fair Value scoring. 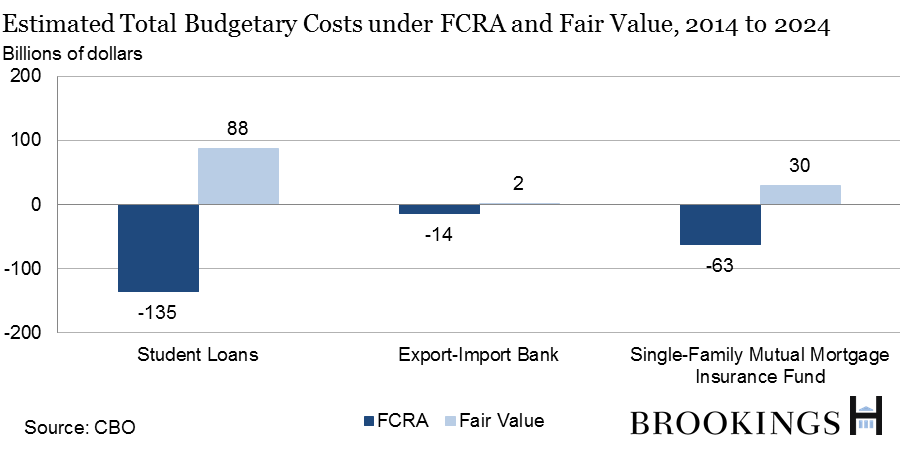 What else do I need to know about credit scoring?

Debates about the best way to score credit programs tend to raise broader questions about the purpose of the budget: If scoring adjusts for risk in credit, shouldn’t it account for risk in other areas? If present values are used for credit programs, should they also be used for pensions and other programs that have similar timing issues? You can see the presentations from the roundtable, and read more about these debates and the details of Fair Value and FCRA accounting in the Hutchins Center’s brief, “Credit Scoring and the Scoring of Risk.”

The economic benefits of immigration