Employment continued to expand at a rapid clip in February, even while government hiring remained subdued (see the latest on Janet Yellen’s Dashboard). Overall, the economy added almost 300,000 new jobs while the unemployment rate dropped to 5.5 percent. Despite continued meager wage gains, the recovery appears to be on solid ground, with over 3.2 million jobs added over the past year.

But hiring by government continues to be remarkably weak (as revealed by the employment charts in our Fiscal Barometer). Although about 15 percent of employed Americans work for the government (about 90 percent at the state and local level), government hiring accounted for only 1 percent of the job gains in February and less than 3 percent over the past year.

Sharp employment losses between 2010 and 2013 have yet to be fully reversed, leaving total government employment in February still 1.5 percent below its pre-recession level, a much slower pace of recovery than in previous recessions (chart). In contrast, private payrolls are now about 3 percent higher than their pre-recession level. 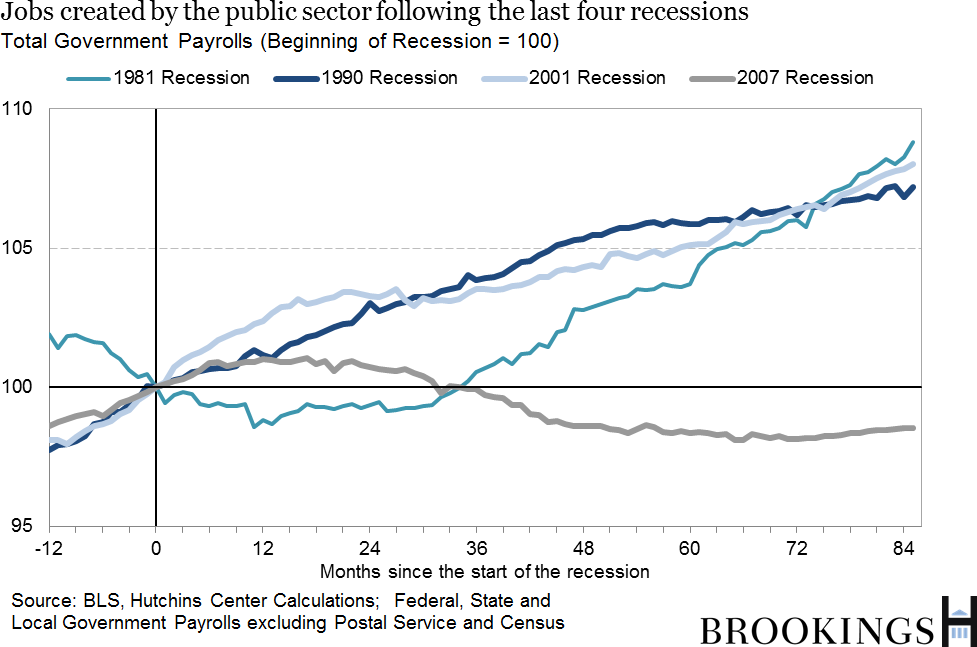 Is this slow pace of government hiring the “new normal” or should we expect an acceleration in public sector employment in the coming year or two? That’s hard to know. On the one hand, budget conditions at the state and local level should continue to improve along with the overall economy, suggesting some potential for an uptick in hiring. On the other hand, political pressures to rein in the size of government and the need to shore up state and local pension funds will likely keep any improvements in the pace of hiring quite modest.

William A. Galston and David Dollar
Tuesday, November 15, 2022
Past Event

Mexico’s priorities for USMCA in 2022