U.S. outward investment is particularly sensitive to property rights and the rule of law, including intellectual property rights protection. U.S. firms are often technology leaders so that protection of trademarks and patents is particularly important. According to the World Governance Indicators, China has poor property rights and rule of law, and the situation has gotten modestly worse over time. Also, China encourages FDI in some sectors (e.g., manufacturing), while prohibiting it in others (financial services, mining, telecom, and media, to name a few). According to an Organization for Economic Co-operation and Development ranking, China is more closed to FDI than other emerging markets such as India or Brazil, and much more closed than the United States (see figure below). China is particularly closed in sectors that are important parts of the U.S. economy. 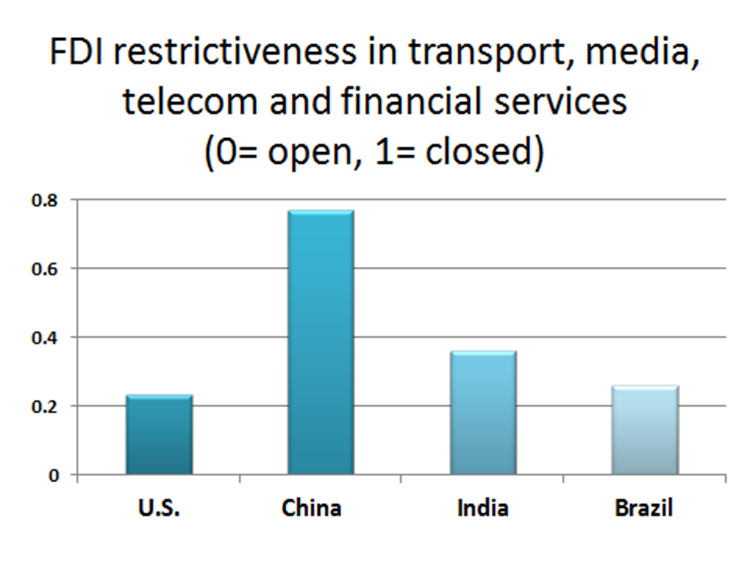 The United States and China have agreed to negotiate a bilateral investment treaty (BIT). This could open the doors to large amounts of investment in both directions if it addresses key issues. For U.S. firms, access to more sectors and better protection of intellectual property rights are crucial. Chinese firms seek a less politicized environment in which to invest. In its Third Plenum resolution, the Communist Party leadership indicated its intention to open more sectors to foreign investment and competition. A BIT could help lock in these necessary reforms and lead to a deepening of economic ties.

The state of Asian trade and trade agreements in 2022

David Dollar and Peter A. Petri
Monday, January 10, 2022
Get daily updates from Brookings