Countries like Chile, Colombia, Mexico and Peru are among the resource-rich economies in Latin America that have made inroads their extractive sectors, particularly regarding transparency in revenues. Others, like Venezuela, that are embroiled in major economic crises illustrate the extent to which a man-made resource curse still takes place today in the continent, while the Petrobras scandal in Brazil starkly reminds us of how persistent and costly corruption and political patronage in these sectors can be.

The Resource Governance Index (which we produce at the Natural Resource Governance Institute) suggested in 2013 that Latin America on average exhibited satisfactory performance in some dimensions of its transparency and accountability in natural resources. Yet there is variation across countries, and even those that are better-performing face obstacles. As seen in the figure below, a particular challenge for the region lies in countries’ relatively weak enabling governance environment, which consists of rule of law, accountability and institutions for the control of corruption, among other elements. As discussed below, progress on these broader institutional reforms are key to complementing and translating transparency initiatives into the effective governance of natural resources. 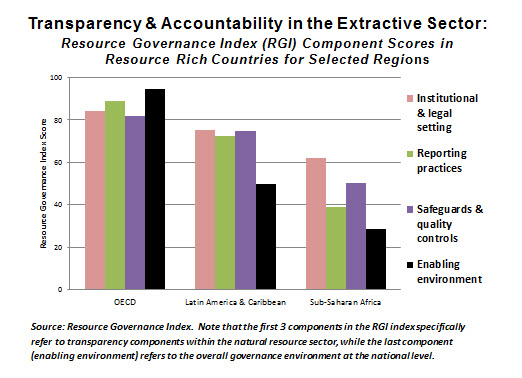 
Some governments in Latin America tend to treat their natural resources as if they will last forever—even though they are finite and non-renewable. Thus, optimizing for the longer term is not akin to maximizing in the short term: The optimal rate of resource extraction should not be confused with attempts to maximize the rate of extraction in the short term, which can, at times, be counterproductive in the medium and longer terms.

Thus, Latin American governments should shift their focus away from solely short-term considerations. Instead, countries should conduct economic, environmental and social cost-benefit analyses on current and potential resource extraction efforts and use these analyses to inform decisions on whether to extract, and, if so, at what pace and by whom, as well as ensure sustainability.

The recent fall in commodity prices is a reminder of the need to move away from the tendency of some governments to treat resource price increases as permanent, while regarding their falls as temporary. This tendency perpetuates an excessive economic dependency on natural resources, conspiring against the need for countries to implement structural reforms to have more diversified economies.

In times of significantly reduced budgetary revenues from natural resources, as is currently the case, it is also timely to strengthen the countries’ public finance institutions. Too often revenue mobilization from general taxation is plagued by loopholes, exemptions, tax avoidance and evasion, while waste and inefficiency in public expenditures remain prevalent, both at national and subnational levels.

Politics often conspire against addressing these public finance failings in times of bounty; it is during leaner times such as now that the political opportunity to tackle these issues arises, with potentially large payoffs in the medium and longer terms for a country’s economy, its institutions, and, above all, its citizens.  Now is the time for politicians and policymakers to seriously consider such reforms, which also ought to aim at redressing the high level of income inequality that still persists on the continent.

Furthermore, the very large price fluctuations in commodities in recent times and the dramatic economic and governance woes of countries like Venezuela are wake-up calls for addressing the challenge of price and financial volatility via robust macroeconomic management in general and the effective use of stabilization funds in particular.

Second, increase the efficiency and integrity of state-owned enterprises (SOEs).


Latin American governments must ensure that SOEs in natural resources are managed with integrity and efficiency and are subject to market rigor. A number of SOEs in Latin America (and in some other regions) tend to be inefficient, politicized and wanting for integrity. Furthermore, their dominance of the sector—and preferential treatment by governments— often stymie competition and investment.

The ongoing corruption scandal engulfing Brazil’s Petrobras is a reminder of the case for integrity of SOE executives and politicians, and presents an opportunity to implement major organizational and regulatory reforms, starting with the de-politicization of the company in general, and in the way high-level appointments are made in particular. Similarly, Venezuela’s state-owned Petróleos de Venezuela, S.A (PDVSA) demonstrates the overall damage that the politically induced mismanagement of a state-owned enterprise can inflict on the economy.

It doesn’t have to be that way: Chile’s Codelco and, to an extent, Colombia’s Ecopetrol illustrate that such enterprises can be managed relatively well. And Pemex in Mexico serves nowadays as an interesting case study, as it is currently undergoing a revamp, even though the outcomes are not yet certain.


Latin American countries must strengthen and ensure the independence and effective multi-stakeholder participation of domestic actors as well as further engagement in international initiatives in order to redouble efforts to enhance transparency, accountability and the fight against corruption.

On the domestic front, one priority for governments is to make regulatory agencies more independent, shielding them from the considerable political influence that they currently face.  Brazil’s Agencia Nacional de Petróleo has been weak in overseeing Petrobras, and Venezuela’s PDVSA lacks any semblance of independence, reporting directly to the executive.

Enforcement of effective environmental regulations is also important: Governments must strengthen environmental ministries and agencies to ensure compliance with environmental standards in the extraction of natural resources (including creating environmental impact assessments, addressing specific challenges such as water scarcity and pollution issues in mining projects, etc.).

Furthermore, governments and companies must do more to protect the rights of indigenous populations. Social tensions and delays often arise because of a failure to include the views of indigenous populations in effective consultation and consensus-building, as has happened in Peru. Generally, more emphasis is needed in strengthening subnational governments, as they have the most proximate mandates over the territories where extraction actually takes place.

More broadly, countries in the region must also ensure that their legislatures are not mere rubber-stamp institutions, but that they serve as effective mechanisms to ensure accountability in the extractives sector. Mexico, Colombia and Chile have made significant strides on this front, while others such as Bolivia, Venezuela, Ecuador and Peru still face a long road ahead.

Similarly, controlling corruption continues to be a challenge in most countries on the continent, and particularly in resource-rich countries. Yet there is variation in this dimension as well, illustrated by the contrasting extremes of Chile and Venezuela (Figure 2). The implementation of judiciary and legal reforms is still pending in many countries in the region and so in the meantime impunity still prevails. 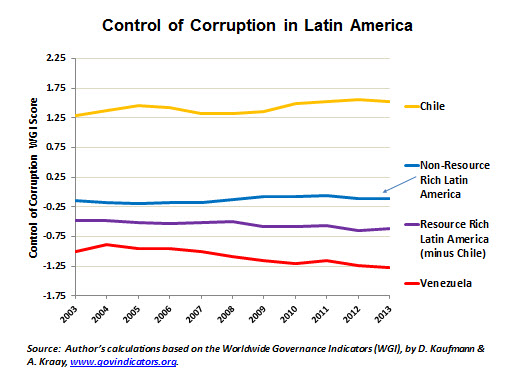 On the international front, transparency and accountability initiatives in natural resources—such as the global transparency standard for improving governance of natural resources, the Extractive Industries Transparency Initiative (EITI)—offer an opportunity to commit to further reforms and share relevant experience and know-how across the globe. Latin American countries have been slow to join this initiative, with Peru the only longstanding member in the region.

Encouragingly, though, that has recently started to change: Guatemala and Trinidad and Tobago have become compliant member countries, while Colombia and Honduras are now officially candidate countries. Mexico is also seriously considering joining the initiative, while discussions about it are taking place in Chile and the Dominican Republic.

The case for governance reforms supporting improved management of natural resources in Latin America is rather strong.  The timing could not be better, given the pressures brought to bear by the major fall in commodity prices faced by all resource-rich countries on the continent, combined with the need to draw urgent lessons from the ongoing crises for a whole country—Venezuela—and for the mighty state company in Brazil—Petrobras. There is an opportunity to implement structural reforms for the medium term. I focused on institutions and policies that deserve particular focus in the areas of accountability, anti-corruption and public finances, at the national and subnational levels.

At the same time, some circumspection about recommending “optimal solutions” for these challenges is in order. Admittedly, over the years, with more focus on gathering and analyzing data, and with better-honed diagnostic tools, progress has taken place in diagnosing and even quantitatively benchmarking the challenges and achievements in natural resource governance. Among others, tools like the Natural Resource Charter illustrate this diagnostic progress.

But better diagnostics and data does not necessarily mean that an optimal policy reform package is always self-evident. In part, this is because appropriate recommendations ought to be context specific. Countries afflicted by systemic corruption and elite capture will require different approaches than others. Customized and homegrown approaches (albeit grounded on common principles) are also required for larger countries, where the subnational dimension is essential, or in countries with weaker implementation capacity, where strategies need to be less institutionally demanding.  More generally, the toolkit of traditional policy instruments may not suffice to address the complex challenges faced today. There is no “one-size-fits-all” set of recommendations.  Acknowledging this should inspire us to further engage in more analysis and learning from one another.

Still, it is clear is that standalone and partial transparency initiatives in natural resources will not suffice. The time is now to traverse to deeper institutional change, one where all key stakeholders—governments, parliaments, broad-based civil society and the private sector—collectively strive to engage and help carry out a governance reform compact.

on governance in extractive industries held in Santiago, Chile, hosted by the Economic Commission for Latin America and the Caribbean (ECLAC), which last year proposed a

for equality and sustainable development. For this article, the valuable inputs of Carlos Monge and Humberto Campod
ónico are acknowledged.

Transparency in Natural Resources: Why is the U.S. Playing Catch Up?
»

How Warm Was Latin America’s Welcome for Ahmadinejad? Misgovernance in One Chart »

To see the event on these issues:

Global health financing after COVID-19 and the new Pandemic Fund