Using weekly data from Chile, Colombia, and Mexico between January 2000 and June 2008, Sebastian Edwards of UCLA finds that even in countries with floating exchange rates, Federal Reserve interest rate changes tend to be imported to a greater degree than theory would suggest. Over this timeframe, Chile, Colombia and Mexico imported 74%, 50%, and 33% of the Federal Reserve’s interest rate changes, respectively.

Chart of the week: Healthcare expenditures account for 1/3 of the projected growth in outlays between 2015 and 2025 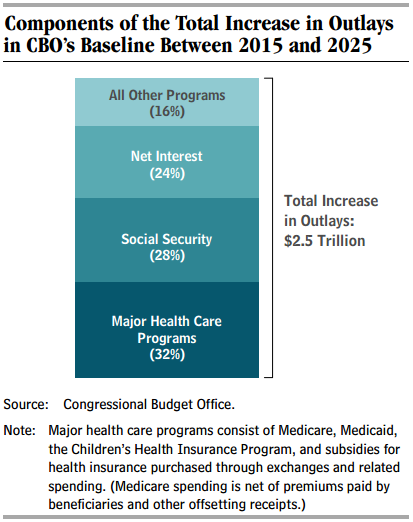 Quote of the week: European debt negotiations with Greece will be a “two-way challenge”

So, the Greek people have handed a huge victory to Alexis Tsipras, who has promised them an end to austerity and social suffering. Will Greece’s €320 billion debt be waived?

“I think this is a two-way challenge. There is a dual responsibility. Europe must show that it can adapt to a change in government, even a radical one, in a Member State. This is Europe’s democratic responsibility. Equally, Mr. Tsipras must comply with the rules of the European game.

“So what does this mean for the debt? It will be discussed, but let me remind you that the €40 billion that Greece owes to France is not owed to speculators or the financial markets: it is owed to the French taxpayers. Cancelling this debt would be giving a gift of €40 billion to Greece. Any restructuring of the debt must be meaningful. It must allow Greece to overcome this situation while continuing with reforms.”