The Dodd-Frank Wall Street Reform and Consumer Protection Act made the financial system safer, stronger and less prone to a repeat of the 2007-09 crisis, but the law could be tweaked to make it better, say Brookings’ Martin Baily and Aaron David Klein, director of the financial regulatory reform initiative at the Bipartisan Policy Center.

Baily and Klein, in a presentation at a University of Michigan conference, “Financial Reform: Preventing the Next Crisis,” divide Dodd-Frank’s provisions into five categories:

Figure 1 below summarizes their analysis. They say, for instance, that the increase in bank capital and the new rules for the government to take off big failing financial institutions are “clear wins” while restrictions on Federal Reserve lending and on the Federal Deposit Insurance Corporation’s ability to guarantee bank liabilities in a crisis are “clear losses.” 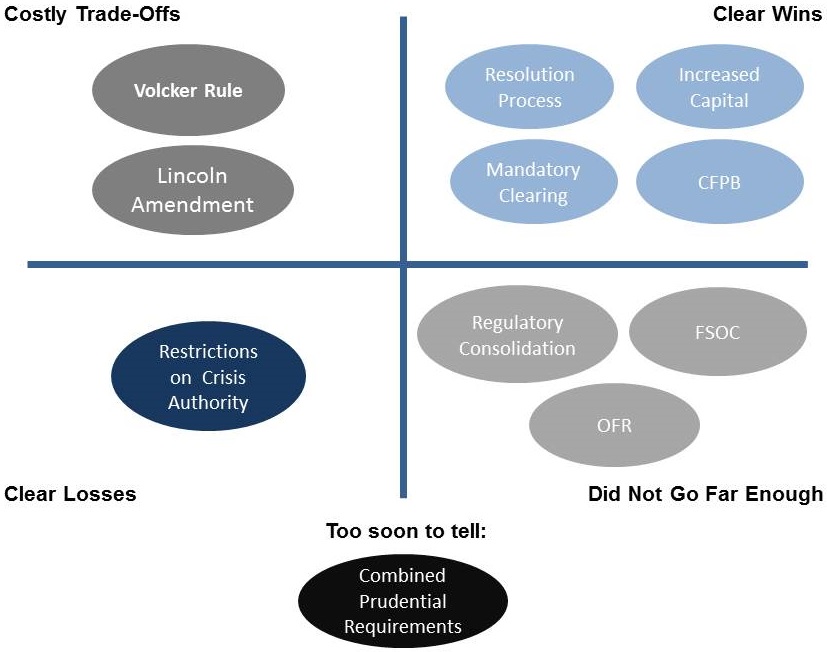 A more detailed version of their presentation is available here.

“Most major pieces of legislation are followed by a corrections bill,” Baily and Klein said. “But with Dodd-Frank, political gridlock has made it extraordinarily hard to get anything accomplished.”


The presentation stems from work the two did in a Bipartisan Policy Center’s Financial Reform Initiative.

African governments are turning to cryptocurrencies but can they team up?

The role of cryptocurrencies in sub-Saharan Africa