What’s happening in fiscal and monetary policy right now? The Hutchins Roundup is a new feature from the Hutchins Center on Fiscal and Monetary Policy to help keep you informed on the latest research, charts, and speeches. Sign up to have the Hutchins Roundup delivered to your inbox, or email us with your suggestions for items to include in the next Roundup.

In a new paper for this week’s Brookings Panel on Economic Activity (BPEA), Hutchins’ own Louise Sheiner finds that geographic variation in health care spending can largely be accounted for by underlying health characteristics of states. This finding is counter to one suggested by researchers at Dartmouth and elsewhere that attributes the variation in spending to differences in efficiency or quality. Sheiner’s paper is one of six new BPEA papers now available on the Brookings website.

Regis Barnichon of the Universitat Pompeu Fabra and Andrew Figura of the Federal Reserve Board find that over the past 35 years emergency and extended unemployment benefits have had only a small impact on the unemployment and participation rates in the United States. According to their findings, extended benefits increased the unemployment rate by only one-third of a percentage point during the Great Recession and had next to no impact on the participation rate.

Using data collected from businesses in a survey conducted in conjunction with gathering anecdotes for the Federal Reserve’s Beige Book, the Federal Reserve Bank of Chicago has constructed an index to illuminate current and future economic conditions—particularly at the regional level.

In the aftermath of the Great Recession, Americans are more pessimistic about the future. 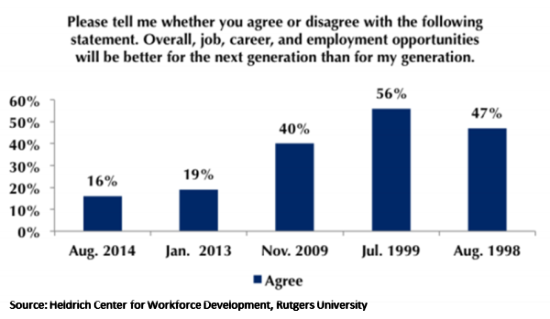 Quote of the Week: Wholesale short-term funding remains a risk