Here is one of the most alarming signs that the U.S. economy is still far from healthy:  More than one in six men between 25 and 54 years old – the prime working years – aren’t working. That’s 10.4 million men, more than double the population of the city of Los Angeles.

Some of them are looking for jobs. Two-thirds say they aren’t.  Some are supported by families or friends; men without jobs are far less likely to be married than men with jobs.  About 2 million of these prime-age men are on Social Security Disability Insurance. 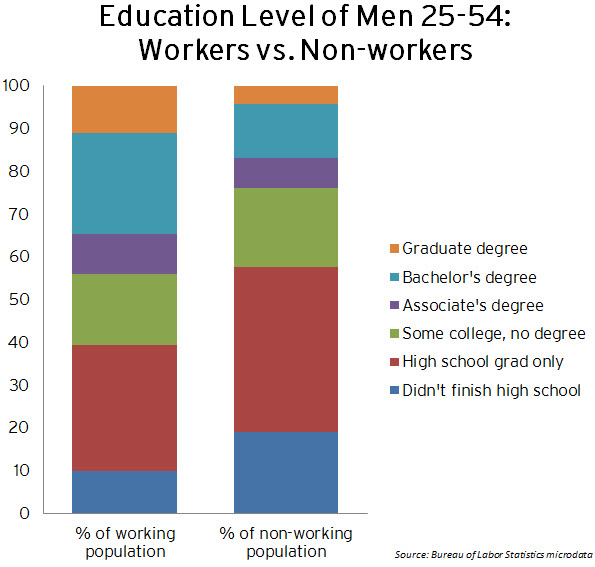 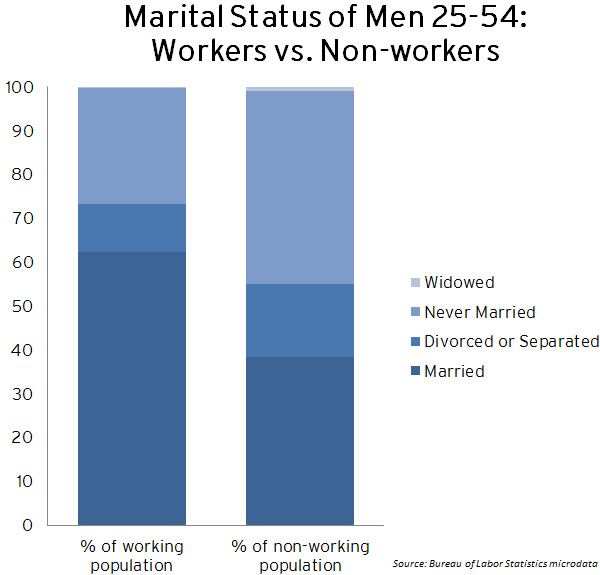 This is both an acute and a chronic problem, as Mark Peters and I write in The Wall Street Journal.

It is an obvious symptom of an economy that has been painfully slow to recover from the Great Recession. It is also the continuation of a trend away from work that predates the recession, one likely to persist even after the economy finally regains its vigor – a point the Congressional Budget Office made this week.

The costs of having so many prime age men on the sidelines of the economy can be measured in lost wages, the rising tab for government benefits, foreclosures and bankruptcies. But the costs go beyond dollars and cents. As my Brookings colleague Ron Haskins has noted, the decline in the share of men who are working may be one reason behind the fall in marriage rates. Men without jobs don’t make very attractive mates.

So why is this happening? And what can be done about it?

“The deep puzzle is why the once-humming U.S. job machine has experienced such deep and persistent engine problems,” Brookings scholar Gary Burtless observed recently. “It’s easy to forget that the United States once viewed itself, and was viewed by others, as the home of the ‘employment miracle.’ Notwithstanding severe recessions in the mid-1970s and early 1980s, employment always came roaring back. After each downturn, the adult employment rate reached new peaks in the ensuing recovery.”

There’s more than one explanation, but a big factor is that – partly due to globalization and technology – the wages of less-skilled, less-educated men have been falling. Simply put, that makes them less willing to get off the couch, particularly if finding a job demands running a gauntlet of on-line applications or requires a move or a long commute or surrendering government benefits.

The surest way to put the most employable of these men back to work would be a stronger economy in which jobs were more plentiful and employers couldn’t be so picky about filling openings. Economists’ research suggests that higher wages, particularly for low-end jobs, would lure more men off the sidelines. For some, that fuels the case for case boosting the minimum wage or enlarging the cash bonus the government offers low-wage workers through its Earned Income Tax Credit, a notion that appeals to some Republicans as well as Democrats. Alan Krueger, a Princeton economist and former Obama adviser, found that the jobless in New Jersey who volunteered while out of work spent more time looking for jobs. “Volunteering is a way to help the unemployed re-engage in society. It’s a way to help them get skills and make connections,” he says.

There’s a lively debate about whether curbing or re-designing unemployment benefits would push more prime-age men to take jobs, even unappealing ones. In general, it probably would. But with jobs as scarce as they are today, the bulk of the evidence suggests unemployment benefits aren’t a major factor in depressing the number of men who have jobs. Harvard’s Lawrence Katz argues that collecting unemployment compensation helps individuals consider themselves as men who’ll go back to work someday, as opposed to being retired or permanently out of the job market.

There’s a broader consensus for rethinking disability benefits, mostly aimed at keeping workers with disabilities on the job as long as possible and to encourage those who can leave the disability rolls to do so. One plan would expand private disability insurance that would cover the first couple years of disability with incentives to get a beneficiary back to work, and preserve the Social Security program for those unable to work after that. Others would provide wage subsidies and vocational aid to disabled workers tempted to leave the workforce. “The payoff to keeping a potential SSDI applicant in the workforce is very high,” says Mark Duggan, a Wharton economist. He estimates the average cost, in today’s dollars, of a disability award and related Medicare benefits is about $270,000. (See a recent Hamilton Project paper for more on proposals to reform SSDI)

Charles Murray, the libertarian political scientist at the American Enterprise Institute, says treating the epidemic of idleness requires a broader change in the culture. “You can’t praise the people who do work unless you stigmatize those who don’t,” he says. “We need to celebrate the value of having a job and earning your own way and say, ‘This is part of being a man.’”