An extension of federal unemployment insurance (UI) was omitted from the budget deal recently worked out between Congressional leaders. With both the House and Senate now adjourned for the holidays, 1.3 million Americans will immediately lose their UI benefits on December 28th, with an additional 3.6 million jobless workers losing benefits over the next 12 months.

The extended UI benefits, which were originally enacted during the Great Recession, were designed to provide the long-term unemployed with additional benefits if they are unable to find a job. Unemployment insurance continues to play a crucial role for many American families; in 2013, the average job finding rate was still 30 percent lower than the average from 1990-2007, prior to the Great Recession. Further, today there are still nearly three unemployed workers per job opening—roughly twice the competition faced before the recession.

The issue of whether to extend unemployment benefits will re-emerge in early 2014. Advocates of an extension of UI benefits point out that these benefits accrue to unemployed workers and their families. The benefits help these individuals put food on the table and pay the rent at a time of extraordinary economic weakness. In doing so, these benefits serve in part to boost the economy as a whole as UI recipients maintain consumption. Skeptics of an extension point to both the monetary costs to government, but also to the potential costs of “enabling” UI recipients to spend less time and effort searching for work.

In this month’s employment analysis, The Hamilton Project reexamines unemployment insurance. Our analysis highlights evidence suggesting that extended benefits provide a sizable boost for workers and the economy, but have little negative effect on unemployment duration—especially when the labor market is weak.

The Value of UI for Individuals and the Economy

First and foremost, UI benefits help individuals and families by assisting them through unemployment spells without a dramatic drop in spending. Research by Jonathan Gruber of MIT shows that individual consumption for those receiving UI benefits falls only one-third as much as it would have in the absence of the program. In other words, unemployed workers can still meet basic needs and avoid cutting back drastically on expenses during a temporary period without work.

The gains go beyond the families of those directly receiving benefits. According to the Congressional Budget Office, each dollar of UI benefits raises aggregate economic activity by $1.10, and each million dollars of UI benefits increases employment by six jobs. The reason that there is such a large effect is that families on UI rely on it to maintain necessary spending, thus the money tends to be rapidly spent rather than saved.

Concerns About the Impact of UI Benefits on Rates of Reemployment

The strongest opponents of unemployment insurance claim it creates a disincentive for UI beneficiaries to quickly seek reemployment. However, economic evidence suggests that any diminished work incentive is modest in normal economic times, and is particularly low during periods of high unemployment. For instance, recent research has shown that few workers actually wait until benefits run out to find a job ( Card and Levine 2000; Card, Chetty and Weber 2007), and that the job search process is ongoing.

The extent to which UI benefits dampen job search effort depends on institutional context and labor market conditions. How people respond to unemployment benefits when the economy is strong—in terms of their aggressiveness in searching for a job—does not necessarily tell us what to expect during weak labor markets. What is arguably the most compelling evidence on the re-employment effects of UI benefits during the Great Recession suggests that any impacts of benefits on the length of unemployment have been quite small. Rothstein (2011) finds that extended benefits may have increased the unemployment rate in early 2011 by only about 0.1 to 0.5 percentage points, with at least half of this effect coming from the reduced exit from the labor force, rather than to reductions in reemployment rates. (In contrast, a new working paper finds substantially larger impacts.)

The Unique Importance of UI for Today’s Unemployed Workers

Today’s labor market provides the strongest case for extending UI benefits. It has always been harder to find work the longer you are unemployed, but the situation facing today’s workers is exceptional. No matter how long a worker has been unemployed, the odds that they find a job are far lower than before the Great Recession. Furthermore, the odds of experiencing long-term unemployment are highly related to losing a job in a particularly hard-hit industry, like construction or manufacturing, and are disproportionately concentrated in certain distressed states.

Figure 1 below shows the likelihood of finding a job as measured in the monthly Current Population Survey data. The chart shows the probability of leaving unemployment for employment in each month. These rates are at exceptionally low levels. The odds that an unemployed worker found a job each month fell from 28 percent in 2007 to an average of 16 percent during the last three months of 2009. In 2013, the average job finding rate was still 30 percent lower than the average from 1990-2007. 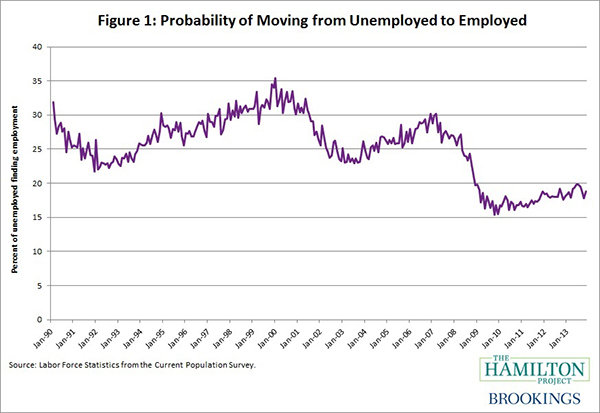 Why is the job-finding rate so low? The basic reason is that job openings remain depressed and there are a lot of unemployed workers competing for those jobs. The number of job openings fell by more than 40 percent between 2007 and 2009 and is almost 15 percent lower between 2007 and 2013. As a result, the number of unemployed workers per job vacancy surged, as Figure 2 illustrates. 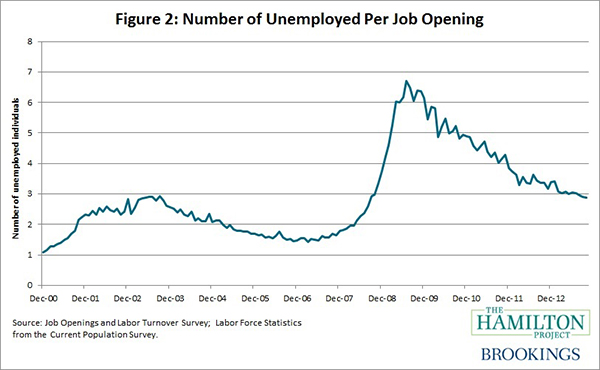 In 2007, there were 1.6 unemployed workers for each job vacancy; that ratio increased to nearly 6.7 unemployed persons per job opening at the peak of the crisis. At the end of 2013, there are still nearly three unemployed workers per job, roughly twice the pre-recession level.

The economic gains from extending UI benefits are significant. UI benefits help families through periods of financial stress as well as providing some of the greatest “bang-for-the-buck” in terms of the impact of government spending on the economy. Moreover, the empirical evidence suggests that the potential costs of reduced job search activity are likely quite modest and the slow economic recovery and the high ratio of unemployed workers to job openings are the central cause of lengthy durations of unemployment.