Last year was a particularly bad year in terms of natural disasters for developed countries, with widespread flooding in Australia, a terrible earthquake in Christchurch, the Japanese earthquake/tsunami/nuclear accident, and finally a string of floods, tornadoes and wildfires in the United States. Our review of natural disasters in 2011, published this week and launching on Wednesday, focuses on the experiences of developed countries, drawing out some of the particular characteristics of disaster response and recovery which they experience. We also review global disaster statistics, highlighting some of the difficulties in estimating the economic costs of disasters. A chapter in the review is devoted to looking at Somalia where a deadly combination of a natural hazard — drought — and conflict led to famine. Even though the drought was equally intense in other countries in East Africa, causing serious hardship and pain for hundreds of communities, it was only in Somalia that famine was declared. Finally, we focus on the impact of natural disasters on one particular group of affected people — the elderly. As populations globally become older, the number of elderly people affected by disasters will increase. So far their particular needs and resources have barely been considered by the humanitarian community.

In comparison with the previous decade, the number of disasters and the number of people affected by disasters in 2011 were both below average. But 2011 was the most expensive year in history in terms of disaster losses — primarily because of the $210 billion loss experienced by Japan. While natural disasters result in higher economic losses in rich countries, fewer people tend to be affected and loss of life is less than in developing countries. Although developed countries are generally better-prepared to withstand and recover from natural hazards, they still face many of the same challenges as developing countries, including responding to international offers of assistance in the immediate aftermath of disasters and incorporating disaster risk reduction into long-term recovery efforts. Once again, our review demonstrates that media coverage tends to drive humanitarian funding with almost half of humanitarian disaster funding in 2011 going to Japan (where it made up only about a third of one percent of the total economic cost of the disaster).

The declaration of famine in Somalia in July 2011 marked the first time in twenty years that the United Nations determined that conditions warranted the use of the word famine. While the warning signs were evident a year or so before famine was declared, the continuing conflict in Somalia and particularly the lack of humanitarian access to affected communities meant that preventive action wasn’t taken in time to prevent tens of thousands of deaths. The ability to prevent and respond to disasters requires access to communities at risk. The sad case of Somalia also demonstrates how armed groups not only kill civilians outright with weapons but also kill them by restricting the ability of humanitarian agencies to provide aid to prevent drought becoming famine.

In disasters such as the earthquake/tsunami in Japan and Hurricane Katrina, older people made up a disproportionate percentage of casualties. But this is not just an issue for developed countries with global trends demonstrating an aging population worldwide. Among tsunami-displaced persons in Aceh, Indonesia after the 2004 Indian Ocean tsunami, the highest death rates were among people aged over 60. Older people are often ‘invisible’ in emergencies, sometimes because limited mobility keeps them out of public sight, but often because aid agencies don’t collect data on the basis of age or because they simply haven’t considered the particular needs of older populations. Finally, older people — like women, children and persons with disabilities — not only have particular vulnerabilities in emergencies, but bring specific resources which can be an asset in preventing, preparing for and responding to natural hazards. These resources, such as knowledge of the environment and the community, can and should be more effectively used.

While there have been no mega-disasters so far in 2012 on a par with last year’s Japanese earthquake or Somalia’s famine, the drought in Mali, coupled with political conflict, is displacing hundreds of thousands of people. Hopefully the international community will have learned some of the lessons from Somalia – particularly the need for early action to keep drought from turning into famine.

Global trends are clear that disasters are increasing in both severity and frequency. We hope that our review of last year’s disasters will lead to more effective ways for preventing, preparing for, responding to and recovering from disasters. 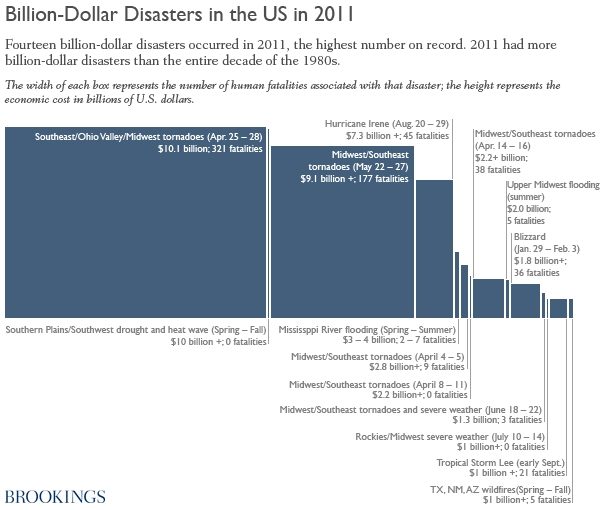