Mahmoud Ahmadinejad’s visit to Latin America has received wide coverage. Much is being written about the fact that the president of Iran, who has increasingly been isolated by much of the world, can count on a warm welcome in Latin America. The visit has provided him with excellent photo-ops embracing the region’s leaders, thereby stinging the United States.

It is however misleading to speak of Latin America as a single entity. The bottom line is that Iran’s Ahmadinejad has been welcomed in just four countries. And the four welcoming countries exhibit very low levels of governance, not unlike Iran.


Take for instance “Voice & Democratic Accountability” (VA), one of the six dimensions we measure in the Worldwide Governance Indicators (WGI), which captures the extent to which political rights and civil liberties are provided, as well as freedom of association, of expression and of the press. 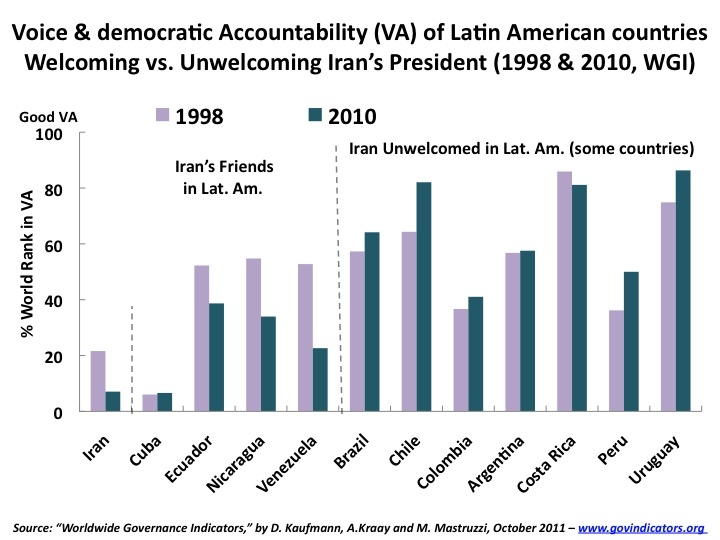 The chart above first shows how low Iran ranks globally in Voice & Accountability. Only about a dozen countries rate below Iran from over 200 around the world. The chart also shows that governance in Iran has deteriorated markedly since 1998.


To the right of Iran are the Voice & Accountability percentile ranks in 1998 and 2010 for the four Latin American countries that have welcomed Iran’s leader (Cuba, Ecuador, Nicaragua and Venezuela). The performance of these four countries mirrors that of Iran in terms of democratic governance – deteriorating over the past dozen years, and very low nowadays.


The WGI also shows that the performance of these four Latin American countries is subpar on other dimensions of governance, such as rule of law (not shown in the chart, but full data are available here for over 200 countries and for all six governance indicators).


We clearly see that the many countries in Latin American that have not welcomed Ahmadinejad exhibit much higher levels of democratic governance and have generally seen improvements in governance over the past dozen years (or at the very least not deteriorations). The data clearly show a stark contrast between the welcoming and unwelcoming countries in Latin America. On the one hand, the few bedfellows of Iran all govern poorly. This is not surprising since they are bankrolled by the leader of one country, Venezuela. On the other hand are many prominent Latin American countries that govern better.


Ahmadinejad was not warmly welcomed and embraced by Latin America, but by Venezuela’s Chavez and a few of his clients. This, at least, is what emerges from the evidence-based perspective provided by the Worldwide Governance Indicators.

There’s a real sense the U.S.-Latin American relationship had been a bit distant and now has new possibilities. The one thing that could spoil that is the situation in Venezuela, so the administration is looking for ways to manage that.

Brookings scholars weigh in on impacts of falling oil prices