The U.S. Department of the Treasury and the Department of Housing and Urban Development Wednesday released March data for the Obama administration’s Home Affordable Modification Program (HAMP). HAMP is the foreclosure prevention program targeted at borrowers who are delinquent in their mortgage payment or facing imminent risk of default on their mortgage.

In order to be eligible, the property must be a primary residence, the mortgage must have been originated on or before January 1, 2009, and the unpaid principal balance on the mortgage must be no greater than $729,750. Also, the debt-to-income ratio for the first mortgage for the borrower must be greater than 31 percent of pretax income.

For eligible borrowers, the mortgage servicer will take steps to adjust the debt-to-income ratio for the first mortgage down to 31 percent of pretax income. The steps include first reducing the interest rate to as low as 2 percent, then extending the loan term to 40 years and, finally—if  necessary—deferring a portion of the principal, interest-free, until the loan is paid off. The borrower is given this modification for a three-month trial period, and the modification becomes final after the borrower makes all three trial period payments on time. 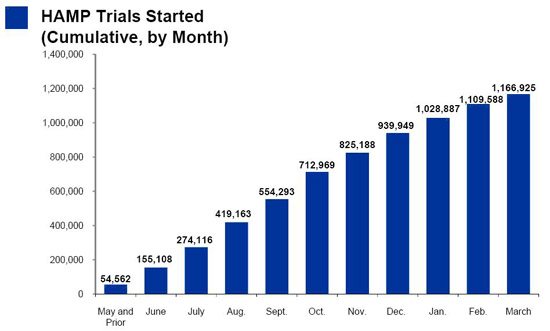 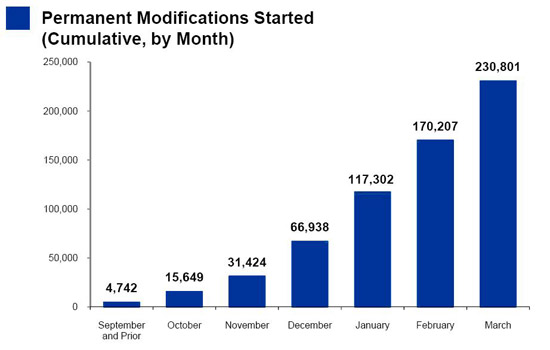 A key policy question is whether HAMP is just delaying inevitable foreclosures. A HAMP modification will indeed reduce monthly payments, thus making a mortgage more affordable. But a reduced payment may not be enough incentive for someone who has a principal balance far greater than the market value of the house. According to First American CoreLogic, about 24 percent of residential properties with mortgages had negative equity—that is, mortgage loan balances greater than the value of the house—at the end of 2009. Indeed, the latest HAMP report shows some signs that even those who qualify for the permanent modifications might wind up re-defaulting on their loans. Over 2,800 of these loans have been ended since the program began, and the rate of these re-defaults seems to be increasing.

The Calculated Risk blog points to an alarming statistic from the HAMP report. As shown in the table below, the median borrower who received a permanent modification had a back-end debt-to-income ratio of 77.5 percent before the modification. (The “back-end” ratio includes all mortgage principal and interest payments – including from second mortgages – plus such things as property taxes, homeowner insurance, and condo fees.) Even after receiving the modification, this ratio drops only to 61.3 percent, which is still a large burden to sustain (especially if the value of the house is far below the loan balances), and could continue to lead to more foreclosures, delayed but not prevented by HAMP.