Jeff Bezos and the Walmart heirs have grown $116 billion richer during the pandemic—35 times the total hazard pay given to more than 2.5 million Amazon and Walmart workers.

The COVID-19 pandemic has generated record profits for America’s biggest companies, as well as immense wealth for their founders and largest shareholders—but next to nothing for workers. In a report published last month, we found that many of America’s top retail and grocery companies have raked in billions during the pandemic but shared little of that windfall with their frontline workers, who risk their lives each day for wages that are often so low they can’t support a family.

This is especially true of Amazon and Walmart, the country’s two largest companies. Together, they have earned an extra $10.7 billion over last year’s profits during (and largely because of) the pandemic—a stunning 56% increase. Despite this surge, we ranked Amazon and Walmart among the least generous of the 13 large retail and grocery companies studied in our report. The two companies could have quadrupled the extra COVID-19 compensation they gave to their workers through their last quarter and still earned more profit than last year. 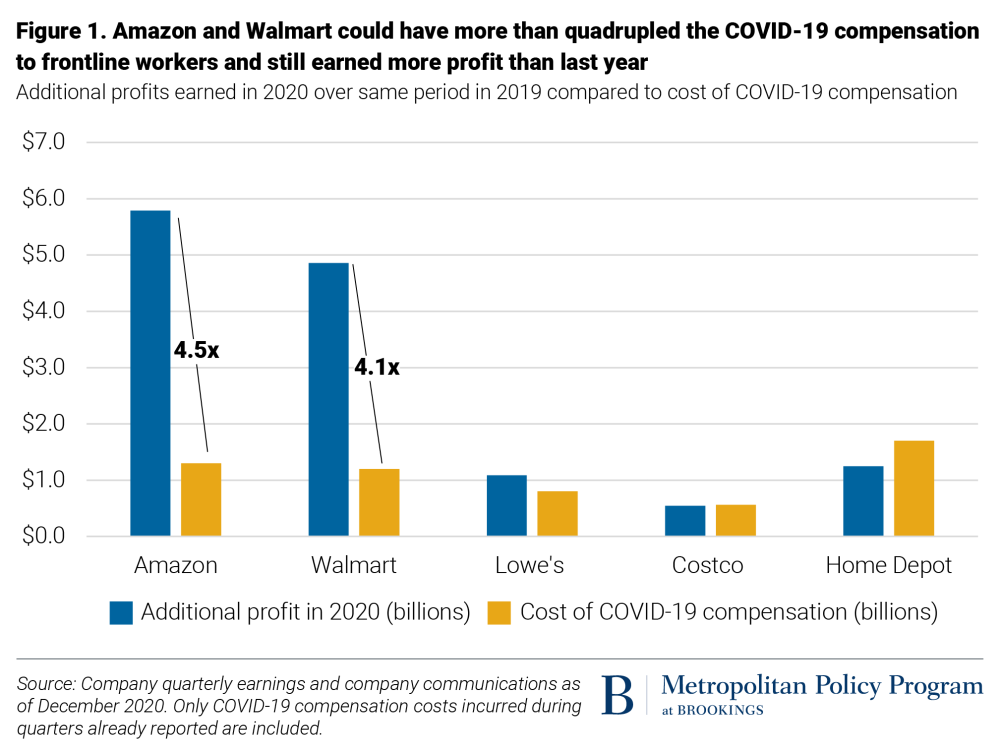 Through the end of 2020, the total additional COVID-19 compensation Amazon and Walmart will have provided their frontline workers represents only a small fraction of the companies’ extraordinary earnings, and an even smaller percentage of the stunning, pandemic-fueled wealth created for their richest shareholders. Stock prices for Amazon and Walmart have soared 70% and 36%, respectively, since the start of the pandemic. Meanwhile, worker wages will have grown only 7% and 6% by the end of the year, even after the new December bonuses that the two companies announced earlier this month. 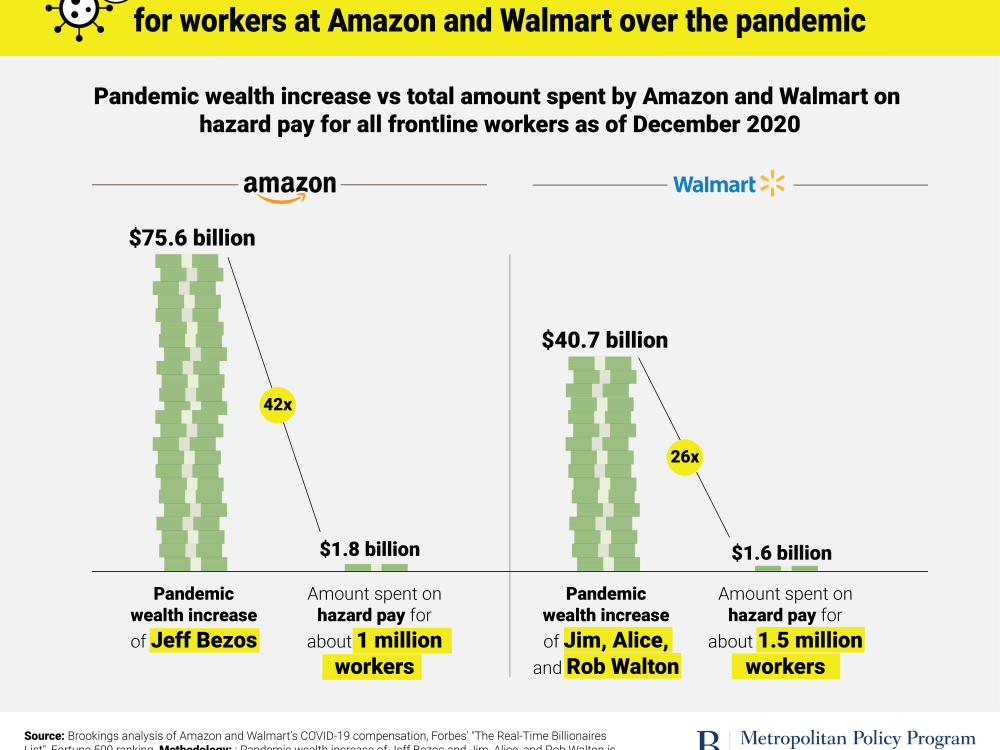 Since March, the fortune of Amazon founder Jeff Bezos (the richest person on the planet) has increased by $75.6 billion—42 times the cost of all pandemic hazard pay that Amazon will have given its roughly 1 million workers through the end of this year. The wealth of Alice, Jim, and Rob Walton (billionaire heirs to the Walmart fortune and the country’s richest family) has grown by $40.7 billion since the start of the pandemic—26 times the total amount of pandemic hazard pay Walmart will have provided its more than 1.5 million associates by the end of 2020. 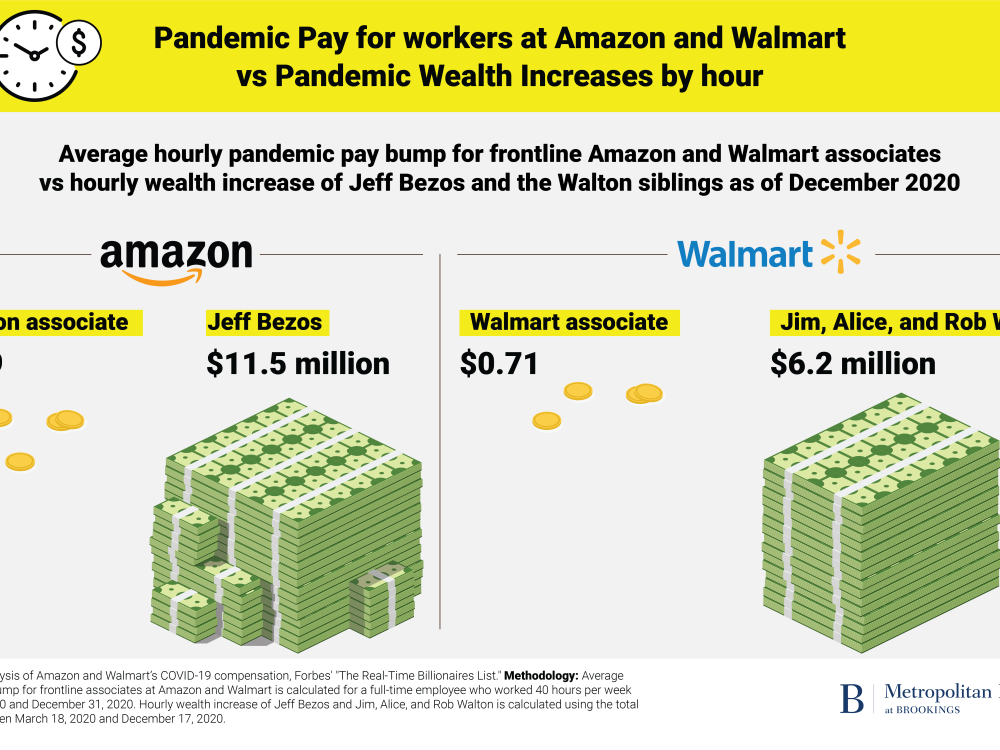 These disparities are also striking when broken down by the hour. Through the end of the year, we calculate that frontline Walmart associates earning starting wages and working 40 hours per week will earn the equivalent of an extra $0.71 (pre-tax) for every hour they worked since the start of the pandemic. In comparison, the wealth of the three Walton siblings has risen $6.2 million per hour, even while they sleep. Frontline Amazon workers will earn the equivalent of an extra $0.99 per hour (pre-tax) for each hour worked over the pandemic. Meanwhile Jeff Bezos’ wealth has risen $11.5 million an hour.

Workers are risking their lives for ‘pennies’

Today, the gap between the extraordinary wealth of Jeff Bezos and the Walton family and the struggles and sacrifices of frontline workers like Leah, a Walmart associate who preferred not to use her real name, is wider than ever.

Even before COVID-19 pandemic, Leah struggled to make ends meet. The starting wage for Walmart associates like her is just $11 per hour—far less than the $16.54 per hour needed to meet the basic needs of a family, and considerably less than the $15 per hour starting wage at Walmart’s competitors Target and Costco.

During the pandemic, Leah has questioned the sacrifices she makes for a job that poses a deadly risk to her family but pays too little for her to support them.

“At the end of the day, I am making you a rich person and I am putting myself at jeopardy,” said Leah in an August interview, a Walmart associate who preferred not to use her real name.

“I’m literally scared,” Leah said an August interview. “I have two children and a grandbaby. Both of my children have asthma. We are all at risk.”

Leah explained that with a pay increase of just $2 to $3 extra dollars an hour, she could afford to buy essential items when she needs them most. Walmart’s windfall pandemic profits could allow the company to easily afford such a raise: In the first three quarters of 2020, Walmart earned an additional $4.9 billion compared to last year—a 45% increase. With that, the company could have offered hazard pay to associates like Leah equating to nearly an extra $2.50 per hour and still have earned more profit than the previous year, when workers weren’t risking their lives.

Instead, the three one-off bonuses that Walmart paid full-time workers between March and November were worth an equivalent of only $0.63 per hour. In Walmart’s last quarter, ending in October, the company did not pay any COVID-19 bonuses at all, despite earning $1.8 billion in extra profits—a 56% increase compared to the previous year—and repurchasing $500 million of its shares.

Earlier this month, Walmart announced a new round of bonuses for December. Combined, the four bonuses will translate to just $0.71 per hour extra for full-time workers since the start of the pandemic through the end of this year—a 6% pay bump for a Walmart associate working 40 hours a week and earning starting wages. That is a fraction of what Leah said she needs just to get by.

“It is really pennies that you are giving me to risk me and my family’s life,” she told us. “Is it worth taking the risk? At the end of the day, I am making you a rich person and I am putting myself at jeopardy.”

While Leah’s low pay at Walmart has increased only modestly in the pandemic, many of her peers at competing retail companies earned significantly more COVID-19 compensation, often on top of higher starting wages. Companies like Costco, Home Depot, Best Buy, and Target provided more generous COVID-19 compensation to their workers through a mix of bonuses, hourly hazard pay bumps, and permanent wage increases. 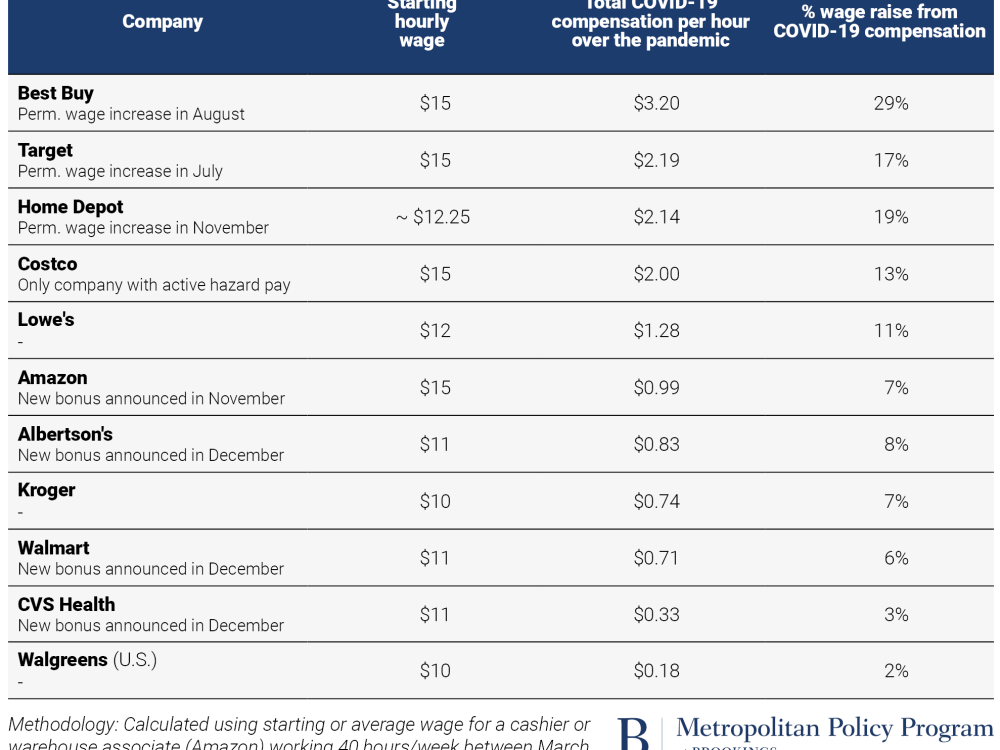 For example, Best Buy’s extra COVID-19 compensation was four and half times more generous than the extra pay Walmart workers received and more than three times the extra pay for Amazon workers. The extra COVID-19 compensation for workers at Target, Home Depot, and Costco was approximately three times more generous than Walmart and more than twice as generous as Amazon. 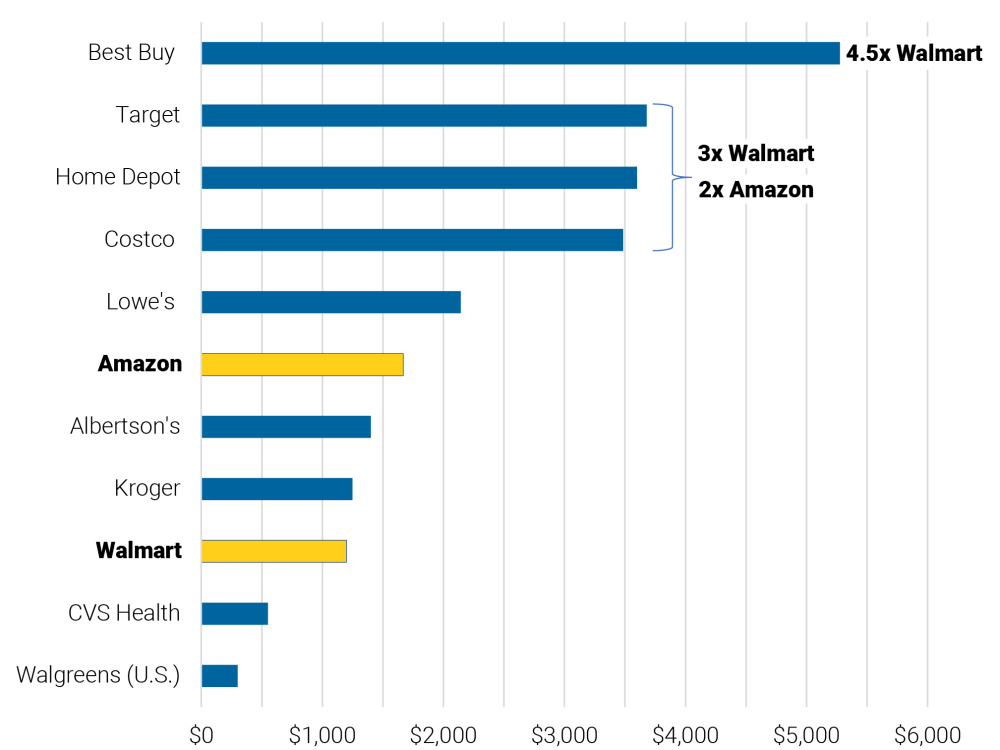 “Walmart is not doing enough compared to every other retailer out there,” a Walmart associate who preferred to remain anonymous told us in an August interview. “They can afford to do more than they are to show they appreciate the risks we are taking being out on the frontline making them money.”

Costco, for example, drew so little attention to its generous hazard pay—no press releases, no information on their company website, no TV ads—that we didn’t even know that the company had sustained its extra $2 per hour hazard pay throughout the pandemic until a proud Costco employee read our November report and informed us. The company has quietly spent $14 million of its pandemic profits each week to compensate its workers, on top of industry-leading starting wages of $15 per hour, according to a Costco executive who responded to our inquiry. As illustrated in Figure 1 above, Costco’s generosity resulted in an even balance between additional profits and additional worker pay.

A moral imperative to act

Amazon and Walmart do not have to provide living wages or hazard pay to their workers. The prospects of Congress raising the federal minimum wage, mandating hazard pay, or introducing more sweeping changes likely hinge on the outcomes of January’s Senate runoff elections in Georgia. And in a weak labor market with millions of unemployed workers, retail companies may not need to raise wages to attract applicants to risky work.

But even if these corporate giants are not forced to share their pandemic wealth with the workers who make it possible, they should anyway. Companies like Walmart and Amazon have the means—and the moral imperative—to provide higher hourly hazard pay and raise wages permanently. Their frontline essential workforce, who have helped nearly all the rest of us get through the pandemic, certainly deserve it.

The COVID-19 hazard continues, but the hazard pay does not: Why America’s essential workers need a raise

Grocery workers are keeping Americans alive during the COVID-19 pandemic. Here’s what they need.

The authors would like to thank Julia Du, co-author of the "Windfall profits, deadly risks" report, for her excellent research support.

Is the US ready for the next recession?

How did COVID-19 demonstrate the value of nontraditional data?