The nation’s persistently weak productivity growth continues to cast a pall. Without faster gains neither the middle class nor the less well-off will see an increase in standard of living or sufficient income growth. And yet, little consensus exists on what to do about the problem, or whether much can be done.

The economist Robert Gordon maintains that the recent slowdown is likely permanent and disbelieves the ability of policy to offset it by more than a few tenths of a percent. By contrast, technologists like Erik Brynjolfsson and Andrew McAfee take a more optimistic view and argue that technology innovation—robots, driverless cars, the Internet of Things—is poised to drive radical productivity growth. More broadly, the abstract, uncertain nature of the productivity conundrum has stumped many leaders on what to do about it.

However, one way to gain traction is to make the issue more concrete by focusing on industries and firms. This approach has underlain the Metropolitan Policy Program’s focus on high-productivity advanced industries and runs through recent publications from the Organisation for Economic Co-operation and Development (OECD) and the Information Technology & Innovation Foundation,  which focus on the “diffusion” of productivity. Overall, this work notes that not all of the nation’s economy is adrift. Rather, it notes that certain industries and firms are clocking significant productivity growth, while most others lag. The takeaway:  One of the most practical ways to move the productivity dial nationally—improving wages and standard of living for the middle class and less well-off—is to learn what’s working in the most advanced industries and firms, and adopt those practices across the board.

To get a feel for why this matters so much, it’s first important to remember that productivity must grow before wages improve for workers. To be sure, wage inequality within firms has been growing, and profits have frequently not been fairly shared; however, significant wage premiums exist for all workers, at every education level, in the super-productive advanced industry sector. 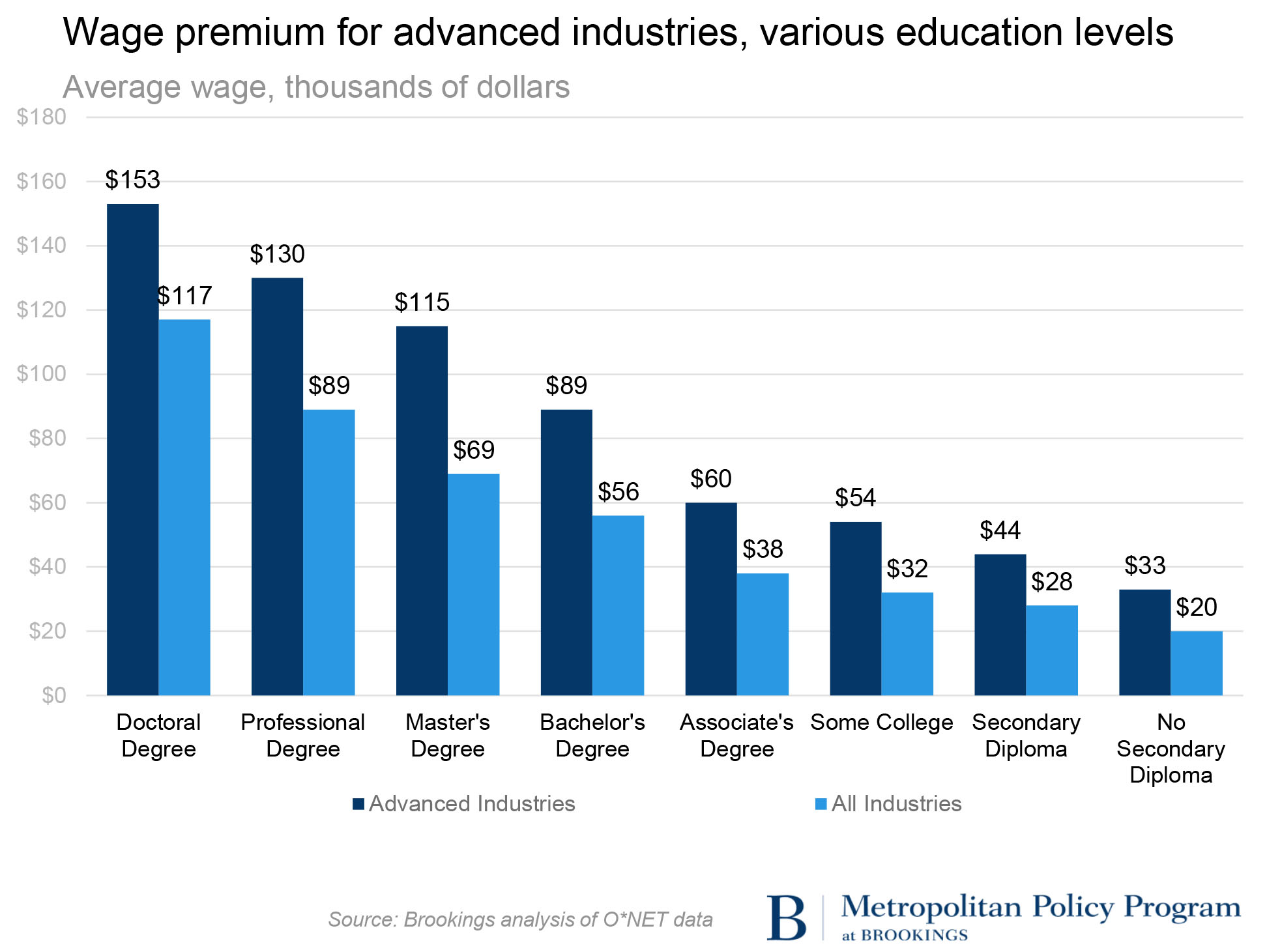 The key point:  Productive industries and firms tend to pay to pay better, at every level. 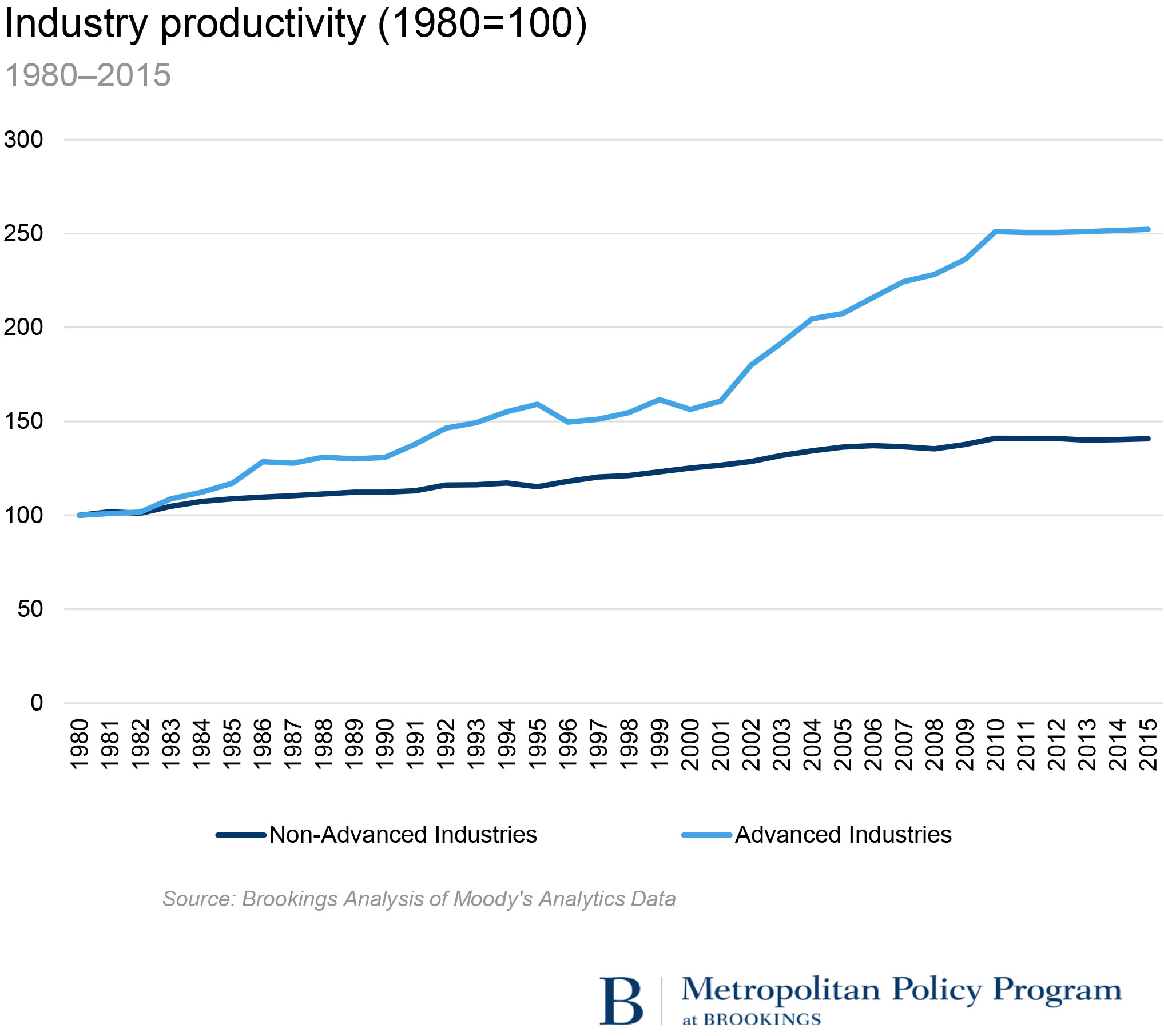 The much stronger showing here of the advanced industries reflects the sector’s continued capacity to innovate in multiple dimensions. Advanced industries have steadily increased their productivity by developing and applying technological, organizational, and human capital gains (often through “digitization”).

But the strong performance of the advanced sector also highlights how much other industries have struggled to adopt innovations and otherwise keep up.

See in the bar chart below, for example, the strong productivity growth of key advanced industry sectors and the much slower growth of the productivity of other industries: 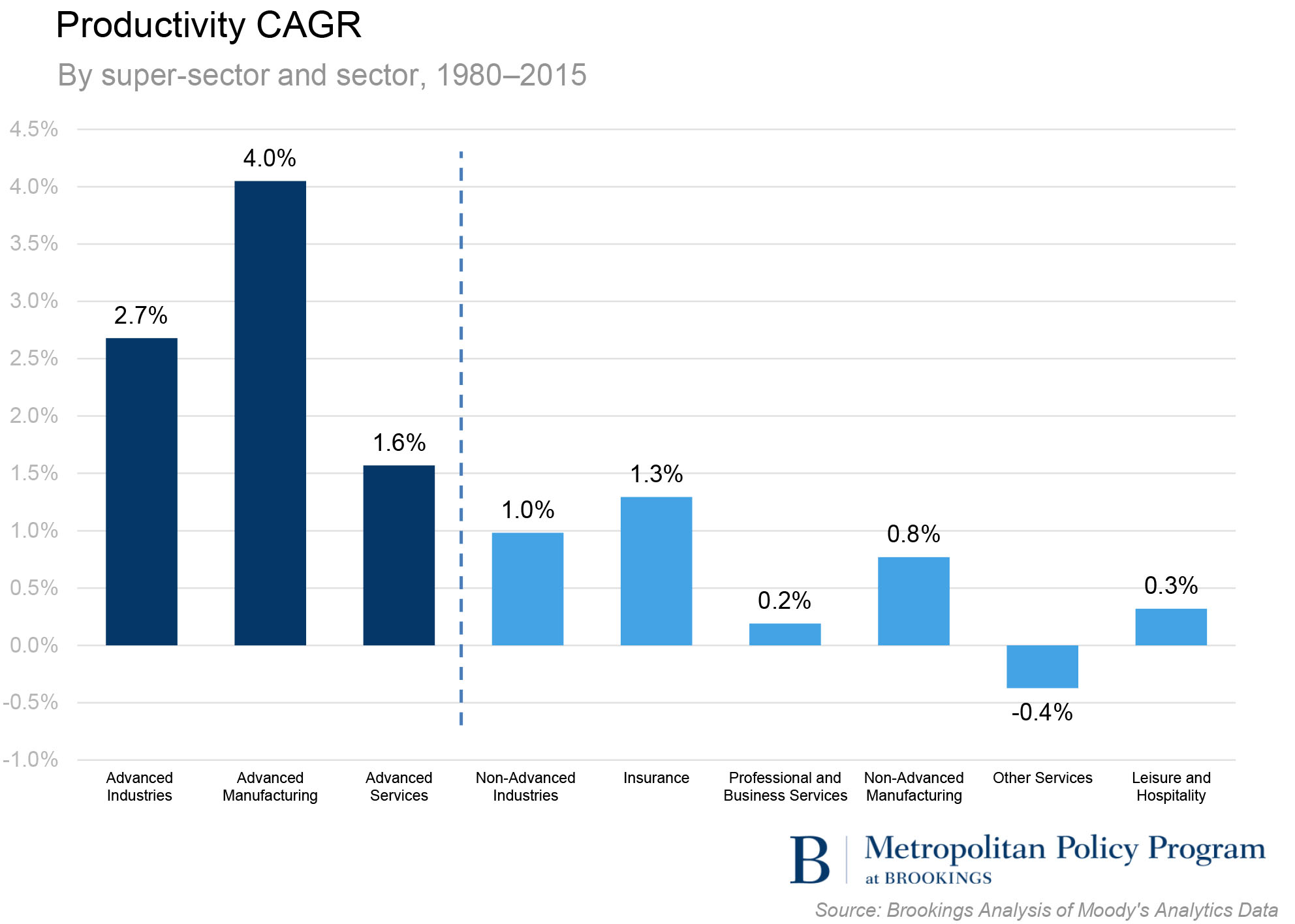 And so does another set of productivity gaps: those between firms—namely between the most productive firms within industries and other firms in each field. Staying with the advanced industries data, advanced manufacturing firms generate some $216,000 worth of output per worker while non-advanced manufacturing concerns generate just $102,000. Likewise, recent OECD research concludes that the 100 most globally productive “frontier” firms in each relevant industry are on average four to 10 times more productive than non-frontier firms, depending on which productivity measurement is employed. 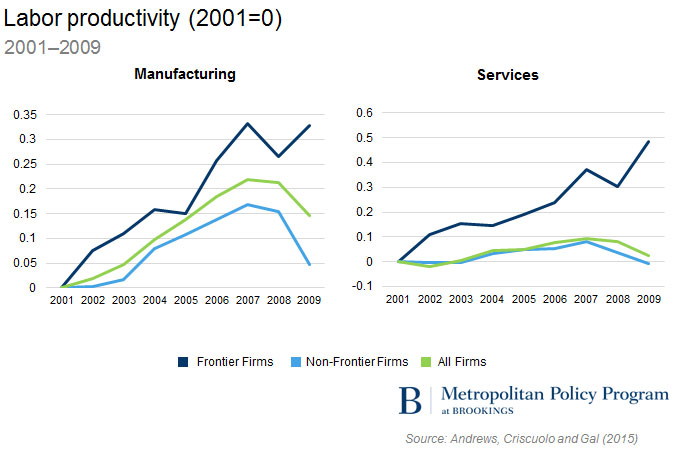 So, what are the policy implications of this insight? One implication is simply that many industries and firms have abundant room to boost productivity. Notwithstanding those like Gordon who see little hope for significant improvements, the productivity deficits of huge, low-performing industries and the majority of U.S. firms show where to look for the gains that can improve all Americans’ standards of living. Likewise, the consistent gains of many advanced industries suggest where to find technologies and practices for driving progress.

To generate gains, a national, state, local, and industry productivity push should seek to foster further innovation at the frontier and encourage faster diffusion of advances across industries. Such an approach assumes that boosting the nation’s productivity should begin with stepping up efforts to drive technological innovation in advanced industries and firms that disproportionately deliver transformative inventions. These industries and firms are the nation’s chief source of the innovations that drive productivity growth, so their progress must be encouraged and accelerated. At the same time, though, accelerating advanced or frontier inventions will not be enough. The sheer size of the rest of the lagging economy underscores the fact that securing the broad productivity gains the nation needs largely depends on reviving what the OECD calls the “diffusion engine.”

Not everything is obvious about what restarting the diffusion engine will entail, but some things are clear. Policy and industry leaders should seek to accelerate technology and upgrade lagging industries, such as through investments in digitization, as is now happening in health and education industries. (Digital technologies and business models are the great enabling technology of our time!). Regulators, likewise, should foster competition in industries, which facilitates within-firm and within-industry productivity improvements. And across the board, up-skilling, aligned with industry technology trends, remains imperative.

In sum, the productivity crisis is not total.  Progress continues at the frontier; it’s the drift elsewhere that is the problem. Looking forward, the challenge is going to be in transferring gains at the edge to the rest of the economy.