Steve Case’s bus tour, dubbed “The Rise of the Rest,” showcases how entrepreneurs are coming up with new products and technologies all across the country, not just in the Bay Area. Of course, while innovation does occur everywhere, new data suggest access to the venture capital needed to support innovation has become more, not less, concentrated in the Bay Area. 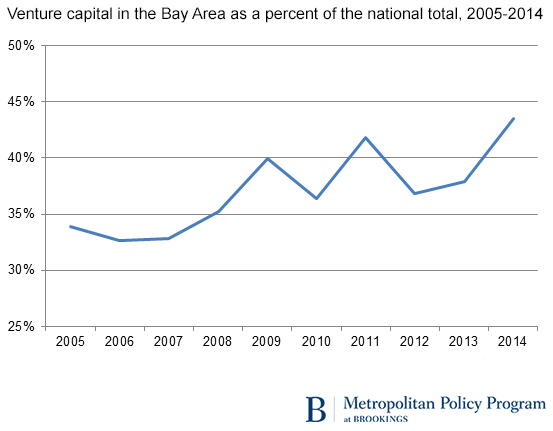 One explanation for the increased share of venture capital in Silicon Valley is success breeds success. Venture funding is a risky business where most profits are made on very few blockbuster deals. The sheer concentration of deals in the Bay Area has led to far more winners than anywhere else, which in turn, has attracted more venture firms to the region.

Given the success of the Bay Area in attracting venture capital, it’s tempting for public and private sector leaders around the country to try and imitate the venture capital market of San Francisco and Silicon Valley. For example, many cities are creating accelerator models that mimic Y Combinator, the legendary Silicon Valley software-specific accelerator.

However, a number of factors suggest that mimicking Northern California is not a formula for success elsewhere. Instead cities should shore up local capital and take advantage their own unique strengths. First, venture capital in San Francisco and Silicon Valley funds software at a higher rate than the rest of the country. Breaking down venture capital by technology type (such as software, drugs, automotive, electronics, etc.), between 2005 and 2007, 13 of the top 25 technology categories (there are over 200 technology categories) receiving venture funding in the Bay Area were outside software in areas like semiconductors, communication equipment, and pharmaceuticals. This of course makes sense, as Silicon Valley got its name by making silicon computer chips, not software.

Over the last three years (2013-2015), however, the number of the top 25 technology categories outside of software declined to only six. And if measured by number of deals and not average value, each of the top 35 technology categories funded over the last several years were within software. Part of this has to do with a multi-decade decline in the U.S. semiconductor industry, as well as a national shift in venture funding towards software. But it’s undeniable that, in terms of venture capital (albeit only one measure of innovation), Silicon Valley is looking a lot more like “Software Valley.”

Capital formation strategies for software are an odd fit for many places because many times one round of funding is enough for a software company because they can grow quickly through instantaneous downloads. On the other hand, places with venture markets in manufacturing or health care often need more patient capital or multiple rounds of funding.

Second, venture deals are becoming larger and later stage in the Bay Area. Between 2005 and 2007 over three-quarters of venture dollars went to deals worth less than $10 million, yet over the last three years that figure had declined to less than half. Again, this is not just happening in Silicon Valley and San Francisco; across the country venture firms are seeking to mitigate risk by placing larger bets on later stage technologies. But the Bay Area is at the forefront of this trend. Larger deals require larger venture funds, which many cities just don’t have.

There are two points of concern with the increasing concentration of venture capital in the Bay Area. First, venture capital helps regions achieve economic growth through innovation. If access to venture funds is geographically limited then the ability for cities to achieve technology-based growth is limited. Indeed, research suggests income inequality in the United States is driven more by variation between regions than within them. Second, because of its highly unique features, the Bay Area doesn’t provide an easily replicable model when creating strategies to develop local capital elsewhere. This is also important as more national venture firms are moving to the Bay Area.

As more of the nation’s venture funding flows to the Bay Area, other regions will need to get serious about carving out competitive advantages and strategies to bolster local capital networks.

In the second part of this blog series we will highlight several different cities with radically different venture capital opportunities than the Bay Area and suggest ways public and private leaders can bolster local capital.