U.S. research and development (R&D) is an increasingly troubled enterprise. So conclude my colleagues Scott Andes and Mark Muro in a recent assessment of the quantity and composition of the country’s R&D investments.

Not only is the scale of the U.S. research effort insufficient, but its format is frequently sub-optimal as well. Too often federally financed basic research remains completely divorced from industry-led developmental work, to the detriment of the nation’s innovation outcomes. After all, with technology growing ever more complex, collaborative forms of R&D—where researchers from different sectors actively engage with a wider ecosystem of users, competitors, and developers of complementary technologies—promise to be the most productive.

One place to look for insight into the nation’s collaborative research scene is the National Science Foundation’s (NSF) Higher Education R&D Survey, tracking the total value and source of all R&D expenditures routed through universities each year. In 2013, $67.2 billion worth of R&D was conducted at U.S. universities—$39.5 billion of that was funded by the federal government; $15.0 billion by the institutions themselves; and, coming in just below non-profit organizations and state and local governments, $3.5 billion by businesses. That’s just 5 percent of the total.

The small size of this slice belies its importance: The metric is a useful proxy for the extent to which industry and academia are engaged in a productive, innovation-oriented partnership in a region. The table below lists the 10 major metro areas where these funds were most significant relative to the size of the local economy. 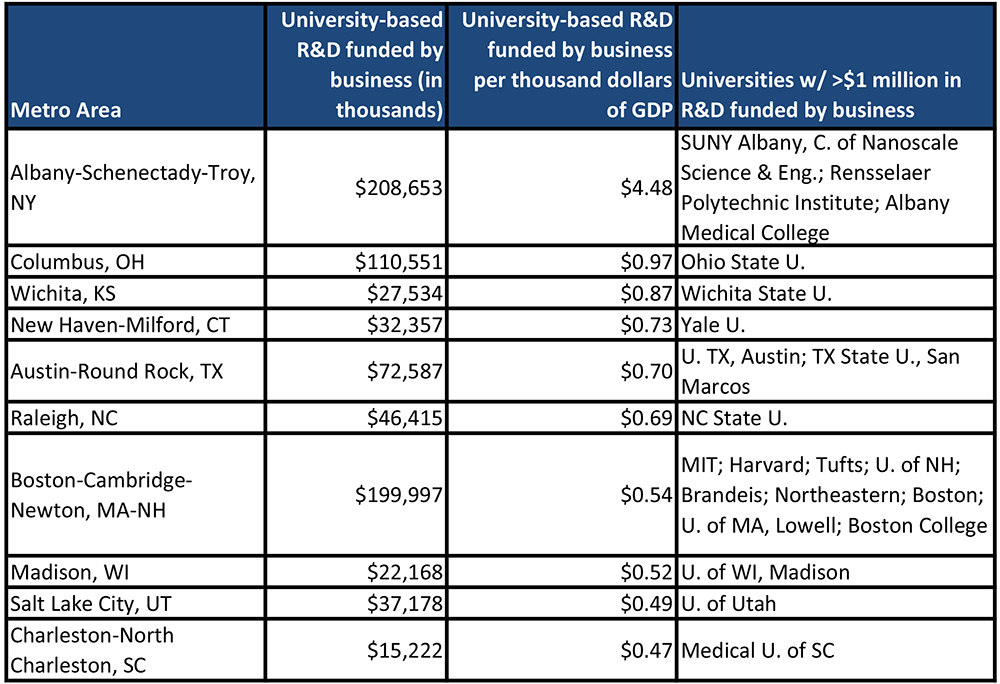 Download the full dataset with information for the country’s 100 largest metro areas here.

Albany, NY, is an outlier at the top of the list. There, public-private investment in a nano-technology center of excellence has seeded a rapidly-expanding cluster of firms around semiconductors that has already registered some major breakthroughs. Astonishingly, after more than doubling from the previous year, by 2013 the scale of private sector R&D conducted at university-based facilities in Albany surpassed Boston in both absolute and relative terms. (Examine R&D expenditures across all sources of funding, however, and five times more R&D is conducted in Boston). Similarly, the National Institute for Aviation Research, housed at Wichita State and embedded in a vibrant aerospace industry cluster, propels Kansas’ largest metro area to the top of the ranks. From Austin to Boston and Salt Lake City, it appears that applied R&D institutions whose core competencies align squarely with the local industry base tend to attract the most private investment.

This measure is only suggestive of the strength of the relationship between the private sector and academia in a place, though. The businesses funding the R&D may not be located in the same region as the university where it is performed. Universities also use many other avenues to push their innovations out to market: licensing intellectual property or fostering spin-offs, for example.

Nevertheless, the measure captures something important. The metro areas at the top of the list are prosperous and dynamic locales with thriving advanced industry bases. Many places lack the robust university-business collaborations observed in these lucky few, however. Fully one-fifth of the country’s large metro areas saw less than $1 million of business-funded R&D at their universities in 2013. A few places, such as Boise and Bridgeport sustain innovative economies through a variety of other avenues. More commonly, though, the places without such high-performing anchor institutions are the very places struggling to transition into high-value industries, such as Grand Rapids, Scranton, Jackson, Las Vegas, and Stockton. These NSF data reveal that the financial resources that academia and the private sector jointly bring to bear for R&D remain too small in most places and too thinly spread nationwide.