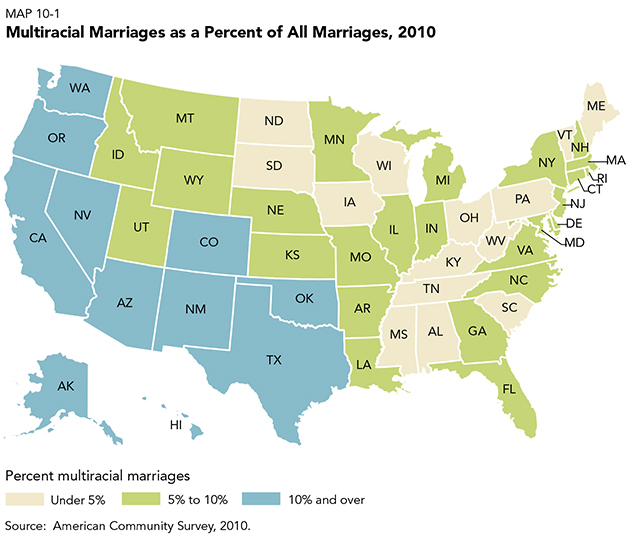 These states have longstanding populations of Asians, Alaska Natives, and American Indians, respectively. Beyond these is a mix of states where Hispanic and Asian immigrants have made both long-term and recent footprints—including New Mexico, California, Texas, Washington, Oregon, Arizona, Nevada, and Colorado. At least one in 10 marriages in these states is multiracial. At the other end of the spectrum are 14 states where multiracial marriages are less than 5 percent of all marriages. They are largely located in New England, the industrial Midwest and Great Plains, and parts of the Old South. In West Virginia, only about three in 100 marriages are multiracial.

More relevant for the future is the dispersion of multiracial marriages to quickly growing parts of the country that serve as new destinations for Hispanics and Asians. Growth is particularly strong in states such as Georgia, Utah, Idaho, and North Carolina—those with rapid growth in their Hispanic populations as well as growth in largely white-Hispanic multiracial marriages. This is also the case for several heartland states such as Minnesota, Connecticut, Pennsylvania, and Indiana.

Although many new Hispanic migrants to these regions are less assimilated than elsewhere with regard to measures such as English-language proficiency or education, they are likely to have substantial interaction with the larger non-Hispanic populations in these states—leading to higher multiracial marriage rates. For example, in Georgia and North Carolina, the prevalence of multiracial marriages among Hispanics is 35 percent. In Idaho and Utah, the prevalence is 43 and 44 percent, respectively. These rates stand in contrast to rates of 26 and 21 percent in the more mature melting-pot states of California and Texas.