Worries about anemic U.S. productivity growth are generating new worries about U.S. research and development growth. There’s not enough of either, say myriad economists, researchers, and business people; the slump in R&D may be contributing to the lag in productivity, some say. And last week the U.S. House of Representatives sharpened concerns by passing a controversial rewrite of the America COMPETES Act that would reprioritize and cut federal research funding.

These worrisome trends and the counterproductive response suggest it might be time to revisit the underpinnings of the nation’s innovation system.

What is the core problem? To start with, the overall scale of the U.S. research and development effort is simply not big enough.

Total R&D investment has plateaued as a share of the economy, stabilizing at about 2.8 percent of gross domestic product in 2012, according to the National Science Foundation. And while that level is close to historical highs, other nations have pushed past us, as notes the Metro Program’s recent report “America’s Advanced Industries.” Once the world leader in R&D per GDP, today the United States ranks 10th among OECD countries (Figure 1). Equally disquieting is the fact that total U.S. basic research—what the New York Times’ Eduardo Porter recently called the “fundamental building block for innovation and economic advancement”—has been steadily slipping in the last decade. If the U.S. wants to defend and expand its crucial R&D- and STEM-worker-intensive advanced industries, it needs to increase the absolute size of its R&D effort. 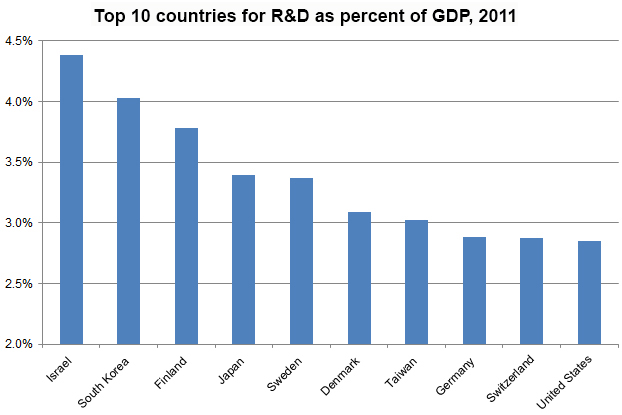 But the nation’s R&D problem is not just one of scale: It is equally a problem of composition, and of who does what. Over time corporations have moved away from investments in basic, foundational research and focused more on market-oriented “development” research (Figure 2). As Ashish Arora of Duke University and co-author of a recent study on industry R&D puts it, “large firms are withdrawing from investing in science internally and focusing more on development (less `R’ and more `D’).” At the same time, the federal government—whipsawed by free-market assertions that commercially oriented work is best left to the private sector—has reduced the “applied” and development share of its R&D expenditures and focused on funding basic science (Figure 3). 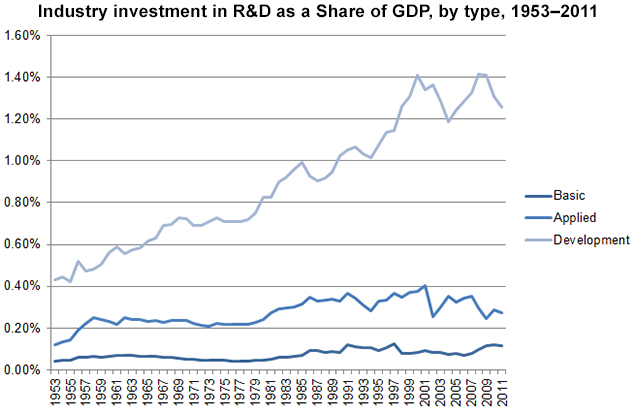 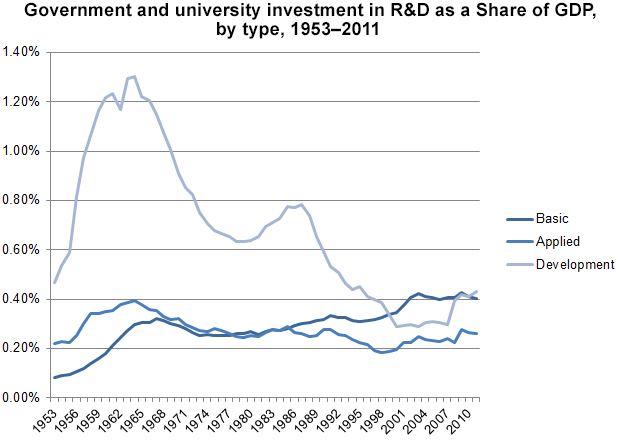 There are two problems with this R&D model. First, the innovation process—from scientific discovery to applied research and product development to the commercialization of new products—demands much greater integration than the current segregated division of labor can provide. In this regard, a model where universities and federal labs conduct most of the basic science and hope some of it makes its way into the commercialization activities of private firms with limited basic science capacity seems extremely sub-optimal. Second, there is reason to believe that even if such a bifurcated innovation model could work, both the public and private sectors are becoming weaker at their respective roles, rendering the overall system vulnerable. On the one hand, last week’s House cuts to the America COMPETES budget underscore the vulnerability of federal basic science support to ideological polarization. On the other hand, research like Arora’s and William Lazonick’s suggests that even corporate development work may be degraded by private-sector “short-termism” enforced by shareholders and financial markets. Increasingly, firms seem to value short-term and incremental innovations—reducible to patents—over the long-term benefits of in-house scientific capabilities.

In that sense, neither side of the current federal-corporate partnership to deliver innovation seems either sufficient or sound.

Clearly it’s time to look at some new models, and perhaps to explore a different paradigm. Look here for a few ideas soon.