On May 6 the Department of Labor released labor productivity data showing that output per worker fell by 1.9 percent during the first quarter of 2015. Many economic analysts and reporters interpreted this decline either as evidence of a sluggish economic recovery or as an anomaly due to temporary factors like bad weather and a strong dollar.

While these interpretations are compelling, neither fully explains the long-run decline in U.S. labor productivity. Over the last decade labor productivity grew annually by 1.4 percent—half the rate of the previous decade. This slower growth is surprising given that during the recession labor productivity improved as firms aggressively reduced their workforces and compelled remaining workers to do more with less. 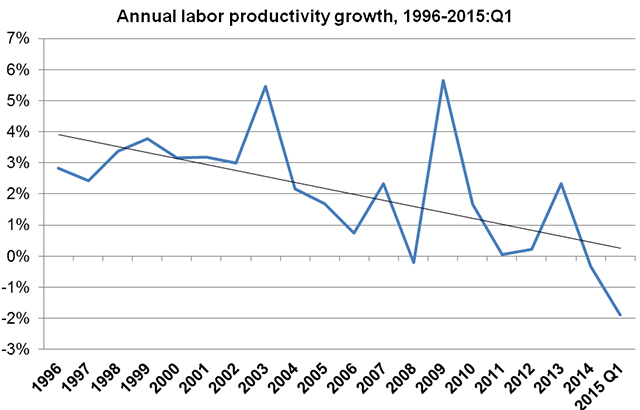 There is no shortage of explanations why labor productivity over the last decade did not keep pace with the prior decade, but one key factor that affected the prior decade’s growth was information technology.

Between the mid-1990s and 2000s, increasing use of IT helped make labor productivity grow quickly. As MIT’s Erik Brynjolfsson and Adam Saunders show, the simple presence of digital technology boosted productivity dramatically through a process that economists refer to as capital deepening. At the beginning of the IT era basic digital literacy could significantly improve worker productivity—just consider the difference between an administrative assistant in 1998 who could use email and one who could not.

Today the situation has changed. The basic digital skills that once provided a productivity edge now represent the minimum requirement for many jobs.

The current landscape has inspired new perspectives on how best to improve productivity. Those in the secular stagnation camp often argue that investments in technology are too low to maintain productivity growth. Less frequently discussed is whether investments in skills are too low. Although firms continue to invest in IT equipment and software (albeit at a lower rate than in the past), similar investments in workers’ acquisition of more advanced digital skills have not materialized. Over time, this shift in private-sector investment from workers to capital equipment prompted labor’s share of productivity growth to decline by 5 percent over the last decade. 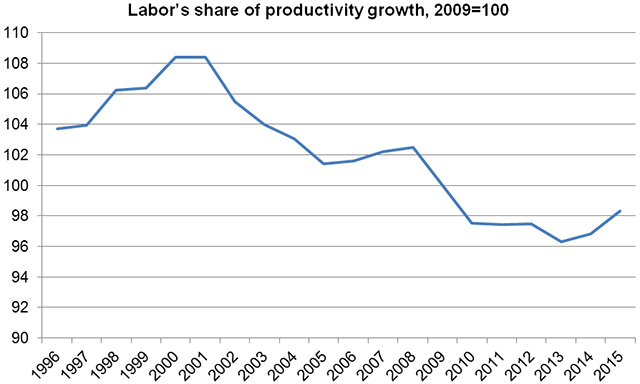 So how can the United States reverse this trend? First, states, metropolitan areas, and school districts must recognize that basic digital literacy is no longer sufficient preparation for the 21st century workforce. Familiarity with higher-level skills such as coding will be critical as the role of technology continues to grow. The 60-plus school districts that have partnered with Code.org have already begun to move in this direction. By introducing students to computer science fundamentals early on, Code.org and its partner districts will help get more people on pathways to well-paying jobs in computer programming and other fields.

Second, education and training providers and area employers can work with intermediary organizations to align education and workforce development ecosystems with industry labor needs. The sector panels convened by the Workforce Development Council of Seattle-King County offer a strong model for workforce-oriented collaboration.