Robots remain an object of quizzical concern—and confusion. In early April the Third Way think tank published research by Henry Siu and Nir Jaimovich that attributes to robots and automation the fact that routinized jobs have all but vanished from the economic recovery.

And yet, in February, Larry Summers professed himself nonplussed that, for all of the anecdotal evidence that automation is altering the workplace and presumably increasing productivity, the “productivity statistics over the last dozen years are dismal.” In other words, something is failing to compute in the automation debate.

Especially frustrating has been the fact there hasn’t been much macroeconomic research on the impact of robots to persuade commentators to move from anecdote to analysis.

However, new evidence begins to shed some light on the macroeconomic role of automation in the economy. In a new paper from London’s Center for Economic Research, George Graetz and Guy Michaels of Uppsala University and the London School of Economics, respectively, find that industrial robots have been a substantial driver of labor productivity and economic growth. Graetz and Michaels employ new data from the International Federation of Robotics to analyze the use of industrial robots across 14 industries in 17 countries between 1993 and 2007. Overall, they conclude that the use of robots within manufacturing raised the annual growth of labor productivity and GDP by 0.36 and 0.37 percentage points, respectively. That might not seem like a lot but it represents 10 percent of total GDP growth and 16 percent of labor productivity growth. Making that even more astounding is the fact that during the study’s time period robots achieved that impact while accounting for just 2.25 percent of the total assets of the industries studied.

These findings speak to Summers’ question about the invisibility of automation in the productivity stats and confirm that in fact the robots are becoming visible in the statistics.

The new research also reveals that robotics are not just visible in the data but significantly so. In fact, the Graetz and Michaels analysis suggests that automation is beginning to take on the qualities of a true “general purpose technology” (GPT)—one that has a pervasive, longstanding impact on a number of dissimilar industries. While automation does not yet seem to be producing massive productivity gains, it’s worth remembering that that was also the case for other GPTs like information technology at their genesis. So how does the economic impact of robots compare to other disruptive technologies like IT? Surprisingly well. Research indicates that the steam engine, a classic example of a GPT, increased labor productivity by 0.35 percent annually between 1850 and 1910—or by about the same amount as robotics have of late (though the steam engine did so for a much longer time period). More recently, other analysis has shown that the pervasive IT revolution supported 0.60 percent of labor productivity growth and 1.0 percent of overall growth between 1995 and 2005—or about two to three times the amount contributed by robotics thus far. However, capital investment rates in IT during those years were also five times higher than those in industrial robots during the 1993 to 2007 period. So it seems likely that the young robotics revolution is going to be a big, big deal. 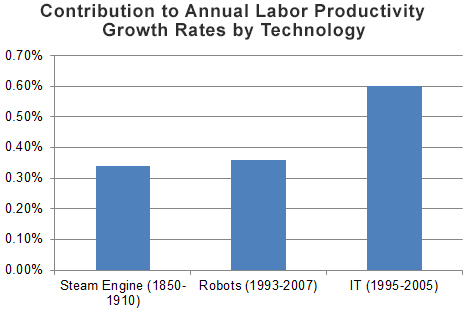 As to the implications of the trend, workers are being and clearly will be dislocated while others are being and will be rewarded for working with the new bots. Indeed, Graetz and Michaels found that increased use of robots was correlated with higher incomes for workers in those industries.

The bottom line is that new evidence suggests we are at the beginning of an important time in the global economy. Increasingly visible in the productivity data, robots are going to play a critical role in structuring the world of work, the growth of productivity, and the shape of prosperity.