As uncertainties abound over federal transportation spending and another shortfall in the Highway Trust Fund looms, states and localities are stepping up to address their infrastructure challenges head on. By raising gas taxes, launching ballot initiatives, and forging public-private partnerships, regions are exploring a range of strategies to finance a growing backlog of projects.

Seldom mentioned, however, is the increased proliferation of tolls emerging throughout the country’s road network to support new capacity and other ongoing improvements. While federal laws prohibit new tolls on existing interstate highways —with certain exceptions—and while citizens from Connecticut to Texas have protested new tolls over the past few months, several states are considering them as a viable financing option, building off a nationwide trend.

In 2013, for instance, tolls covered about 5,400 miles across all interstate and non-interstate roadways nationally, a 15.1 percent jump since 2003. Toll roads have expanded their mileage by nearly 350 miles, or 7 percent, since 2011 alone. By comparison, total system mileage has grown by only 3.6 percent over the past decade. 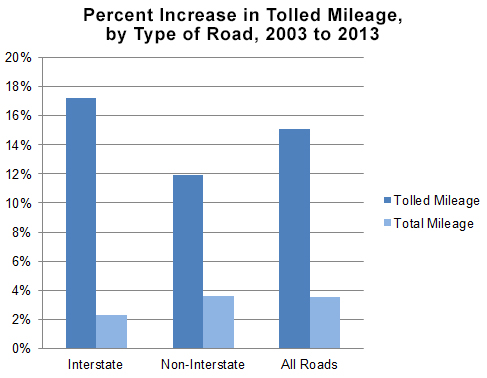 In this way, despite the financial risk and relatively flat outlook in performance for many toll roads, they are rising in importance on a national scale. From the creation of new high-occupancy toll (HOT) lanes in Virginia to express lanes in Colorado, a variety of toll projects are moving forward, with the aim of expanding transportation options and reducing congestion. Similar plans to widen and extend toll roads are unfolding in Georgia and Florida as well.

Over time, tolls are becoming a fixture across many regions, especially as federal policymakers are reluctant to raise general revenue to pay for transportation projects. Whether tolls continue to gain traction remains to be seen, but a recent proposal from the White House figures to shine even more light on the issue by lifting the ban on tolls for existing highways—and allowing for more experimentation at the state level. Amidst federal dysfunction, every financing option appears to be on the table to repair the country’s infrastructure, and tolls are likely to be one of many possibilities attracting attention in the months to come.