Full-time workers between the ages of 25 and 64 with at least a bachelor’s degree earn an average of $84,000 per year, compared to $42,000 for those with only a high school diploma. There is strong evidence that education, in fact, causes higher earnings and that the value of college has consistently grown relative to high school since 1980. Beyond degrees, skills, acquired through informal or formal education and training, also predict higher earnings. So, it is apparent to nearly everyone that enhancing the opportunities to acquire knowledge and skills would make many Americans better off.

Yet, this idea—that more or better education can reduce inequality—has come under fire as of late. Paul Krugman, Ezra Klein, and others have recently argued that inequality has little or nothing to do with education.

How can this be? Using tax records, Thomas Piketty and his collaborators have shown that the richest 1 percent absorbed almost all income growth in recent decades. Since more than 1 percent of the population has a bachelor’s degree, it must be something else driving the spectacular performance of the 1 percent. Meanwhile, the median salary for bachelor’s degree workers peaked in 2002.

Drawing attention to and understanding these trends is important. Yet, for a number of reasons, it is misleading to suggest that education has no role in reducing income inequality. Here are a few.

First, not all bachelor’s degrees have fared equally. There are huge differences in lifetime earnings across fields of study. While income growth halted for most workers (including most college graduates) during the 2000s, those educated in science, technology, engineering, and mathematic (STEM) and business skills have seen decent salary growth, despite the toll of the Great Recession. For example, computer and mathematical workers saw real median wages go up 6 percent from 2000 to 2014, and business and finance workers and engineers saw similar increases. Meanwhile, some of the largest occupational categories for those with liberal arts degrees saw incomes fall, including sales workers and teachers. This pattern is consistent with unemployment and job openings data showing a mismatch between supply and demand for certain skills that predates the recession and was only briefly ameliorated by it. 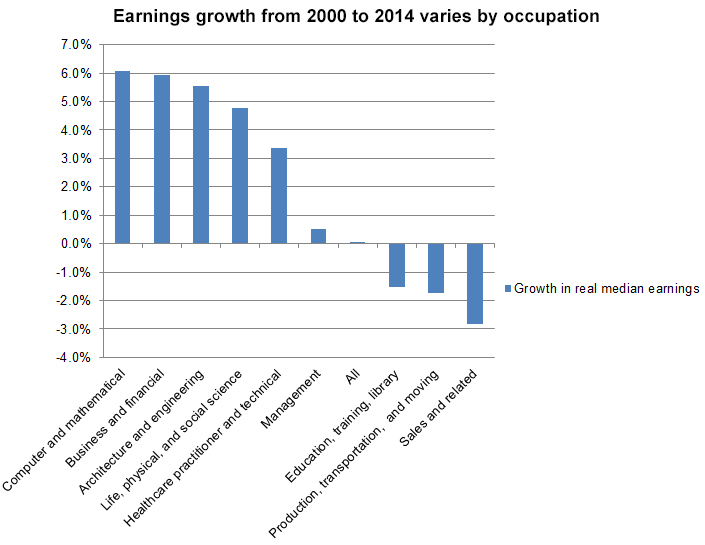 and consumer price index data from the Bureau of Labor Statistics. Sample includes those employed full time as wage and salary workers.

A second point is that the bottom 99 (or 90) percent, including many college graduates, have done better in recent decades than Piketty’s tax record data would suggest, as more accurate data from the Congressional Budget Office show and Stephen Rose has discussed at length. The benefits of economic growth have been overly concentrated at the top but lower earners have not completely missed out.

Third, the weak post-recession growth in earnings for many college graduates does not negate their relative affluence. Most workers with just a high school diploma would have greatly preferred the luxury of high but stagnant incomes. Higher education in even a liberal arts subject would have delivered such comforts to many, even through the dismal 2000s. What they’ve faced instead is low and declining incomes.

A related point is that Krugman and others seem to prefer a measure of inequality that compares only top income shares to everyone else. That fails an important principle. Using only the 1 percent ratio, a family earning $370,000 a year, just below the 1 percent cutoff, could transfer half its salary annually to a family earning $20,000 without affecting inequality. Surely, lifting up the poor has moral and economic relevance.

Finally, education also has an important role to play in reducing top-income shares and is by no means incompatible with other needed reforms. The best way to combat excessive corporate profits is to democratize entrepreneurship and entry into highly profitable sectors like finance, health care, and technology. This would entail streamlining regulations and access to capital and eliminating rules designed to block competition. The diffusion of skills would enhance this effort. Almost all tech-company founders hold at least a bachelor’s degree and roughly half studied a STEM field. A better-educated population would generate more business owners, IPOs, and major financial deals, decentralizing capital and lowering consumer prices. Democratized knowledge is power to the people.