Black Friday, the day after Thanksgiving, is the biggest shopping day of the year and this year was no exception. While 2014 in-store sales figures are still being calculated (and debated), online sales are available and show consumers spent over $2.5 billion online over the holiday weekend this year—a 26 percent increase over 2013. Of that, consumer electronics and apparel constituted the lion’s share of sales, making up over half of all purchases.

Recently we described how innovation and global competition are rapidly bringing down the cost of certain goods and services and is thereby playing a critical role in combating the multi-decade stagnation of median wages. This year’s Black Friday sales numbers illustrate the point. Because of price declines outlined in the Consumer Price Index, on Black Friday the average wage earner was able to afford 42, 45, and 200 percent more apparel, electronics, and personal computers, respectively, than in 2000. That translated into over $620 million more sales over the Thanksgiving weekend.

Now consider that because of price increases in areas such as health care and education, consumers could afford 15 and 35 percent less health care and child care/tuition in 2014 than 2000. What would have happened on Black Friday if the prices of electronics and apparel actually grew over the last decade as a portion of median income at the same rate as did health care? In other words, how much less value would consumers have actually got from their Black Friday purchases of electronics and clothes if those industries mirrored the health care industry? As the graph below shows, consumer would have effectively received less than half of the clothing, less than a quarter on new computers, and 40 percent less video and audio devices—all while spending the same amount of money.

Black Friday Spending by Category, 2014 spending and spending if product prices grew at the same rate as health care between 2000 and 2013, Millions of dollars 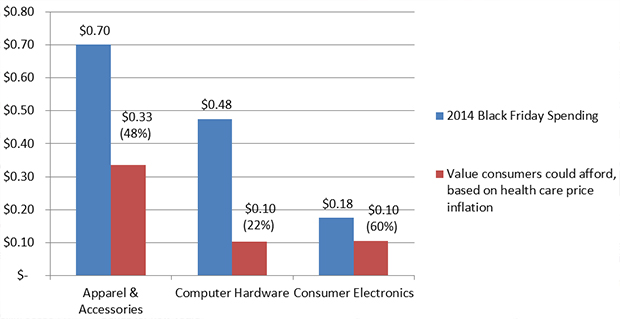 The bottom line is this: Prices have declined in IT products because of rapid technological advancement and in commodities like apparel because of cheaper imports and innovations in supply chain management, operations and logistics modeling. In both cases consumers are better off. Yet these benefits didn’t come about by accident. They are the output of public and private R&D expenditures, productive workers, and regulations that induced competition and incentivized equipment and capital investments.

If we want an economy that is both growing and equitable, policy makers should consider ways to push similar innovation and competition policies throughout the entire economy.