The “diversity explosion” that is impacting all parts of the country has also brought new minorities—Hispanics, Asians and multiracial persons—to the American South. But that doesn’t mean the region is shedding its traditional black-white image. That’s because the South is also a primary destination for blacks from all parts of the country—a reversal of the black Great Migration out of the South during much of the last century.

As of the 2010 Census, blacks were the largest minority in the South accounting for one-fifth of its population. Among the 16 states and Washington D.C., African-Americans constitute the largest minority in all but Florida and Texas—the region’s primary destinations for Hispanics—as well as Oklahoma, with its sizable Hispanic and American Indian populations. The black population in each of the remaining Southern states is more than twice as large as the Hispanic population and more than three times as large in eight states including Georgia, South Carolina and Tennessee. In metropolitan Atlanta, blacks comprise nearly one third of the population while Hispanics account for nearly 10 percent.

Both the 2008 and 2012 presidential elections have shown that the black voting bloc is continuing to make the South more competitive among major parties. So although the South is attracting whites and more of the nation’s new minorities than ever before, it will continue to stand out from the rest of the country by maintaining a substantial African American presence. 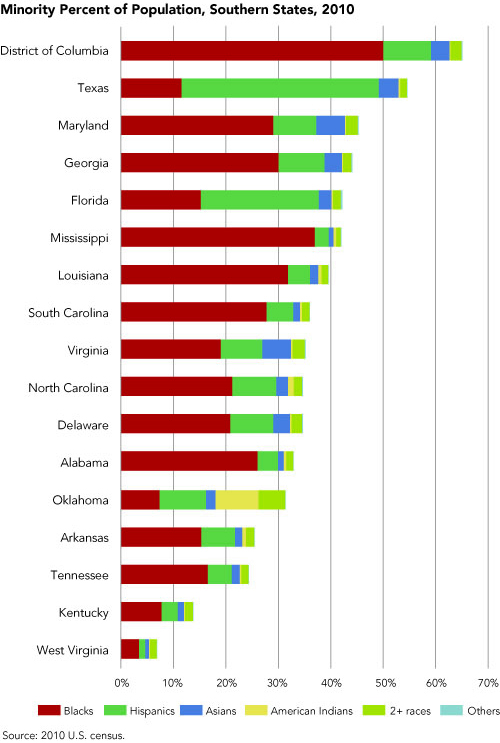