After weathering the global financial crisis and subsequent recession better than most developed nations, Germany appears to be struggling. The government slashed its growth forecasts in October, and The Economist even recently mentioned the dreaded “R” word. Recession fears eased last week, however, when new data revealed the country’s traded sector surged in September. Nonetheless, Oxford Economics, a consultancy, projects that the German economy will grow a tepid 1.5 percent in 2014. (We’ll report more on these figures in our forthcoming Global Metro Monitor.)

Yet national growth figures alone obscure more varied economic performance within Germany. Across Germany’s 14 largest metropolitan regions—which together account for 52 percent of its population and 57 percent of GDP—expected real GDP growth in 2014 varies widely. Frankfurt, Köln-Düsseldorf, and Berlin are all expected to perform worse than the country as a whole. The economy in Saarbucken, the formal coal hub and capital of Saarland, is projected to barely exceed 1 percent growth.

On the other end of the spectrum are Munich and Nuremberg. Projected growth rates in these two regions—which are only a 45-minute train ride apart in the state of Bavaria—approach 2 percent. That’s by no means a blistering pace, but the two regions are clearly outperforming a more sluggish national economy. 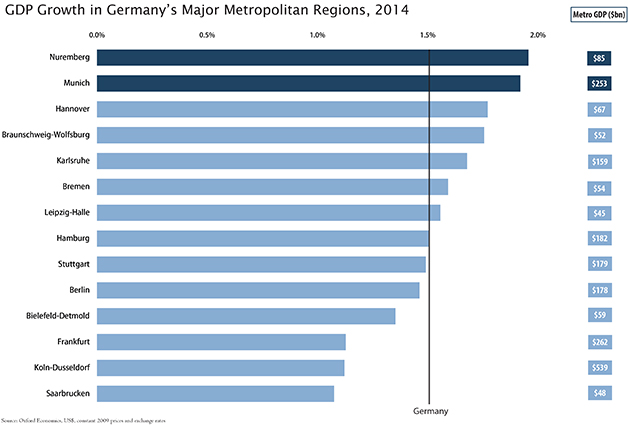 In fact, Munich and Nuremberg have been Germany’s two fastest growing metropolitan regions since 2000, each bolstered by a globally competitive advanced industry sector. Growth in manufacturing output outpaced overall output growth in both Munich and Nuremberg over the past year. And since 2000, during a period where many companies uprooted their manufacturing operations from Western economies to East Asia, Munich’s manufacturing sector has grown faster than the regional economy as a whole.

That’s all to say that amid uncertainty over Germany’s economic present and future, advanced manufacturing in Bavaria remains a competitive force. Later this week we’ll be writing from Nuremberg and Munich, where our Global Cities Initiative will hold its third annual global event, to further explore what drives manufacturing success in these regions. There, we’ll convene U.S. city, regional, and state leaders with their German counterparts to share best practices for supporting advanced industry growth, and in the process establish economic connections between U.S. regions and states and these two German advanced industry hubs.