The Department of Energy’s 17 national laboratories are a $12.5 billion network of potentially transformative basic and applied R&D hubs located in or near many of the nation’s metropolitan areas. However, the labs are today underutilized as true economic assets.

How can they be better leveraged?

There are lots of ideas out there, but as we argue in a new paper, one of the most effective ways for the labs to increase their economic impact is for them to “go local” and engage more in the advanced industry ecosystems within which they reside.

Of course, this recommendation may sound counterintuitive—or even objectionable—to some. Some will question prioritizing economic development as a top goal for these institutions, given their historical mission in basic research and national security. (Los Alamos and Oak Ridge National Laboratories, among others, owe their creation to the Manhattan Project that produced the first atomic bombs during World War II). At the same time, others will insist that the labs are national institutions with global expertise. They will argue that adding a regional focus will weaken—not strengthen—the labs’ ability to support the national economy.

Location and Stewarding Agencies of the 17 DOE Labs 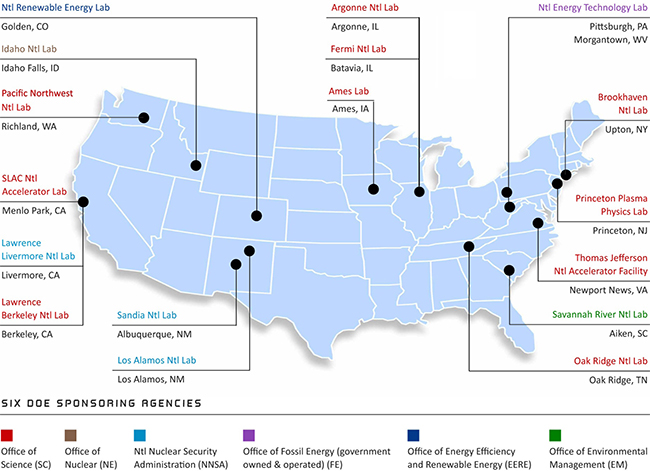 However, we think that going local (at least to an extent) is both justifiable and advisable. President Obama, former DOE Secretary Chu and DOE Secretary Moniz have all already called on the labs to go beyond their basic science missions to support the national economy through greater technology transfer. Essentially, they argue that the labs can and should be critical drivers of U.S. innovation-based growth. Meanwhile, we would say that one way the labs can maximize the use of their scientific competencies for economic benefit is to engage more in their regions. Arguing for that shift is the move in recent decades from “closed” to “open” models of innovation, with the increased embrace of network- and partnership-oriented processes. Moreover, we would note that the preponderance of economic research shows that the geographic clustering of firms, suppliers, labs and universities generates significant mutual advantage through asset sharing, the sharing of skilled labor pools and knowledge spillovers.

Which is why we contend that regional economic development can be an important adjunct to—and expression of—the lab system’s national scientific mission. By engaging more with relevant local industry clusters the labs can contribute more to local and national economic growth as well as profit themselves. For evidence of that one only has to look at some of the locally oriented partnerships that are already making a difference across the system, whether it be Oak Ridge’s Carbon Fiber Consortium or the National Renewable Energy Laboratory’s participation with Colorado’s top universities in the Colorado Energy Research Collaboratory. In each case (and there are many other examples) the relevance of a world-class scientific institute has only been augmented through its regional engagements.

To achieve the new orientation, meanwhile, we suggest more than a dozen frequently administrative, mostly low-cost management tweaks. These would prioritize the labs’ economic and tech-transfer activities; facilitate more interaction with small and medium-sized businesses; increase the institutions’ relevance to local clusters; and provide local lab managers greater discretion. In doing so, the adjustments would seek to update not just the rules and incentives under which the labs operate but also their proud but insulated “behind the fence” culture. Nothing will be easy, of course, but we see significant enthusiasm for greater regional engagement not just at the top of DOE but among the system’s talented cadre of lab directors.

The moment, in short, appears promising. The time is right for a world-class set of innovation institutions to embrace the new economics of geography and participate more fully in the innovation systems of their home regions.