When the United States and Germany meet on the World Cup soccer field in Recife, Brazil on Thursday, new research from the Brookings Institution suggests that some allegiances might not lie where we’d think.

Fully 512,000 U.S. workers receive their paycheck from a German company. Thanks to new data on foreign direct investment (FDI) in U.S. metro areas released last week, we know where to look for the likeliest turncoats. 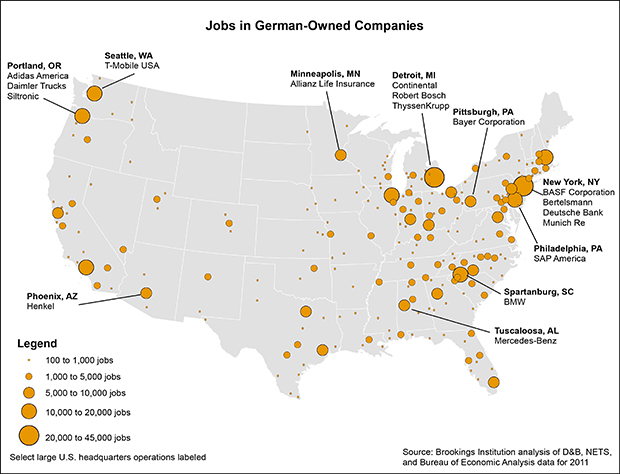 Keep an eye on Portland, OR, where FIFA corporate sponsor Adidas has its U.S. headquarters too.  Meanwhile Continental, another sponsor, has woven itself into automotive industry supply chains in Detroit, Huntsville, San Antonio, and even Virginia Beach.

Of course, Thursday’s game could end in a draw which sees both countries advance. Such a win-win situation might be a good allegory for the U.S.-Germany investment relationship too. In total, German companies had $199 billion worth of FDI deployed in the United States in 2012, while the U.S.-based companies had $121 billion worth of direct investment at work in the (much smaller) German economy at the same time.

A little healthy competition benefits everyone, after all.