In the first week of September 2014, over one hundred celebrities discovered that their most private, intimate images had been exposed to the general public. This is an experience familiar to thousands of private citizens. The non-consensual disclosure of sexually explicit images, often called “revenge porn,” has been on the rise over the last decade. While malicious invasions of sexual privacy predate the Internet, the Internet has greatly increased the ease, speed, and destructiveness of these invasions. Once a hacker or a bitter ex-partner uploads a private image of a victim to an online forum, thousands of people can immediately view it and thousands of sites can immediately link to it. In a matter of days, that image can dominate the first several pages of search engine results for a victim’s name, as well as being sent to everyone the victim knows: spouses, children, friends, and employers. In addition to the trauma of the disclosure itself many victims experience online and offline harassment and stalking, the loss of jobs or educational opportunities, alienation from family members, and depression. Some victims have committed suicide.

Federal law prohibits computer hacking, but disclosing information obtained through illegal cyber-attacks is not. The Computer Fraud and Abuse Act punishes unauthorized access to computers, but it is silent with regard to subsequent disclosures of information obtained by such access. The same is true for most state anti-hacking laws. That means that the people gleefully sharing these images have little reason to restrain themselves, despite the fact that every disclosure of these images harms the victims. It also means that online sites and forums can openly dedicate themselves to the solicitation and celebration of non-consensual pornography, turning sexual humiliation into an industry. Every state criminalizes individual acts of voyeurism, and yet crowdsourced voyeurism is beyond the law. This must change.

Both federal and state criminal laws punish unauthorized disclosures of financial, medical, and business information. The circulation of credit card numbers, health records, or trade secrets without proper authorization all carry serious criminal penalties. Violations of sexual privacy, however – violations not of mere property but of bodies themselves – can be committed with near impunity.

As Vice-President of the Cyber Civil Rights Initiative, I have drafted model federal and state criminal laws prohibiting the disclosure of private, sexually explicit images without consent and with no legitimate public purpose. Fourteen states currently have criminal laws that would apply to some cases of non-consensual pornography, several of them based on CCRI’s model state statute. CCRI is currently working with Rep. Jackie Speier (D-CA) on a federal version of this law. 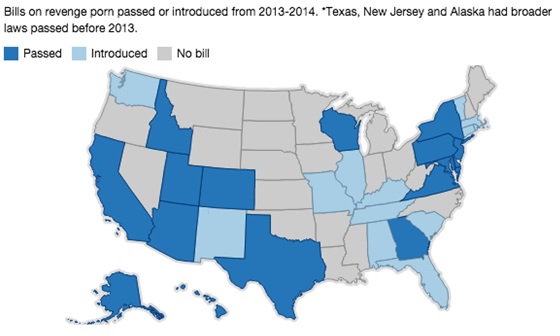 While there is no quick or easy fix to the growing problem of non-consensual pornography, reforming the law so that it reflects a minimum of respect for sexual privacy is a vital first step.

The Quad as a security actor

How do we know when cyber defenses are working?