Yesterday, Pew Research released its State of the News Media 2014 report. Much of the data from 2013’s annual report informed a policy brief Darrell West and I co-authored, Nudging News Produces and Consumers Towards More Thoughtful, Less Polarized Discourse. This year’s iteration contains information about developments in digital native journalism that are relevant for technology policy.

There are reasons for information consumers to be optimistic about social media’s interplay with news media and there are also causes for concern. The powerful effects that social and mobile platforms have on the news process  are changing it entirely. They are “spurring greater audience engagement…One-in-ten (11%) of all online news consumers have submitted their own content (including videos, photos, articles or opinion pieces) to news websites or blogs.”

However, the relationship between the opinions expressed on Twitter and broad public opinion is complex.  Sometimes the opinions on twitter diverge from the general consensus while other times they are aligned. For example, “In the days following the shootings in Newton, Conn., in 2012, nearly two-thirds of the statements on Twitter called for stricter gun control measures while public opinion was far more evenly split.” As Pew states it, “the sentiment expressed around an issue or event can change over time.” Also see the graphic below illustrating how opinions surrounding same-sex marriage and Governor Chris Christie shifted on Twitter throughout a timespan containing key events. 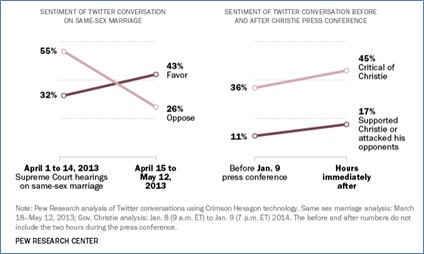 The Pew State of the News Media report argues that digital native startups represent the growth of a nonprofit business model in news. Several of these types of organizations are driven by focusing on content areas adversely affected by economic constraints on the news industry: local news, international coverage, and investigative journalism. In fact, one official at a digital nonprofit described his editorial mission as “filling the holes that chain media outlets swerve around.”

In our paper, we outlined how the demise of local news coverage was contributing to the nationalization, and political polarization, of the news. We discussed failures of local coverage outlets like AOL’s Patch. Yet this year’s Pew report states that local news coverage is growing in one sector of the news industry:  the smaller digital news site.

Many of these smaller news sites “are less than a decade old, about half are nonprofits, most have staffs of five or fewer and many also rely on volunteer and citizen contributors.” The report also points to a list of local news start-ups compiled by Columbia Journalism Review.

Revenue picture of American Journalism, and how it is changing:

The Pew report explains that in 2013 “the business of journalism saw another twist in its digital evolution: An influx of new money – and interest – from the tech world.” Investors have developed creative financing deals for new media ventures similar to the post recession commercial real-estate market.  Last year also brought many shake-ups to the news industry, including, but not limited to:

Pew also states that Omidyar is an outlier in the nonprofit journalism realm due to his level of involvement (he is listed as both funder and publisher) coupled with his massive monetary commitment. The report also alludes to how news sites are experimenting with new revenue streams such as events. A recent Pew Research survey of nearly 100 digital nonprofits found that “28% generated at least some revenue from events in 2011, amounting to roughly $1.3 million.” Other revenue streams consisted of digital marketing services, e-commerce, content licensing and even commercial printing and delivery.

In our paper, Darrell West and I recommended that funders should endow investigative journalists to protect them from external pressures. This type of journalism is also time consuming and expensive, so these financial resources are critical in order to cultivate quality reporting. Pew reports that approximately $150 million is generated through philanthropy for journalism annually, most of it going to public radio stations, and some to digital nonprofits. This figure is according to the most recently available data, yet the revenue streams continue to grow.

In February 2014, Neil Barksy announced the launch of a nonprofit news organization, The Marshall Project, focused on criminal justice. It will operate with a $4 million to $5 million budget (funded by Barksy, foundations and individuals) and will employ over 20 journalists, including Bill Keller, former New York Times executive editor. And as recently as March, the Jerome L. Greene Foundation announced a $10 million grant to New York Public Radio, most of which is earmarked to develop its digital operation. There seems to be a definite trend towards developing digital news ventures, which has grown throughout the past year.

Pew reports that digital advertising in the United States is a $43 billion market. Yet Facebook, Google, and a handful of large tech firms lay claim to most of those ad dollars. News properties earned at minimum, roughly $5 billion—or 12%—of the total digital display ad market, Pew Research calculates.

According to eMarketer, a leading market research firm, both the banner and video ad sectors grew in 2013. “Banner advertising—typically seen as static graphics accompanying text—is the biggest single category within the display ad market. There, total revenue across all content, including news, grew 12% to $9.61 billion in 2013.” YouTube’s success was partially responsible for the growth of online video advertising (video ads embedded into other video content). Revenue from these ads more than doubled in the last two years, increasing from $2 billion in 2011 to $4.14 billion in 2013.

A final piece of the advertising landscape is a controversial one. Native advertising has been on the uptick, but its habit of being mistaken for original content is troublesome. Pew says, “Native advertising, considered a type of display ad, still lacks a concise, agreed-upon definition in the industry but in the simplest terms is a publisher placing paid advertising content, written either in collaboration with the advertiser or directly by the advertiser, on its site in such a way that it mimics editorial content.” BIA/Kelsey projected native advertising to reach $2.4 billion in 2013, up from $1.6 billion in 2012. By the year 2017, it is expected to account for $4.6 billion in revenue. We will be watching to see how these and other trends play out in 2014 as the American journalism landscape continues to evolve.

Last minute messaging for the midterms