Politicians and scholars often lament the persistence of poverty across generations. But affluence persists, too. In the U.S. especially, the top of the income distribution is just as “sticky”, in intergenerational terms, as the bottom. The American upper middle class is reproducing itself quite effectively.

Class reproduction is of course driven by a whole range of factors, from parenting and family structure through formal education, informal learning, the use of social networks, and so on. Some are unfair: playing the legacy card in college admissions, securing internships via closed social networks, zoning out lower-income families from our neighborhoods and school catchment areas. (These “opportunity hoarding” mechanisms are the focus of my forthcoming book, Dream Hoarders.)

It is natural and laudable for parents to want their children to prosper. It is also understandable that they’ll use the resources and means at their disposal to try to reduce the chances of their children being downwardly mobile. They are likely to try even harder if the drop looks big, in economic terms.

There is a significant earnings gap between those at the top and those in the middle. But this gap is much bigger in the U.S. than in other nations, and is getting bigger over time: 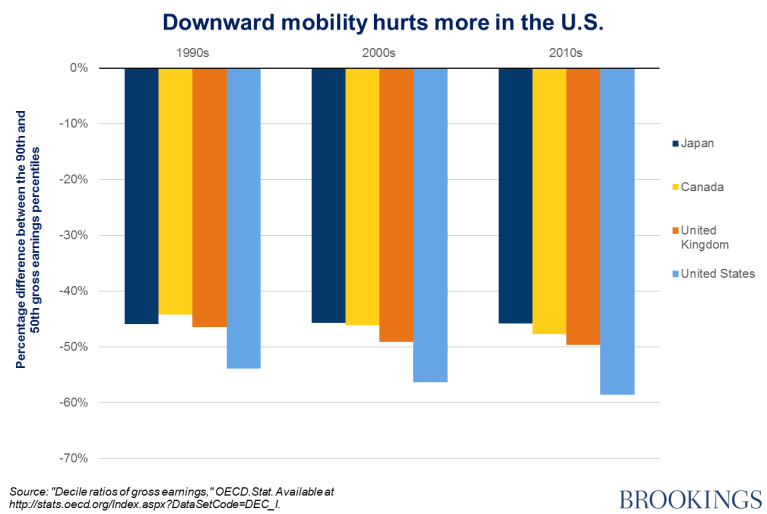 The cost of falling reflects the particular way in which income inequality has risen in recent years: namely, at the top of the distribution. The relationship between income inequality and intergenerational mobility is a much-disputed one, as regular readers of this blog know well. Overall, the evidence for a “Great Gatsby Curve” is quite weak.

Upper middle class Americans do seem worried. In 2011, while around half of American adults making less than $30,000 per year agreed that “today’s children will lead a better life than their parents,” only 37 percent of those making $75,000 or more were as optimistic.

The greater spending of upper middle class parents on “enrichment activities” is well known; recent evidence suggests the Great Recession did nothing to reduce it. American upper middle class parents are desperate to secure their children a high position on the earnings ladder. This makes sense, given the consequences of downward mobility for their economic fortunes. Inequality incentivizes opportunity hoarding, which reduces social mobility. Time, perhaps, to lower the stakes a little?