Community colleges are a vital part of America’s opportunity structure, not least because they often provide a way into higher education for adults from less advantaged backgrounds. Each year there are around 10 million undergraduates enrolled at public, two-year colleges. Among first-generation students, nearly 38 percent attend community colleges, compared to 20 percent of students with college-educated parents.

Credentials from community colleges—whether short vocational courses or two-year associate degrees—can be valuable in the labor market. In theory, community colleges also provide an on-ramp for those seeking a bachelor’s degree; in fact, four out of five students enrolling intend to get a 4-year degree.

But the potential of community college is often unrealized. Many students are not ready. Quality varies. Pathways are often unclear and/or complex. Only about 40 percent of those enrolling earn a degree within six years. Just 15 percent acquire a 4-year degree, according to analyses by Doug Shapiro and Afet Dundar at the National Student Clearinghouse Research Center.

The degree of alignment and integration between community and four-year colleges is much greater in some states than others. Some use common course numbering for 2- and 4-year institutions, which helps students find the classes they need without racking up costly excess credits. In others, universities and community colleges have tried to align their curriculum to ensure that students’ transfer credits will be accepted.

Individual institutions like Queensborough College (part of the CUNY system) and Miami-Dade College have streamlined course sequences to help their students stay on track to transfer into 4-year schools, as Thomas Bailey, Shanna Jaggers, and Davis Jenkins describe in their book, Redesigning America’s Community Colleges. There’s some indirect evidence that these initiatives increased retention and graduation rates.

These policy differences help to explain the very different stories of transfer rates in different states, revealed in a recent study by Davis Jenkins and John Fink. One important measure is the proportion of students transferring out of community college with a certificate or associate degree already in hand: 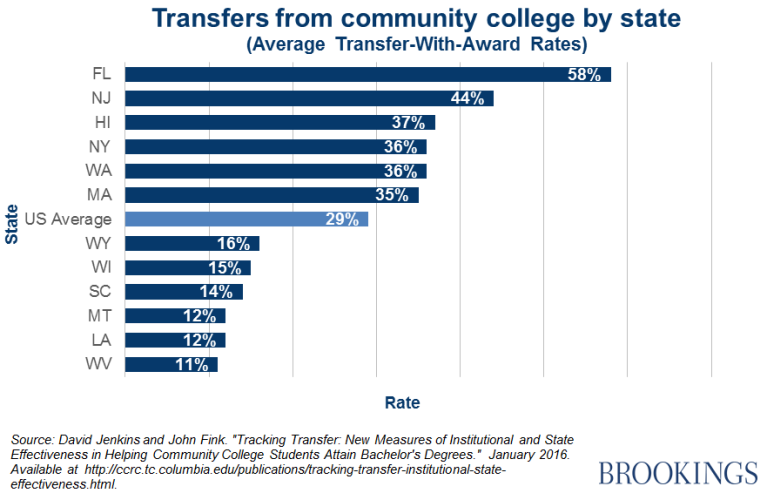 Florida tops the list, partly because of state legislation requiring that community colleges grant eligible transfer students degrees—but also because of concerted investments at the state and institutional levels to improve 2-year institutions.

Another measure of success is the proportion of those who transfer ending up with a four-year degree. Again, there are significant variations between states: 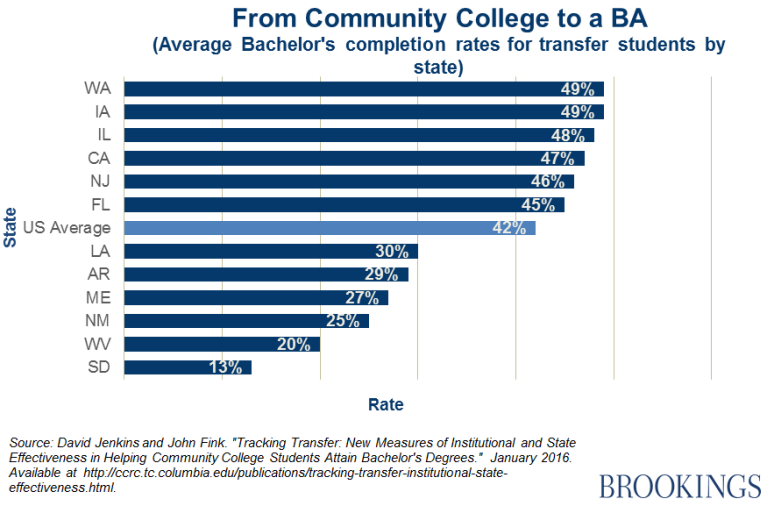 Since community colleges serve so many more students from poor backgrounds, the importance of the transfer pathway for social mobility is clear. Many who struggle at high school may begin to flourish in the first year or two of post-secondary education. As their skills are upgraded, so their opportunities should widen. But too often they become trapped in the silos of post-secondary education. We should continue to support efforts like pathway programs that explicitly attempt to build bridges between community colleges and high-quality four year institutions through the creation of clear and consistent major-specific program maps. Such programs allow students starting out at community colleges to easily chart out the specific, clear, and coherent set of steps needed to eventually finish their post-secondary education with a four-year degree.

The mission of community colleges since their inception a century ago has been to broaden access to education. Today that means providing a solid education to all students, but also providing opportunities to move on to other institutions.